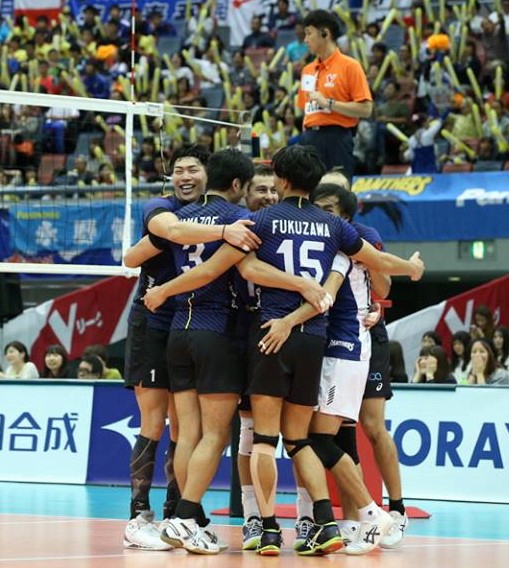 Just like on Matchday 2, two matches of Matchday 3 were played at Komaki, Aichi prefecture, the home for Toyota... Current Photo via V.League

In the first match in Komaki, JT Thunders faced FC Tokyo. FC Tokyo were looking for their first win, while the Thunders were looking to rebound from their loss to Toyota Gosei on Saturday. The Thunders took a comfortable 3-1 win over FC Tokyo and were led by Australian Thomas Edgar with 30 points (25k, 4b, 1a), his third time over 30 in as many games. JT dominated at the net with a 14-3 edge, even their setter Akihiro Fukatsu had 4 blocks. Shohei Yamamoto also contributed 20 points (17k, 3b) for the Thunders. On the FC Tokyo side of the net Bosnian Milan Pepic led his team with 19 points (18k, 1a). FC Tokyo are dead last, which is the same position the team has finished in since the 2014-2015. FC Tokyo have saved themselves in the Challenge Match the last three years.

In the late match in Komaki, the Toyota Gosei Trefuerza met JTEKT Stings. As both teams were tied on wins, points and sets ratio, the winner would jump ahead of the other. The Stings took the first set 25-20, which Toyota came back to match in the second set with the same score. The next two sets were tight, but Trefuerza took them both to win the match 3-1. Trefuerza as it has seemed the last three seasons just set Croatian Igor Omrcen. Omrcen had 45 points, 43 kills on 68 swings with only 4 hitting error, plus a block and an ace. Toyota teammate Takuya Takamatsu had 15 points (12k, 1b, 2a). Bulgarian Matey Kaziyski had 16 (14k, 1b, 1a) for JTEKT. JTEKT did have 13 blocks in the match with Akitomo Kanamaru and Sho Kuboyama each with 4 blocks.

Moving to the Osaka matches, Suntory Sunbirds hosted the Toray Arrows. Suntory was looking for their first win of the season, while Toray was looking to continue their winning streak. Toray won the first set, but Suntory blew them out in the second. While the third set was close, Suntory pulled away in fourth to take the match 3-1. Cuban Yadrian Escobar led all scorers with 21 points (19k, 1b, 1a) for Suntory. His teammate Masashi Kuriyama had 5 blocks and 16 points (11k) to help in the win. Toray was led by Canadian Gavin Schmitt with 19 points (15k, 3b, 1a). Suntory moves to 5th in the standings, while Toray is 6th.

In the final match of the day, there was another Osaka derby between Panasonic Panthers and Sakai Blazers. Sakai is based on the southern edge of Osaka, while Panasonic is on the north side of Osaka. Panasonic easily handled the first two sets against Sakai. The Blazers won the third in extra points. However, Panasonic won the close fourth set 25-22 to win the match 3-1. Panasonic was just dominating at the net winning the blocking battle 19-7. Kunihiro Shimizu, Kenji Shirasawa and Poland’s Michal Kubiak each had five blocks for Panasonic. Shimizu led Panasonic with 24 (19k) points. Sakai’s Brazilian Wallace Martins led all scorers with 27 points (26k, 1b). Panasonic is tied with Trefuerza in wins, points and sets ratio.