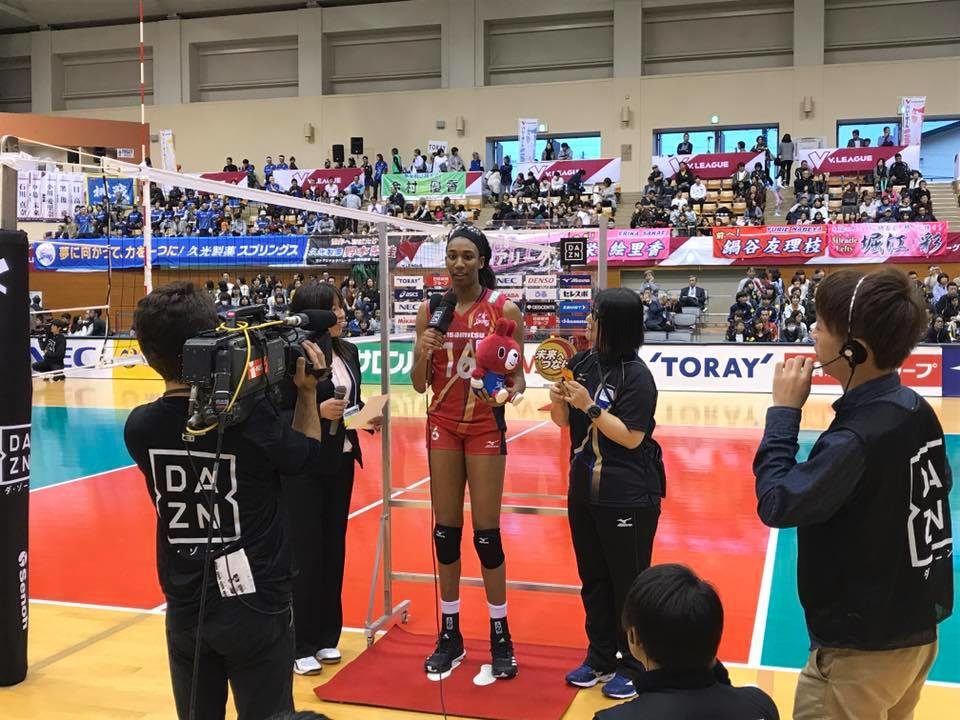 For Matchday 3, two matches were played in Hitachinaka, Ibaraki prefecture, the home for Hitachi Rivale and the other two... Current Photo via Hisamitsu Springs

In the first match in Takamiya, Hisamitsu Springs faced off with Denso Airybees. A win would keep Hisamitsu at the top with a 3-0 record, while Denso were looking to continue a winning streak. Denso took the lead with the win of the first set, but Hisamitsu held their ground in the next three sets, winning the match 3-1. The Springs were incredibly efficient with a team wide .446 hitting percentage. The Springs Rika Nomoto led her team with 26 points (24k, 2b). American Foluke Akinradewo was dominant in the middle with 20 points, 5 of them blocks. Yurie Nabya with 20 points (all kills) and German Christane Furst with 19 points (15k, 2b, 2a) are basically carrying Denso with little help.

In the second match in Takamiya, JT Marvelous battled Toray Arrows. The Arrows were looking for their first win, while JT is trying to keep pace with Hisamitsu. Both teams split the first two set, but the Marvelous dominated in the third and had to hold on in the fourth to win 3-1. Serbian Brankica Mihajlovic for JT led all scorers with 27 points (23k, 1b, 3a). JT controlled the net with a 13-6 blocking win, 5 of which were by JT’s Aika Akutagawa. Toray is dependent on three players Mari Horikawa 15 (14k, 1b), Ai Kurogo 14 (12k, 1b, 1a) and American Kadie Rolfzen 14 (10k, 1b, 3a). Excluding those three players and opponent errors Toray got 16 points (10k, 3b, 3a)  in 4 sets of play. Toray is last team not to win this season.

Now shifting to the games in Hitachinaka, Toyota Auto Body Queenseis met Ageo Medics. The Medics dominated the first set and kept the momentum going in the second. Queenseis came back in the third set, but could not take the fourth set, with Ageo winning in extra points 26-24, to take the match 3-1. Ageo were successful by giving the ball to Cuban Kenia Carcaces leading all scorers with 34 points (31k, 2b, 1a). Turkey’s Neriman Ozsoy for Queenseis had 23 points (17k, 5b, 1a). Erika Araki was not her blocking self with only 1 today, but she still had 17 points (13k) and 3 aces. Toyota and Ageo are tied at a record of 2-1.

In the last match at Hitachinaka, the host Rivale faced NEC. Both teams have gotten off to slow starts this season and were looking for some momentum going forward. Hitachi struck first winning the first set,  but each split an easy second and third set, with Hitachi leading 2-1. Hitachi took the tight fourth set 25-23 to win the match 3-1. Former Japanese national team player Megumi Kurihara led Hitachi in scoring with 23 points (21k, 1b, 1a) and closely followed by her teammate Miwako Osanai  with 22 (all kills). NEC was led by Mizuki Yanagita with 18 points (14k, 1b, 3a) and Misaki Yamauchi with 17 (15k, 1b, 1a). American Cursty Jackson had 16 (13k, 1b, 2a) for Hitachi