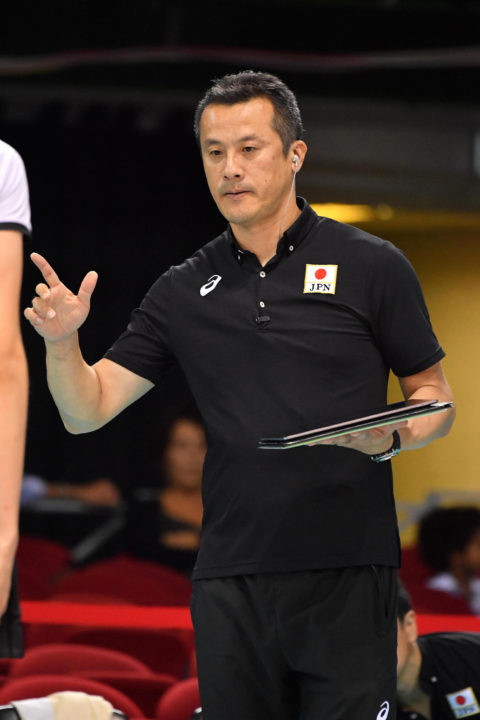 Sports Nippon, one of the leading Japanese sports daily newspapers had an article with a headline of “Nakagaichi Denies Possibility of Resignation after World Championship Defeats.” Nakagaichi said to Sports Nippon at the airport, “I am trying to continue strengthening the team with a goal towards the Tokyo Olympics in 2020.” The paper noted that results of the Japanese men’s national team at the World Championships were the worst ever with a 17th place (tied with other 5th place finishing teams). Nakagaichi had stated a goal of finishing in the top 8 prior to the tournament. Japan did lose to two teams ranked below them in the FIVB World Rankings and also our Volleymob/Brahm Rankings in Belgium and Slovenia.

Nakagaichi stated that he does not feel that the gap for Japan’s men team when compared to some of their opponents is not as high as the press appears to believe. Looking at the points difference for Japan in their matches against Italy, Belgium, Slovenia and Argentina. Japan were -11 in 3 sets to Italy, -19 to Slovenia in 4 sets, -8 to Belgium in 4 sets and +2 to Argentina in 5 sets. So in 16 sets of play, Japan was -36 points or 2.25 points behind their opponents per set. A missed serve here, or a missed spike there is the difference between the set being won or lost.

Looking at Japan’s team stats, they were middle of the pack in hitting percentage at .352 (13th), and third worst in blocking with 26 blocks in 19 sets played or an average of 1.37 blocks per set. In 5 matches, Japan was outblocked by their opponents by 23, or 1.21 blocks per set.

With serves, Japan were 11th in aces with 23 or 1.21 aces per set. Japan’s digs (digs + receptions) were at 10 per set (112+78=190/19). Japan was tied at 12th with Finland and the Netherlands in their digging. One of the surprising statistics is that Japan was ranked 4th in serve receive efficiency with 32.75%. Only France, Slovenia and the USA were ranked higher than them. So if Japan could turn their serve receive into a higher hitting percentage, it would take pressure off of Japan’s block which is one of their weak points.

Still with that said, Japan has been looking for consistency in their coaching staff as they have had three coaches since 2013, Gary Sato (2013-2014), Masashi Nanbu (2014-2016) and Nakagaichi who started in 2017. In my mind Nakagaichi has made progress with a young team with some surprising wins in the VNL this past summer. Additionally, some of his team has started to play overseas, which will greatly improve their skills compared to the domestic V.LEAGUE. Whether the Japanese Volleyball Association sees it that way is a another story though.