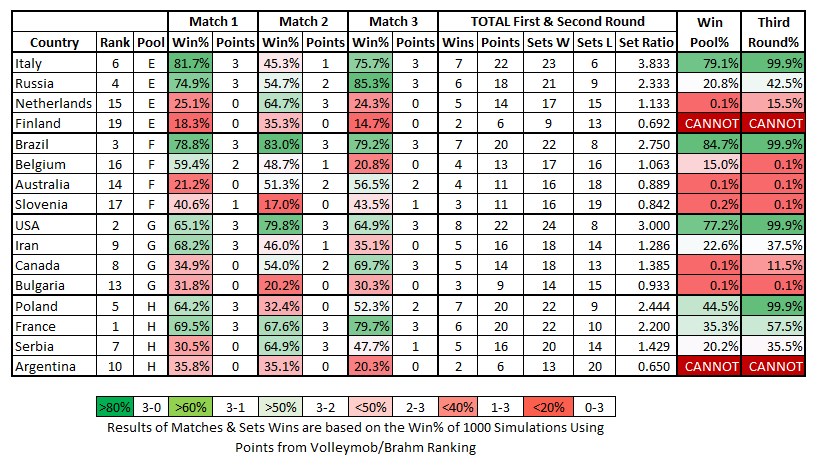 With the first round of the 2018 FIVB Volleyball Men’s World Championship complete, it is time to look back at... Current Photo via Jeremy Brahm

With the first round of the 2018 FIVB Volleyball Men’s World Championship complete, it is time to look back at our first round predictions and also look at the second round.

Before the first round started, we made our predictions and we correctly predicted 14 out of the 16 second round teams. As a reminder, we used the points that each team had accumulated over four years as our base predictor. Slovenia and the Netherlands were the two teams that I was off on predicting. However, if you look at what I thought would happen between the Netherlands and China was very close. Yet, the upsets of France and Brazil were a big reason that I was off of them. Let alone Slovenia’s wins over Belgium and Japan. I had felt that their performance in their 2017 World League Group 2 play would come out in the World Championships, which it did. Japan did not win the matches that I expected them to win and were eliminated. Still hitting 87.5% of the teams was a good result.

Moving onto the second round, it gets a little trickier because all of the results carry over from the first round. So if a team is behind by a win or more, the chances for making the third round are very difficult and that is not even taking into account a gap in points. Any remember wins are the first tiebreaker, then points, then sets ratio and finally points scored ratio. Additionally throw in that the two best second place teams also make the third round as well. It gets a little complicated.

Looking at each pool, here is who I will think advance to the third round:

Italy come in with a perfect record at 5-0 and 15 perfect points. They have a 1 match lead over the Netherlands (4-1, 11 points) and an even more important 4 points lead. Italy is two wins and 5 points ahead of Russia (3-2, 10 points). So even if Italy loses a match, they would still be ahead of the second place team. Finland at 2-3 and 6 points basically mathematically eliminated before even a match starts by being 3 wins and 9 points behind Italy and still more than 3 points away from the Netherlands and Russia.

With my model, I have Italy losing to Russia in their second match, but winning against Finland and the Netherlands, which would have them win the pool at 7-1 and advancing to the third round. I have Russia winning all of their second round matches and taking the second place at 6-2 with 18 points. We’ll comeback at the end to see if they are one of the two best second place teams. The Netherlands are only favored against Finland in the second round, and while they have upset France and Brazil already, taking down two other big fish in Italy and Russia may be to big of an order and they will finish third. Finland is just overmatched and will finish in fourth.

Brazil came out of a very tough Pool B in first place at 4-1, 11 points. Brazil may be lucky to be in the position that they are in as they are basically 80% favorites in each of their three second round matches. Brazil can also take advantage of Belgium and Slovenia playing each other at 3-2 in the first match to gain an additional win gap with a win over Australia in Brazil’s first match in the second round. Then it would just be a head-to-head matchup with the winner of the Belgium vs. Slovenia to win the pool. As Brazil already has an 80% chance, they are almost a lock in my mind. Technically Australia is ahead of Belgium and Slovenia, but I have a feeling that three teams will have a match go five sets as Belgium and Slovenia did in the second round. Belgium will be second placed team at 4-4 with 13 points, Australia 3rd also at 4-4, but with 11 points and Slovenia fourth at 3-5 with 11 points.

On paper it looks like a good group, but the USA at a perfect 5-0 with 13 points, is set up to clinch a berth in the second round. While Iran is close at 4-1 with 12 points, the USA just needs to finish second to advance to third round in my mind. With a two win and 4 point advantage over Canada and Bulgaria, finishing in second place looks likely for the USA. Additionally, the USA has both of those teams first to play. If they win both of those matches, the USA will have reached 7 wins, which would all but guarantee one of the best second place positions to them. Three current second place teams are at 4 wins, so they would have to win out to reach 7 wins.

Iran are in second right now, but their match against Canada will make or break them. A win gives them a chance at being one of the second place teams to advance to the third round, however a loss would put them in a must win against the USA, who would have already won the pool on the final day. They are favored against Bulgaria, but not the USA.

Canada will probably finish third in the pool with right now with wins over Iran and Bulgaria. The tournament co-hosts Bulgaria are not favored in any of their three matches and will finish fourth.

Poland at 5-0 and 15 points have a win and 3 points advantage over Serbia in second place. France is 2 wins and 4 points behind. Argentina is basically mathematically eliminated at 2-3 with 6 points after the first round.

Poland is favored in the Argentina and Serbia matches which would take them 7 wins. Again this would all but guarantee them at least a second place spot to qualify for the third round. France is still ranked #1 in my ranking system and favored over all three teams in their pool. If the French can run the table in the third round, it gets them to 6-2 with 20 points. Serbia need to defeat France to have a chance for the second round. If Serbia defeat France, a win over Poland could have them win the pool. Argentina are not favored in any match and will probably finish fourth.

If both France and Russia run the table in their pools, they will reach 6 wins. They will both overcome teams with better records in the first round in the Serbia (4-1, 12 points) and Netherlands (4-1, 11 points) respectively.

Belgium will just have teams in Australia and Slovenia are about at the same strength as them and that may see them split their matches, causing them to lose ground to the other second placed teams.