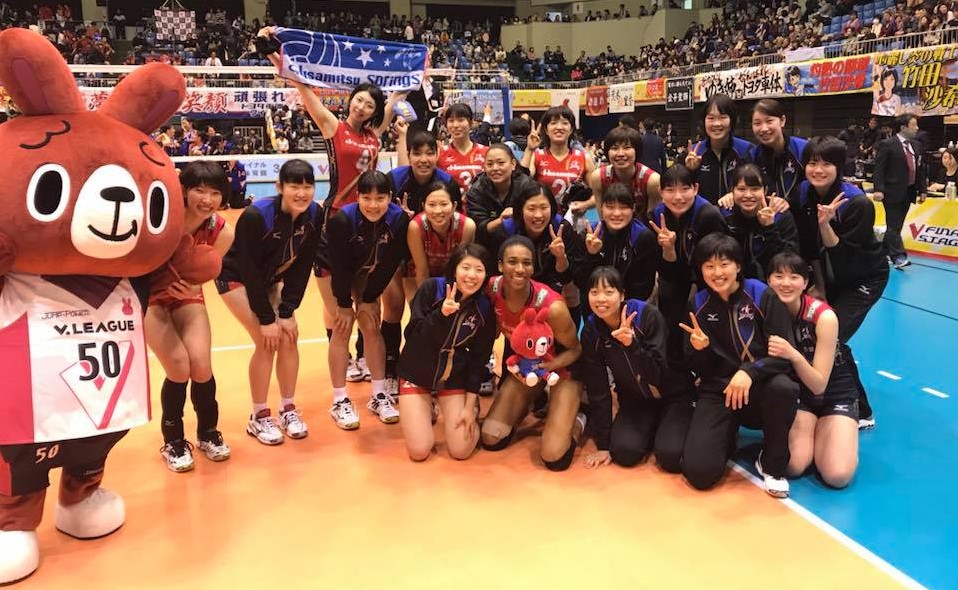 With a 1-0 Final 3 (Semifinal) series lead, the Hisamitsu Springs with a win would get a rematch against the JT Marvelous in the Final. While the Toyota Auto Body Queenseis needed to win on Sunday to force a 25-point “Golden Set.”

In the first set, it stayed close through the first TTO with the Springs leading 8-7. After being tied at 10 all, Hisamitsu went on a 6-0 run to take a 16-10 lead. The Queenseis responded with four straight to bring the Springs lead down to two at 14-16. The Springs came back the a 3-0 run, which would give them a big enough lead to win the set 25-17 and take a 1-0 set lead.

Down a set, the Queenseis needed to fight back to give themselves a chance in the match and Toyota took an 8-7 lead at the first TTO. At the second TTO, a Nana Iwasaka spike gave the Springs a 16-15 lead. The Springs went on a 4-1 run to expand the lead to four at 20-16. Hisamitsu won the set on a service error by Toyota 25-20, to take a 2-0 set lead in the match.

The third set was just pure domination from the beginning by Hisamitsu. The Springs had a 6-3 lead, but a missed freeball pass by Toyota that touched the net gave Hisamitsu a 7-3. On the next point, Hisamitsu blocked the ball three straight times on the play and on the fourth, Neriman Ozsoy hit into the net. That seemed to be how the third set went for Toyota, nothing getting over the net and if it did it came back harder. Or worse, the Queenseis were flying all over the court just to keep things in play, while Hisamitsu seemed under control. The Springs extended their lead to 12-4, and the match was all but over at that point. Hisamitsu continued to dominate winning the set 25-12 and sweeping the match 3-0.

The serving of Hisamitsu really caused Toyota serve receive problems as the setter could not use all of the hitting options, let alone overpasses or freeballs for the Springs to score from. Just from spiking Hisamitsu was +9 on kills and -8 on hitting errors, for +17 points. Throw in five more blocks by Hisamitsu and it was a blowout.

Yuki Ishii (16k, 1b) for Hisamitsu and Neriman Ozsoy (15k, 1b, 1a) for Toyota tied with 17 points as the match’s leading scorers. Foluke Akinradewo had 14 (12k, 2b) and was named MVP of the match in the win for the Springs. Her teammate Nana Iwasaka also had four blocks to lead all players. Next a rematch with the JT Marvelous in the two-match Final. Only wins count, so if the teams split both matches, a 25-point “Golden Set” will be played.

Schedule for the Women’s Final