Japan Women: Hisamitsu is Dominant at 9-0 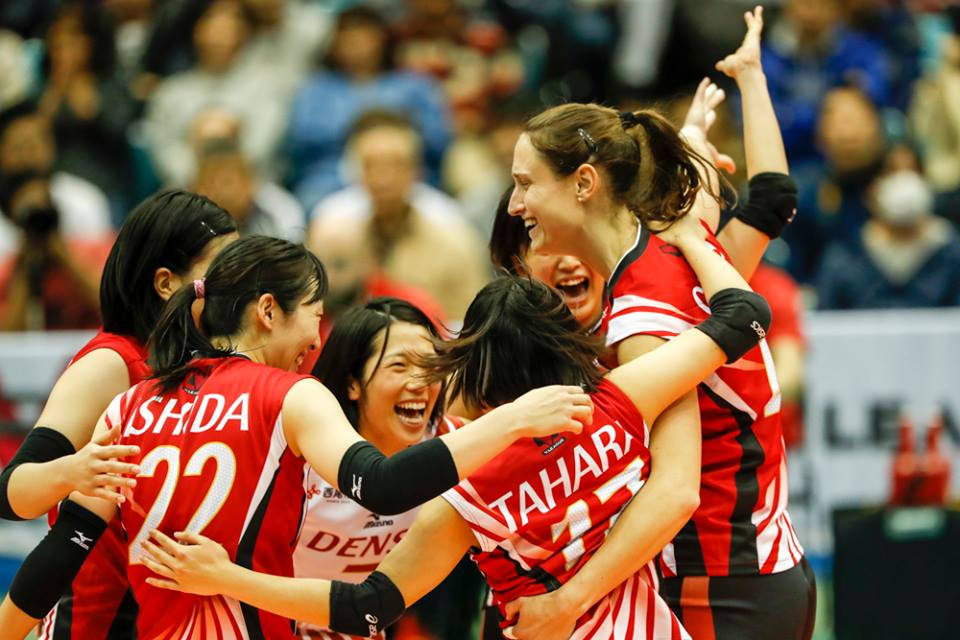 After 5 weeks of the Japanese women’s V.League, the Hisamitsu Springs are dominating the league and may not be stopped.... Current Photo via V.League

After 5 weeks of the Japanese women’s V.League, the Hisamitsu Springs are dominating the league and may not be stopped. The Springs have won all 9 matches this season, only reaching 5 sets once.

On Saturday the 18th, the Springs got an incredible performance from American Foluke Akinradewo with 7 blocks against the Denso Airybees. Akinradeo added 17 kills and an ace for a total of 25 points. Yuka Imamura also had 23 (22k, 1b) for the Springs. Mizuho Ishida (14k, 2b, 1a) and Yurie Nabeya (14k, 3b) each had 17 for the Airybees.

Toray Arrows took Toyota Auto Body Queenseis to a fifth set and won in extra points 18-16 to take the match 3-2. Toray’s triple threat of Mari Horikawa 21 (19k, 2b), American Kadie Rolfzen 25 (22k, 2b, 1a) and Ai Kurogo 19 (17k, 2a) gave them the power to come from behind. The Queenseis were very dependent on their Turkish opposite Neriman Ozsoy with 39 points (37k, 2b). The team had 24 kills between the remaining players. Erika Araki of Toyota led the match with 5 blocks.

NEC Red Rockets also swept Ageo Medics 3-0. NEC had a well balanced attack with four players in double figures. Ageo as has been the case all season, put their offense in Cuban Kenia Carcaces arm and she led all scorers with 21 (19k, 1b, 1a). Mizuki Yanagita for NEC had 13 points.

With the matches on November 19th, Hisamitsu met NEC for the second time in the season. NEC is still trying to reach their level as champions from last season. NEC put on a much better performance than in the first match, pushing Hisamitsu to extra points in the first and second sets, but Hisamitsu won them both 26-24. In the third, set Hisamitsu got a lead and NEC could not catch up and the Springs swept 3-0 to remain perfect on the season. Hisamitsu had their their 5 hitters between 9-12 points, which is great balance and means that the Springs are tough to stop. Sarina Koga had 19 (18k, 1a) for NEC in the lose.

In the Denso vs. Ageo match, serving played a critical role in determining the winner. Yurie Nabeya had 7 aces, while three teammates each had 2 aces. Ageo only managed 2 aces, so +11 to Denso before the service errors were added. Denso only had 3 service errors, while the Medics had 17, -14 to Denso. So the service line was a 25-point or 1 set advantage to the Airybees. The Medics even had 8 more spiking errors than Denso, so it was not meant to be as Denso won 3-1. Kenia Carcaces was the offense and defense with 21 kills and 6 blocks for Ageo. Her Japanese teammate Ayaka Matsumoto had 4 blocks in the loss. Nabeya finished with 22 points (14k, 1b) and her German teammate Christane Furst had 13 points (9k, 4b) in the win.

JT Marvelous faced the Toray Arrows and JT’s Mihaljovic and Toray’s Horikawa essentially fought to a draw with 25 (24k, 1a) and 26 points respectively. However, JT’s supporting cast dominated at the with 7 more blocks (11-4), 4 more kills and 3 fewer hitting errors. JT’s Japanese national team player Mai Okumura had 5 blocks and her JT teammate Aika Akutagawa had 4 blocks. Kadie Rolfzen with 12 (11k, 1b) and Ai Kurogo 14 (11k, 3a) were a little off for Toray in the loss.

Hitachi met Toyota Auto Body in a very competitive match that went five sets. Toyota had lost three in a row, while the Rivale had lost five in a row. Hitachi used a balanced offense with Megumi Kurihara 21 (17k, 1b, 3a), American Cursty Jackson 25 (22k, 3b), Moemi Tohi 16 (14k, 1b, 1a) and Miwako Osanai 14 (13k, 1b) to win the battle at the net. Neriman Ozsoy had 33 (31k, 2b) points for the Queenseis in response. Erika Araki with 3 aces and Aya Watanabe with 4 aces as well, kept Toyota in the match. However, Hitachi won the match 3-2 in an upset. Even with the win Hitachi is still in last place, while the Queenseis are in 3rd.