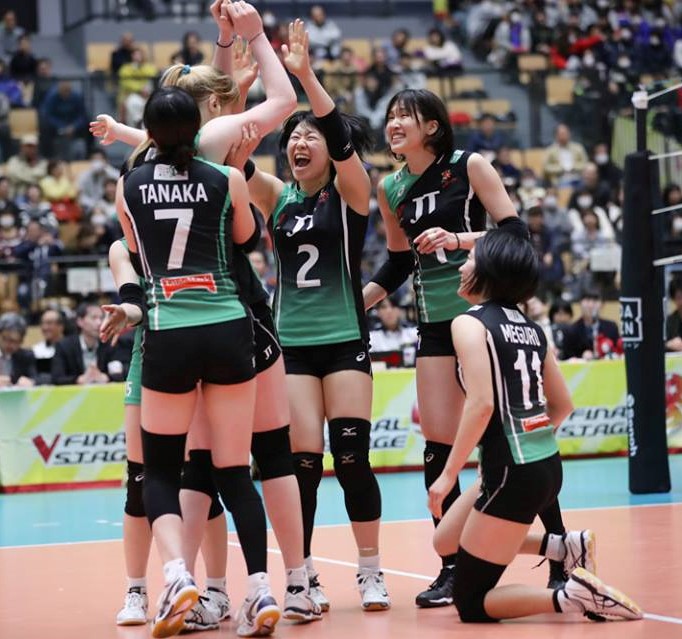 With Sunday’s matches in the Japanese Women’s V.League, all teams will two matches or fewer remaining in the Final 6.... Current Photo via Japan V.League

With Sunday’s matches in the Japanese Women’s V.League, all teams will two matches or fewer remaining in the Final 6. Hisamitsu Springs and JT Marvelous had already clinched their berths in the Final 3 (semifinal), but were still looking to clinch a direct berth for the Final by finishing first in the Final 6. Any slip up by either team would force them into the Final 3.

Hisamitsu faced the Denso Airybees in the first match of the day. Both teams split the first two sets and the third set could prove pivotal in the match. The third set was very tight throughout as went to extra points. A Yuka Imamura spike gave the Springs a 29-28 lead. A sprawling dig by the Springs libero Mana Toe gave them a chance to end the set, which Risa Shinnabe did with a cross court spike to win the set 30-28 and take a 2-1 lead. The Springs said, “Enough!” and just dominated the fourth set to win comfortably 3-1. The Hisamitsu Springs are still perfect at 25-0. Hisamitsu’s Yuki Ishii and Denso’s Nanaka Sakamoto tied for highest scorer with 21 points as both had 20 kills and 1 block. American Foluke Akinradewo contributed 18 915k, 3b) in the win for the Springs. For the Airybees Mizuho Ishida also provided 20 points (18k, 2b) to keep them in the match. Yurie Nabeya who is very reliable for Denso had an off day with only 10 points (all kills), but three hitting errors on 40 attempts for a .175 hitting percentage.

In the other match of the day JT Marvelous met NEC Red Rockets. A loss by the Marvelous would give Hisamitsu a berth in Final, so a win was a must for them. NEC was looking to move up in the Final 6 with a win. The first two sets were very tight, but split at 1-1. In the third set, the Marvelous had a lead at 21-19, but NEC tied the set at 24 to force extra points. Brankica Mihajlovic his off the block to give the Marvelous a 25-24 lead and then aced a serve off the top of the net to win it 26-24. Just like Hisamitsu in the fourth set, the Marvelous jumped to an early lead and kept extending it to comfortably win 3-1. With the win, Hisamitsu and Marvelous will meet on Saturday for a berth in the final. Hisamitsu has a one point advantage and also the better regular record if tied of points, even with a JT win. Their scenarios are explained below. Mihajlovic was again the driving force for JT with 33 points (31k, 2a) to lead all scorers. Mizuki Yanagita with 18 (all kills) and Haruyo Shimamura with 17 (16k, 1b) for NEC kept them in contention in the loss. NEC is still alive, but they’ll need to win their final two matches to have a chance of reaching the Final 3.