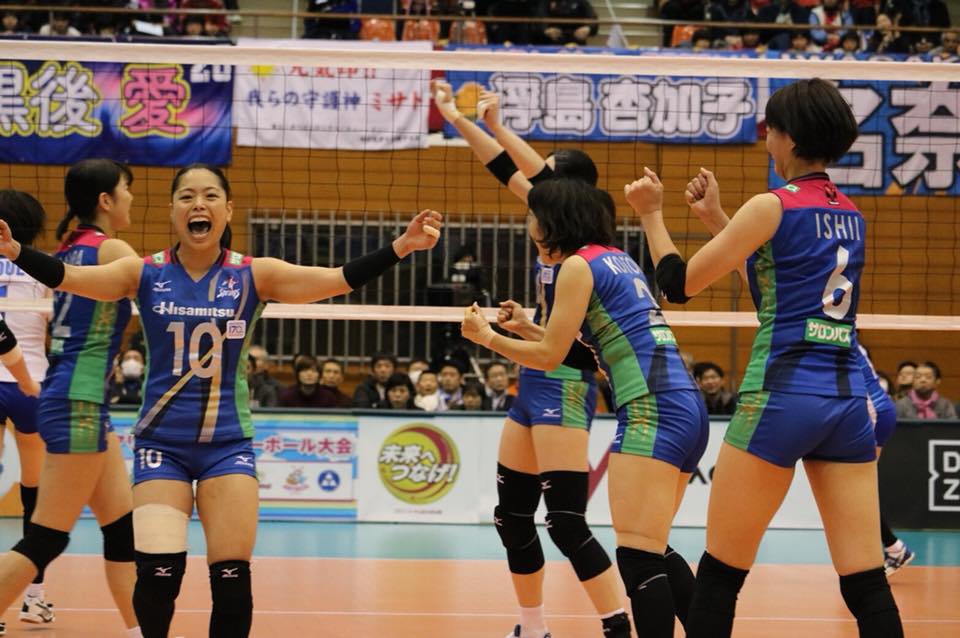 With the break for the Empress’s Cup over the next two weekends, the V.League’s Matchday 15 would be the last... Current Photo via Hisamitsu Springs

With the break for the Empress’s Cup over the next two weekends, the V.League’s Matchday 15 would be the last league play for 2017. Hisamitsu was looking to keep their perfect record intact as they faced the Toyota Auto Body Queenseis. Toyota had lost their last two matches and a win over the Springs would be a great way to finish the year. This match was very odd as Hisamitsu dominated the first and third sets that they won, but the Queenseis second and fourth set wins both went extra points. This forced the match to go to a fifth set, which Hisamitsu dominated 15-6 for the Springs to remain perfect 15-0. The final score of this odd match was Hisamitsu 120, Toyota 100. A five set blowout for the Springs. Neriman Ozsoy was the leading scorer in the match with 40 points (35k, 2b, 3a) for Toyota. Hisamitsu had three players above 20 points, Yuki Ishii with 30 (27, 1b, 2a), American Foluke Akinradewo with 22 (18k, 2b, 2a) and Rika Nomoto with 21 (19k, 1b, 1a).

NEC Red Rockets and Hitachi Rivale also played a five set match, that possibly would eliminate Hitachi from the Final 6 playoffs. Rivale took a 2- set lead, but collapsed in the fourth set 25-14 to force the match to go five. The Rockets took a 6-5 and then expanded their lead to 6 points, which was the gap at the end for the 3-2 NEC win. NEC outblocked Hitachi 10-5 and outserved Hitachi as well by 7 points (+2 aces and -5 service errors) to decide the match. Sarina Koga for NEC had 25 points (20k), 5 of which were blocks, leading all players. Miwako Osanai for Hitachi led their attack with 19 points, all kills. NEC with the win moved into 5th place.

JT Marvelous tried to keep pace with Hisamitsu when the faced the Toray Arrows. JT won a close first set 25-22, but Toray could not get any closer in the next two sets, a JT sweep 3-0. JT won the service line by +12 points (+2 aces and -10 service errors). Serbian Brankica Mihajlovic for JT led all scorers with 20 points. Toray’s three musketeers of Ai Kurogo, Kadie Rolfzen and Mari Horikawa scored 35 of the teams 43 offensive/blocking points and received no support from their teammates. The loss dropped Toray to 4th, while JT maintained their 2nd position.

Denso Airybees met Ageo Medics and had a long first set, with the Airybees winning it 31-29. Ageo tried as they have all season to have the offense go through Kenia Carcaces with 80 attempts in a three set match. Carcaces had 35 kills, but her efforts were in vane as Denso comfortably swept the match 3-0. Yurie Nabeya with 16 (14k, 2a) and Nanaka Sakamoto with 14 (13k, 1a) led the Airybees in scoring in the win. Denso moved into 3rd place with the win, while the Medics remained in 7th place. 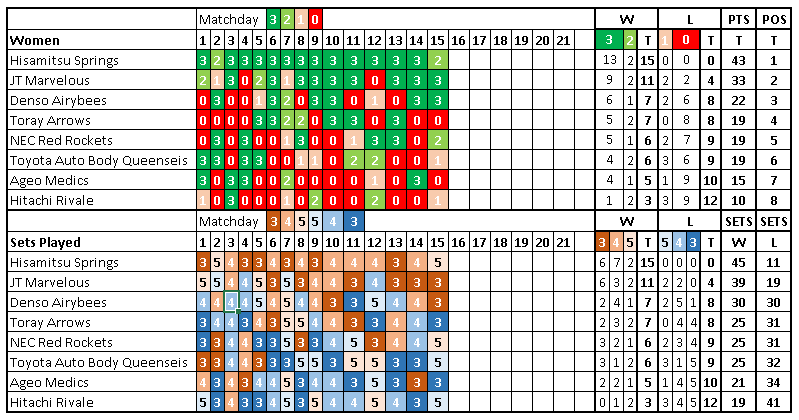