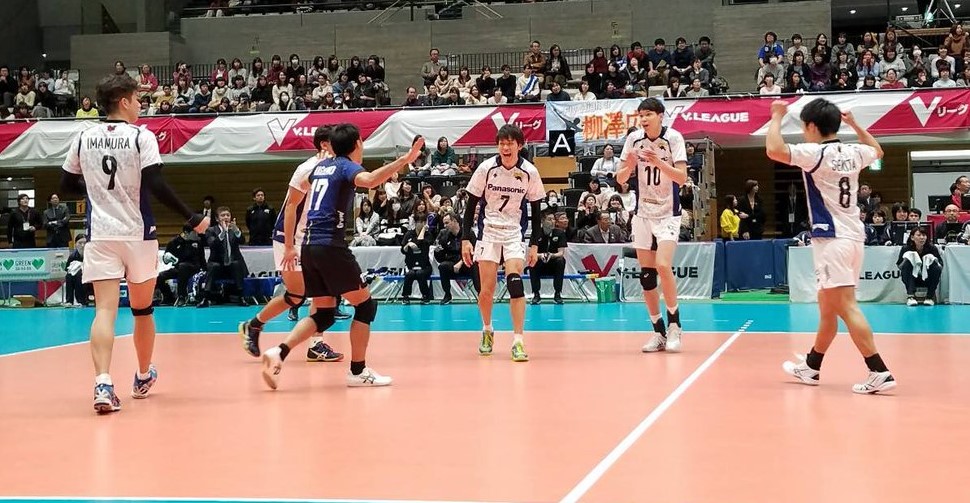 With the break for the Emperor’s Cup over the next two weekends, the V.League’s Matchday 14 would be the last... Current Photo via Panasonic Panthers

With the break for the Emperor’s Cup over the next two weekends, the V.League’s Matchday 14 would be the last league play for 2017. FC Tokyo had been winless and had only pushed an opponent once to five sets faced Sakai Blazers. Sakai lost a tough fought match to Panasonic on Matchday 13, which placed them solidly in 7th place. FC Tokyo came from behind late to win the first set 25-22. Tokyo gave up a 4-point in the 2nd, but held on to take 2-0 set lead. Tokyo jumped out to a lead again in the third set. After Sakai brought the match to a 16-18 score, Tokyo had a 7-3 run to win the third set and the match in a sweep for their first win of the season. Bosnian Milan Pepic was the leading scorer for FC Tokyo with 25 points (21k, 2b, 2a) and with a very efficient hitting display by his teammates gave the Tokyo the win. Sakai’s Wallace Martins led his team with 24 points (23k, 1b).

Toyota Gosei Trefuerza faced JT Thunders in a battle for 2nd place. JT started the day in 2nd, but if results went their way, Trefuerza could jump into 2nd. Without their Croatian superstar Igor Omrcen, I would have expected an easy win by the Thunders, and the first set went to the Thunders 25-22. However, Toyota got great performances from Takuya Takamatsu and Shuzo Yamada with 24 (21k, 3a) and 21 (20k, 1b) points respectively in a 3-1 comeback win for the Trefuerza. Australian Thomas Edgar had 24 points (22k, 2b) for JT, but the Thunders were not as efficient as Toyota at the net who outscored them by 11 points (+7 kills and -4 errors). Toyota jumps into 2nd place while, while JT falls to 4th.

Toray Arrows met the Suntory Sunbirds and this was a tight match until the 4th set. Toray won that set 25-16 to force a fifth set. Toray was down 9-7 in the fifth set when they took their last timeout. The Arrows scored 4 straight points to lead 11-9. A further 4-2 run for the Arrows gave them match 3-2. Canadian Gavin Schmitt for the Arrows was just a little better than Cuban Yadrian Escobar was for the Sunbirds. Schmitt had 35 points (31k, 2b, 2a), while Escobar provided 28 (26k, 2a) in the loss. Toray’s blocking combination of Haku Ri and Takaaki Tomimatsu each had 4 blocks each and help give a 12-9 edge to the Arrows. Toray with the win moves into 3rd place, tied on wins with Trefuerza but one point behind. Suntory maintains their 5th place position.

With a four-match lead over all competition the Panasonic Panthers expected little difficult against the JTEKT Stings. The Panthers were wrong as the Stings dominated the first set 25-18. Panasonic was then forced into extra points to win the second set to tie the match at 1 set all. Michal Kubiak did not start the match, but the Panthers took out their normal setter Hideomi Fukatasu and opposite Kunihiro Shimizu after two sets. These three players did play as substitutes in the third and fourth sets, but even the backups of Masahiro Sekita and Takahiro Imamura helped propel the Panthers to their 9th win in a row after a difficult third set. Tatsuya Fukuzawa for the Panthers had 18, while Bulgarian Matey Kaziyski for JTEKT had 28 points (24k, 4b) in the loss. The win allowed the Panthers to clinch a berth in the Final 6 playoffs. 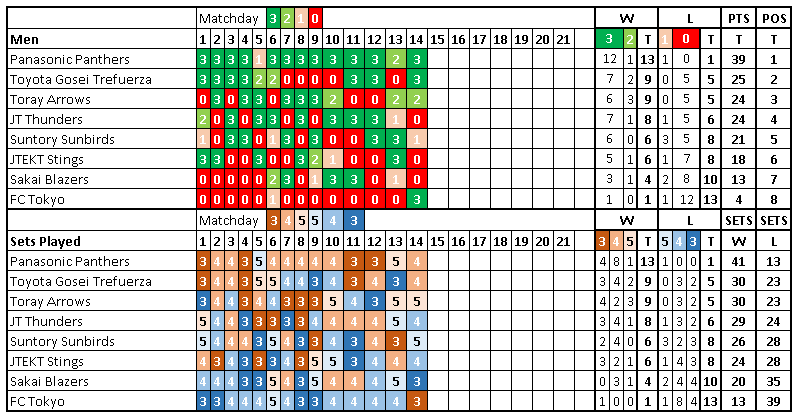