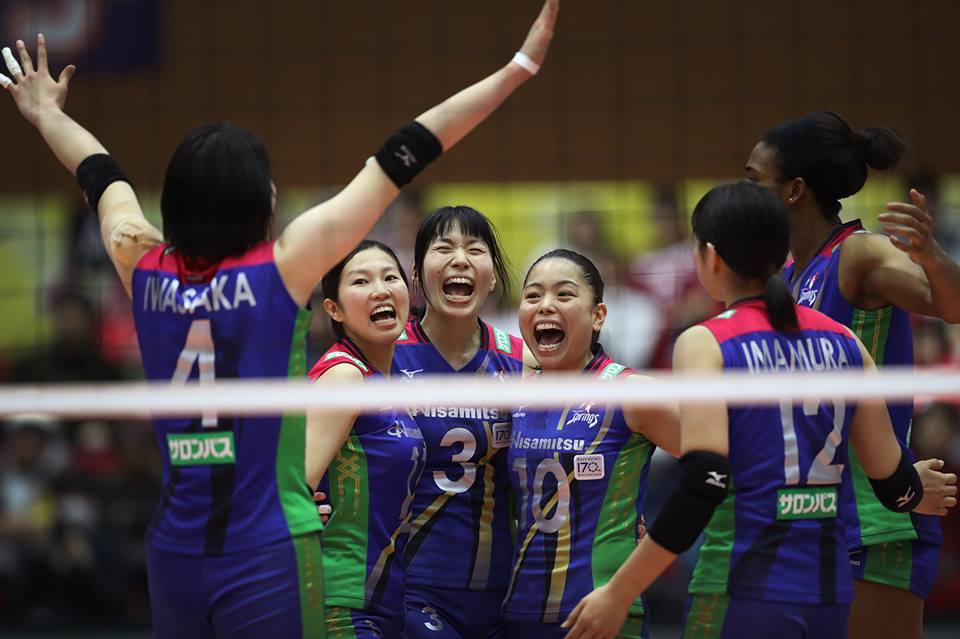 Saturday was the opening day of the Women’s Final 6 in the Japanese V.League and all three matches were played... Current Photo via Japan V.League

Saturday was the opening day of the Women’s Final 6 in the Japanese V.League and all three matches were played in Shimadzu Arena Kyoto.

Regular season champion and undefeated Hisamitsu Springs met the Toyota Auto Body Queenseis in the first match of the day. Both teams split the first two sets, but the Queenseis took the third set to give them a 2-1 sets lead and a potential upset to start the playoffs. The fourth set was close, but Hisamitsu made a late run to win the set and force a fifth set. The fifth set was close until a 4-1 by the Springs gave them a 10-5 lead. Surely, the match was over, but it was not, and Toyota went on a 9-2 run to not only tie, but have two match points at 14-12. Foluke Akinraweo spiked two straight points for Hisamitsu to tie the match at 14-14 and onto extra points. A hitting error gave the Springs match point but Neriman Ozsoy killed to tie the match for the Queenseis at 15. At 16-16, the Springs spiked off the block for their third match point. The Queenseis spiked the ball out of the court for the win by Hisamitsu 18-16 and the match 3-2. Neriman was the leading scorers in the match with 35 points (34k, 1b). Foluke Akinradewo was great in the middle for the Springs with 27 points off of 22 kills, 4 blocks and an ace. Springs teammate Yuka Imamura had 15 (13k, 2b) in the win. Erika Araki had 4 blocks of her 11 points and her teammate Momoka Oda had 16 (15k, 1b) in the loss for the Queenseis. Hisamitsu 22-0 on the season.

JT Marvelous, second place in the regular season met Toray Arrows who were in sixth place in the regular season. Toray jumped out the 1-0 set lead to surprise JT. JT quickly fought back to tied the match at 1 set all. The Marvelous jumped out to a four point lead early in the third set and just keep expanding it to win easily 25-15. Toray got behind early in the fourth and got the score to within one at 24-23, but a spike by Yuka Kanasugi for JT ended the match, 3-1 to JT. Kadie Rolfzen for Toray had 27 points (25k, 1b, 1a) which led all scorers in the loss. She was the only Toray player in double figures. Brankica Mihajlovic was the leading scorer for the Marvelous with 15 (12k, 2b, 1a), but she was very inefficient with her 12 kills taking 46 swings and included 7 hitting errors as well. However, three of her teammates Aika Akutagawa 10 (5k, 4b, 1a), Mai Okumura 11 (7k, 3b, 1a) and Kanasugi with 14 (all kills) helped the team win. JT is now tie on points in the Final 6 with Hisamitsu, but the Springs better result in the regular season give Hisamitsu first place and JT second.

Fourth place in the regular season Denso Airybees faced NEC Red Rockets, fifth place. The Red Rockets looking to turn around their regular season took a 2-0 lead on Denso. The Airybees fought back in the third set and came from behind in the fourth set to force a fifth set. Denso jumped on NEC early and had a 9-5 lead when the Red Rockets used their final timeout. The Airybees kept extending their lead to win the set 15-9 and the match 3-2. Denso won the match by blocking (+4) NEC at the net and serving (+3 aces) the Rockets off the court. Yurie Nabeya of Denso led all scorers with 26 (22k, 3b, 1a). Her teammates Mizuho Ishida 17 (14k, 1b, 2a) and Christiane Furst 15 (11k, 4b) provided support in the win. Misaki Yamauchi led the Red Rockets with 20 points (17k, 2b, 1a). Denso is tied on points with the Queenseis, but the Queenseis had the better regular season and therefore in third place, while Denso is fourth.