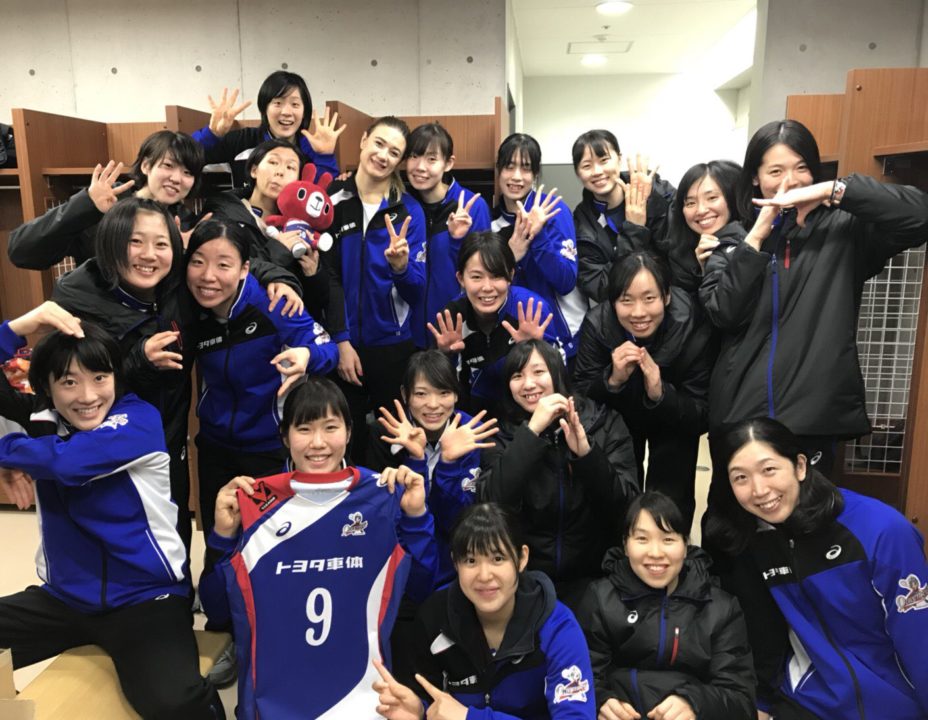 On Saturday, there were three games played in the Japanese Women’s V.League. Toyota Auto Body Queenseis faced the Denso Airybees. Toyota with a win would clinch their berth in the Final 6 playoffs, while a win for Denso would all but give them 3rd place in the regular season and three bonus points for the Final 6 playoffs. The Queenseis dominated the first set 25-15 to take a 1-0 set lead. The second set was much closer, but Toyota scored the final two points of the set to win it 25-22. In the third set, Toyota got out to an early lead and kept it to win the set 25-21 and the match 3-0. Denso may be limping in to the playoffs instead of surging like the Queenseis who have won three-in-a-row. Toyota normally is focused on getting Neriman Ozsoy the ball, but today it was a balanced offense for them. Ozsoy, Saori Takahashi and Momoka Oda all with double digit kills giving a 10 point advantage in spikes. Ozsoy finished with 19 (16k, 2b, 1a), Takahashi 16 (13k, 1b, 2a) and Oda 12 in the win. Denso one had one player reach double figures in kills and that was Mizuho Ishida with 10 and she finished with 12 points (1b, 1a). Yurie Nabeya had a bad day with only 3 kills on 18 attempts for the Airybees. Toyota moved into fourth place with the win and clinched their berth in the Final 6.

Toray Arrows met the NEC Red Rockets. A win by the Arrows would clinch their spot in the Final 6, while NEC were looking to stay ahead of the Ageo Medics. Ageo was even on wins, but NEC is ahead on points with two more matches to play than does Ageo. NEC were absolutely dominant in the first two sets and had a 2-0 set lead. The third set was closer but a late lead was held by NEC to win the set and match 3-0. NEC had great balance on offense with the middles with 5 and 11 kills and the outside hitters at 8, 9 and 11 kills. Haruyo Shimamura and Sarina Koga were tied for the leading scorer in match with 13 points, both 11 kills and 2 blocks. American Kadie Rolfzen was the leading score for Toray with 12 points (11k, 1b), while Kana Ono’s 5 blocks tried their best to keep Toray in the match. NEC faces Ageo on Sunday in a possible playoff deciding match. A win by NEC will clinch their berth in the Final 6 and eliminate Ageo from the playoffs. A NEC loss in three or four sets would possibly put Ageo in front of NEC. Ageo would only have one match left, while NEC would have two matches remaining.

Hitachi Rivale who have been eliminated from the playoffs and second place JT Marvelous met at Wing Arena Kariya. Both teams really had only pride to play for as JT is locked in second place and Hitachi will finish last in the regular season. JT should have won this match easily, but Hitachi took a 2-1 set lead after winning the second and third sets. Hitachi nearly took the match in the fourth, but JT won in extra points 27-25 to force a fifth set. With the match tied at 10-10 in the fifth set, Rivale went on a 5-2 run to end the match and win the set 15-12 and match 3-2. The Marvelous were dominant at the net with +13 points in spiking and +4 in blocking. But the service line is what killed them, 25 service errors or one whole set’s worth of points. Serbian Brankica Mihaljovic for JT had 30 points (28k, 2b) to lead all scorers in the match. Her teammate Aika Akutagawa had 19 points on 14 kills and 5 blocks, but 7 service errors. For Hitachi Miwako Osanai led in scoring with 18 points (17k, 1b), and American Cursty Jackson was a wall with 6 blocks and 11 kills for 17 points.