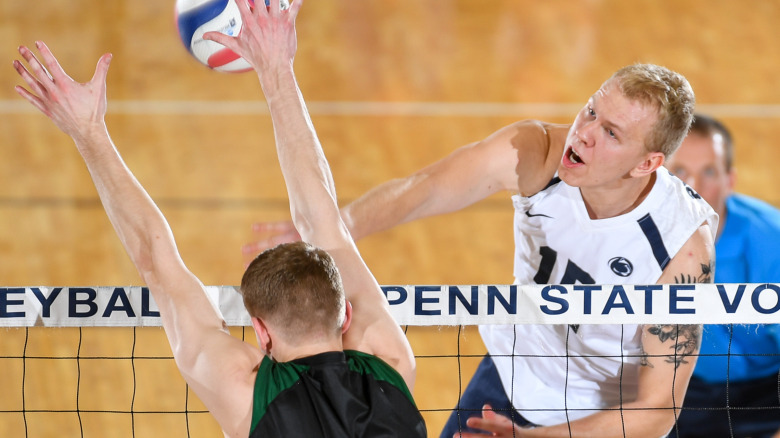 #9 Penn State squeaked out a five-set victory over #14 USC with a pair of late-set comebacks and a balanced attack. Archive Photo via Mark Selders/Penn State Athletics

LOS ANGELES, CALIFORNIA – In the first of two matches on the day in the AVCA Showcase (also the Pac-12/Big Ten Challenge), #9 Penn State won a five-set battle with #14 USC. It was the Nittany Lions’ first ranked win of 2018 and they were pushed to the limit to acquire it. For USC, it’s their fourth consecutive loss.

Both offenses were rolling, as Penn State hit .285 compared to USC’s .297. There was a difference though as the Nittany Lions let it rip more and had more errors, yet countered it with 20 more kills. USC almost made up for it with a 20.5 to nine advantage in blocks, but with everything being so even (both teams scored the same amount of points) in the match it was Penn State finding a way to win.

That theme of finding a way to win was apparent in sets number three and five, as the Nittany Lions fought off seven set points combined in the two sets yet won both.

The opening set saw a back-and-forth affair with 13 ties and a pair of lead changes. That was apparent to a 19-19 tie in the game until Ryan Moss (14 kills, .300, 7 digs, 3 blocks, 2 aces) started a USC spurt with a kill. Following another Trojans’ point, Gianluca Grasso (10 kills, .200, 6 blocks, 5 digs) added to it with an ace, as the three-point cushion was tightened by Penn State, but never tied with the Trojans taking the first 25-23.

The fifth was its own story though, as Aidan Albrecht‘s ace capped a 7-3 run to switch the Nittany Lions in front, 9-7. A 4-0 Trojans’ run that included a pair of Kyle Gear (6 blocks, 1 kill) block assists again changed the advantage to USC at 11-9. That helped them take a match point chance at 14-13, but Grasso’s serve error tied the match. Wyett’s kill gave the Trojans one more chance at the win but Braswell found Penrose to even things at 15 and spark three unanswered that ended with an Albrecht (18 kills, .412, 6 digs, 3 aces) kill.

Penn State now gets about a week off to prepare for another ranked match. This time, if we’re sticking with the Big Ten theme, will be a clash of conference foes with Penn State and Ohio State – although in reality it’s EIVA vs. MIVA. USC also has a tough opponent ahead as they meet Long Beach State on the road a week from today.

Trailing 23-18 late in the third set off a Sam Lewis kill for the Trojans, with the match tied 1-1, Penn State began its climb.

The Nittany Lions used a kill from Aidan Albrecht paired with a kill from Calvin Mende to get to within three of USC, trailing 23-20.

Both teams traded errors, Penn State an attack error, USC a service error to push the score to 24-21 in favor of Southern Cal.

The next two Blue & White points would come through Trojan errors as Ryan Moss and Jack Wyett each committed an attack error to inch the Lions closer to the lead. The errors led to a timeout by USC head coach Jeff Nygaard.

Out of the break, a third-straight Trojan error knotted the set at 24-24 with all the momentum on Penn State’s side.

USC and Penn State traded a few points before the Nittany Lions pieced together two straight to give the Lions the set 28-26 and a lead 2-1 heading into the third off the swings of Jalen Penrose and an attack error by USC’s Gianluca Grasso.

Penn State played USC close in the fifth, never trailing by more than two points at any time in the set. Tied 14-14, Penn State closed out the Trojans with kills from Penrose and Albrecht to cap the match 3-2 and move to 3-1 on the season.

Penn State will hit the road once again as the Nittany Lions head to Columbus, Ohio to face the defending NCAA Champion Buckeyes Jan. 28th at 2 p.m. ET in St. John Arena.

In the tourney’s later match on Saturday, the host No. 2 Bruins meet No. 3 Ohio State.

USC lost its fourth straight match to fall to 3-4, while Penn State improved to 3-1.  The Trojans and Nittany Lions both fell in 4 sets the AVCA Showcase’s first day on Thursday (Jan. 18), USC to Ohio State and Penn State to UCLA.

USC next travels to top-ranked Long Beach State next Saturday (Jan. 27) for a 7 p.m. non-conference match.