In December 2017 the V.LEAGUE had announced for the women’s V1 League (Top Division) that there would be a maximum of 12 teams. As the Forest Leaves Kumamoto ceased operations recently and had been one of the 14 teams with a S1 License which would have put them into the V1 League. There was some stipulation that the next highest ranked S1 team, JA Gifu Rioreina would be promoted to V1. However with today’s announced that there will only be 11 teams in V1, JA Gifu will be playing in the V2 League (second division) in 2018-2019. 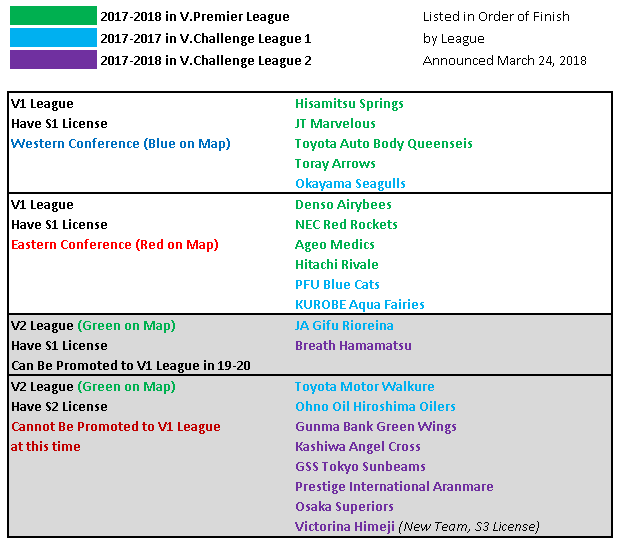 There was a surprise announcement with the naming of Victorina Himeji as the last team of 10 in V2. Victorina Himeji had not been listed in December’s announcement of license levels, but the team must have applied before the deadline. Victorina had tried in the summer of 2017 to acquire Sendai Belle Fille’s spot in the Challenge League 1, but could not sign enough Sendai players in time to be approved for the 2017-2018 season. Victorina Himeji were given an S3 license, which is only given to new teams. However with no other new teams, they have been placed in the V2 League. If there were enough teams to have a third division (V3) then new teams would be placed there. V2 teams will play their opponents two times (18 matches) before the playoffs.

At this time there is no information about promotion or relegation, but teams will need to pass the different license requirements to be promoted.