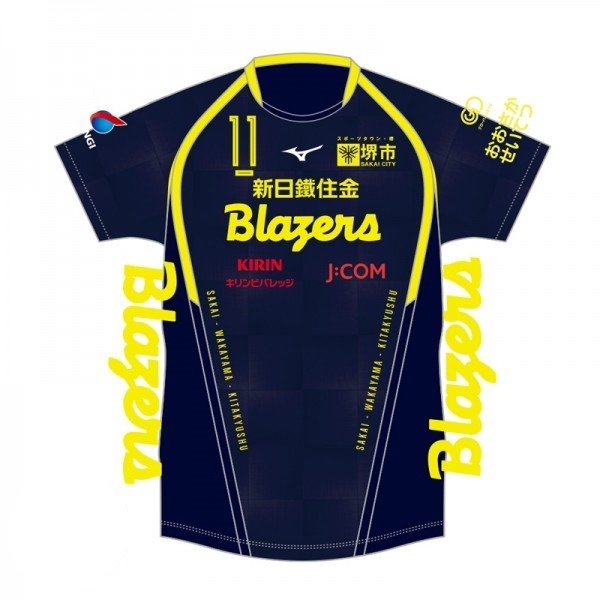 In preparation for the 2017-2018 Men’s V.League season in Japan, the Sakai Blazers released their 2017-2018 uniforms. The Blazers have... Current Photo via Sakai Blazers 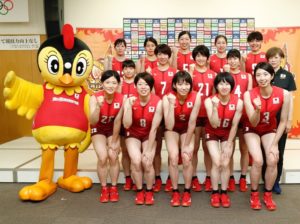 In preparation for the 2017-2018 Men’s V.League season in Japan, the Sakai Blazers released their 2017-2018 uniforms. The Blazers have are reaching their 15th season as a “club” team in the city of Sakai, in the southern part of Osaka Prefecture. However, the team dates back to 1939 when it was created by Japan Steel Corporation and played their games in what is now Kitakyushu, Fukuoka Prefecture. The team moved its operations to Sakai in 1969 and have remained there ever since.

The team plays its home games in a gold jersey, while playing on the road a navy blue jersey. Their shorts match the colors on top, but only the jerseys are sold on the team’s homepage. First we’ll go over the yellow jersey. 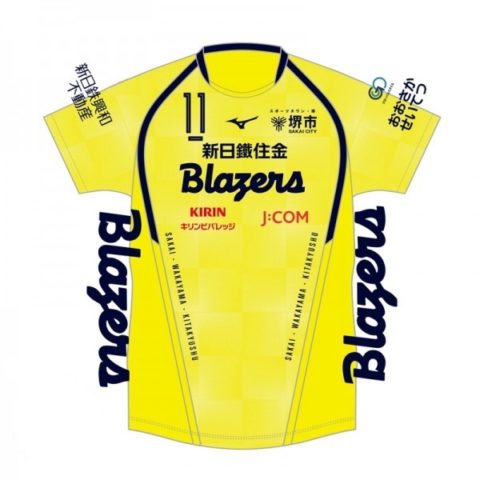 The chest has the Blazers script logo in navy. You can barely see in the picture that the center part of the jersey has gradation boxes of gold. It may appear easier to see in actual light. The collar is two tone with a navy blue outline on the front. Two navy lines extend in an arc from the collar to the bottom of the jersey. Halfway down the solid lines shift to outlines. Next to the outlines is Sakai – Wakayama – Kitakyushu. These are the cities that the Blazers are associated with throughout its history. The uniform number is moved to the left side near the shoulder, and even on this picture you can see the captain’s bar as well. Above the heart on the right side is the symbol for the city of Sakai.

The Blazers script logo is also used on both side panels, one facing downwards and one facing upwards. 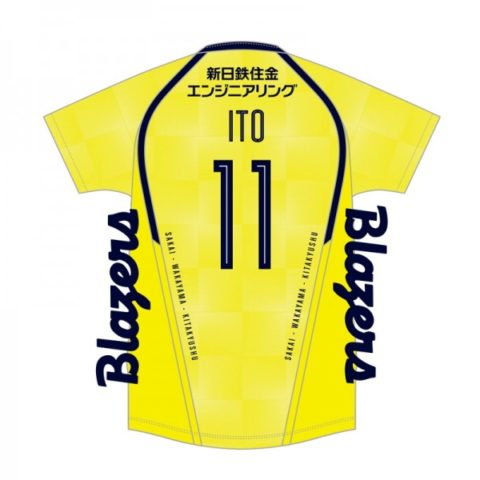 As for the back it looks very similar to the front.

Now switching to the navy blue road jersey. It is basically an exact replica with the color change except for the white Mizuno logo and white outlines and hemline. The gradation box is still barely visible in the picture and I still feel that it will be easier to see in actual light. The back of the jersey also is swapped as well colorwise. 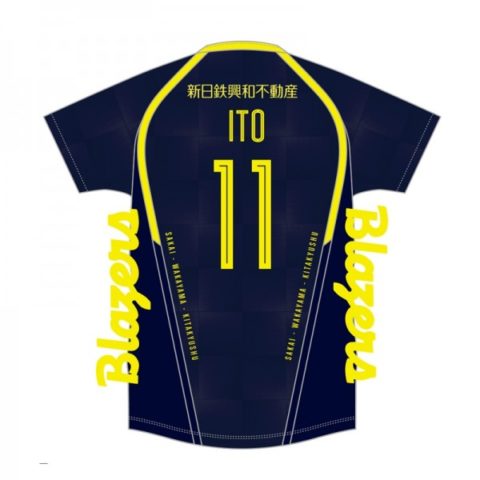 The Blazers color combination always looks good and with it they are looking to get back to the top of the V.League in the 2017-2018 season.