K-State Fights Past Oklahoma On The Road 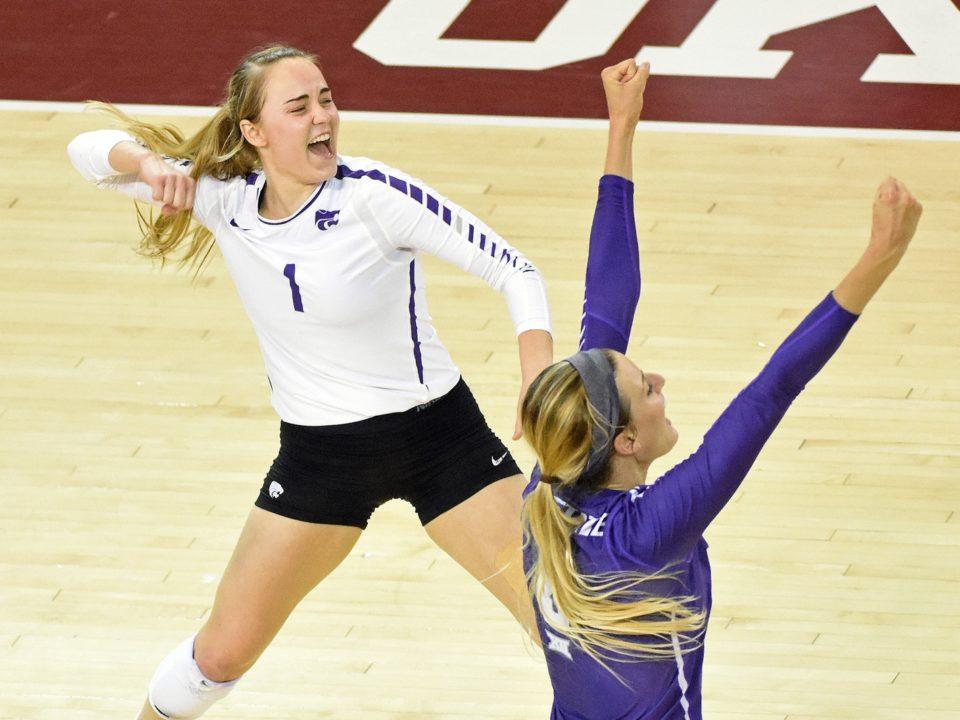 After a slow first set, the K-State Wildcats rallied back to defeat Oklahoma in four sets.

Wildcat Setter Katie Brand recorded a double-double with 52 assists and 10 digs, while Brooke Sassin put down 17 kills and picking up 10 digs for a double-double. Alyssa Schultejans added 15 kills. Libero Kersten Kober picked up a match-best 15 digs.

For the Sooners, Marion Hazelwood put down 16 kills on a .500 hitting percentage and six blocks. Alyssa Enneking added 12 kills and Rachel Manriquez picked up 14 digs. Setter Audrey Alford contributed 52 assists and 10 digs for a double-double.

NORMAN, Okla. – The Kansas State volleyball team fought off four set points in the fourth set and rebounded from an opening-set loss to seal a 13-25, 25-19, 25-21, 28-26 win over Oklahoma Saturday night at McCasland Field House.

“No one panicked,” said senior setter Katie Brand. “We just kept fighting. We knew what we needed to do and just took each point as it came. We got contributions from everyone. Zsofia Gyimes came in and played awesome, maybe her best game of the season. Alyssa Schultejans came up big for us again, too.”

Schultejans, a sophomore outside hitter, set a new season high in kills for the second straight match with 15 against the Sooners while Gyimes, a sophomore middle blocker, recorded a season-best seven kills on 12 swings (.583) and added four blocks.

K-State posted season lows in both points scored (13) and hitting percentage (-.053) in the opening set, finishing with 11 attacking errors compared to just nine kills as a team. The Wildcats fell behind early after Oklahoma was able to rattle off eight consecutive points to take an 11-3 lead. OU hit .323 (14k-4e-31ta) as a team in the frame

“We played about as poorly as we have all season in that first set,” added Brand, who finished with 52 assists and 10 digs. “But we are a veteran team and we’ve been in these situations before. Whether you lose a set by two or by 10, it ultimately doesn’t matter. We made the adjustments we needed and just kept working.”

The Wildcats bounced back in the second set by hitting .556 (17k-2e-27ta), led by senior outside hitter Brooke Sassin with seven kills on nine swings with only one error (.667) in the set. Schultejans added half a dozen kills with no errors on nine attempts (.667).

After two consecutive road matches, Kansas State will return to Ahearn Field House on Saturday, October 22 as it hosts West Virginia. First serve is slated for 6 p.m., and will be broadcast world-wide on K-StateHD.TV. Fans can listen to the match on local radio at 1350 KMAN and at k-statesports.com.

·         K-State has won five of the last six matches against Oklahoma, including three straight.

·         Schultejans’ 15 kills set a new season and conference career high. It is the third time this season and 15th time in her career that she has reached 10 or more kills in a match.

·         This was the ninth match this season in which K-State has reached double digit blocks (8-1 in those matches).

·         The .556 attacking percentage in the second set was the fourth-best the Cats have posted in a single set this season.

·         This marked the fifth time this season that Wildcat teammates have recorded a double-double in the same match.

NORMAN, Okla. – The University of Oklahoma volleyball team had its three-match win streak snapped in a 3-1 loss to Kansas State at McCasland Field House on Saturday night. The Sooners dropped to 12-8 overall and 3-4 in the Big 12, while the Wildcats, who are receiving votes in the AVCA Coaches’ Poll, improved to 15-5 and 4-3.

“It’s momentum swings, that’s what happened,” explained head coach Santiago Restrepo. “We started really high and couldn’t keep up that momentum. I thought, in the fourth set we woke up. The set bounced their way. We’ve just got to play better in crunch time.”

The first set opened with OU taking an early 7-3 advantage that forced a Kansas State timeout. The Wildcats burned two early timeouts and lost a pair of challenges as the Sooners hit .323 and held the Wildcats to -.053 for the set.

The action on the floor went back-and-forth in the third with neither side able to grab hold of the momentum. Leading 22-21, Kansas State got back-to-back service aces off the net from Alyssa Schultejans to gain set-point.

K-State’s Brooke Sassin led all players with 17 kills and added 10 digs for the double-double. Schultejans and Bryna Vogel joined Sassin in double figures with 15 and 10, respectively. Setter Katie Brand dished out 52 asssists, while Kersten Kiber picked up 15 digs.

Oklahoma returns to action next Saturday, October 22 with a match at Baylor.