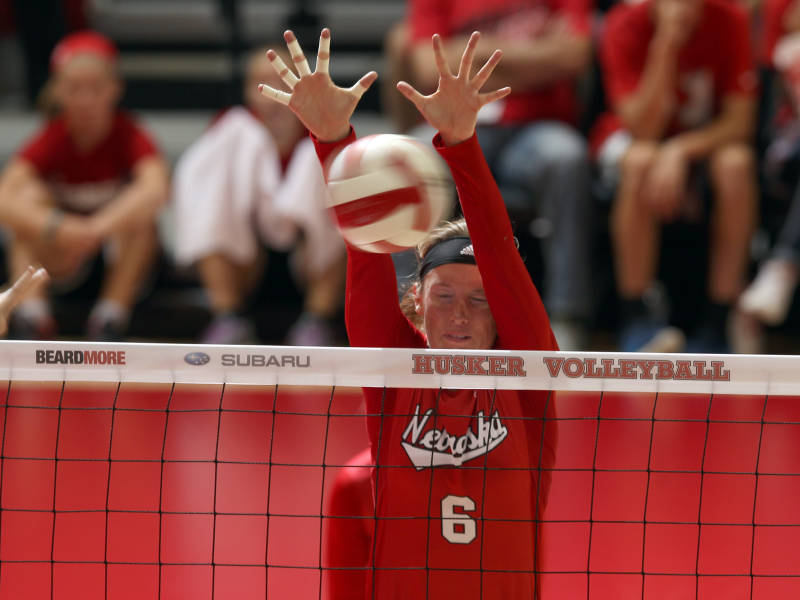 Kadie Rolfzen (above) was named the Invite MVP as Nebraska swept their home Invite over the weekend (Photo Courtesy: Stephanie Carpenter/Nebraska Athletics)

LINCOLN, Neb. — Surrounded by a sea of red shirts, the Huskers hosted the Nebraska Invite at the Bob Devaney Sports Center this past weekend.

Opening the Invite, the Oregon State Beavers dominated the Syracuse Orange in a quick three set match, 25-10, 25-19 and 25-20. The Beavers hit .275 for the match compared to .088 for the Orange. The Beavers also lead over the Orange in aces 8-3 and assists 35-23. Syracuse did out-dig the Beavers, 43-39, largely in part to Oregon State’s 102 attacks versus Syracuse’s 91. During the match, Oregon State junior Mary-Kate Marshall, became the 15th player in Beaver history to reach the 1,000 kill milestone.

To finish off a perfect weekend, the Huskers swept Oregon State 25-16, 25-14, 25-12 Saturday. Five Huskers had six or more kills, including eight kills and five blocks from senior Amber Rolfzen. Nebraska hit for .378, their fourth straight match hitting above .300. The Beavers were held to a .054 hitting percentage. Mary-Kate Marshall led Oregon State with 11 kills. The Huskers led 9-4 in blocks and 43-29 in digs.

In the final match of the Invite, Iowa State finished off Syracuse in three sets 25-14, 25-15 and 25-21. Cyclone sophomore, Jess Schaben, lead both teams with 19 kills and a .372 hitting percentage. Iowa State posted a .257 hitting percentage while Syracuse hit for only .031. The Orange did outshine the Cyclones in blocks at 9-7.