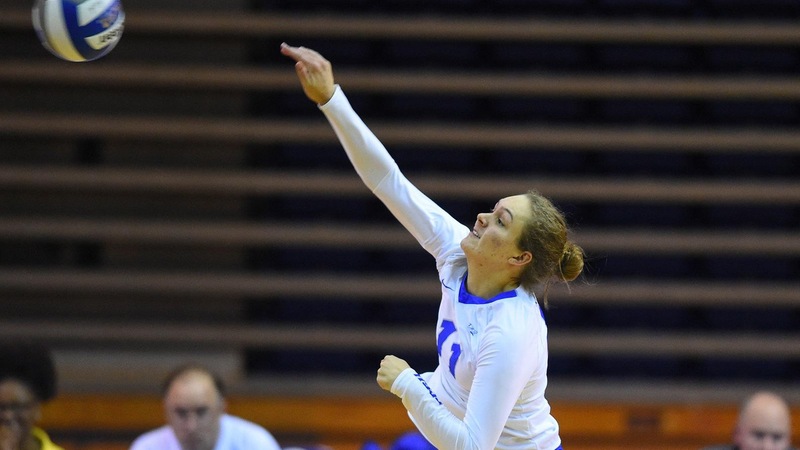 Junior Madelyn Kaprelyan posted a triple-double to lead the Central Connecticut volleyball team to a 3-1 win at Iona on Wednesday night. CCSU won by scores of 25-21, 16-25, 25-22, 25-19. Senior Raquel Quirarte chipped in with her second straight double-double for the Blue Devils.

With the win, Central improved to 3-8 on the season, while the Gaels slip to 2-4 overall.

CCSU will return to action on Friday, Sept. 21, when it opens Northeast Conference play against Robert Morris.

Kaprelyan turned in 16 kills, 16 assists and 12 digs for the Blue Devils. She added three blocks. Quirarte had 12 kills and 14 digs. She added four blocks and two service aces.

Central took the first game, breaking a 17-17 tie with three unanswered points. Henderson opened the spurt with a kill and then added an ace to make it 20-17. The Blue Devils would lead the rest of the game and close it out with a kill from Henderson.

Iona bounced back in the second game to even the match. The Gaels would stretch a one-point margin to 12-6 and take control of the game. Iona would stretch the lead to as much as 10 points.

CCSU broke a 7-7 tie in the third game with a 4-1 run to build an early lead. The Gaels would scratch back and even the set at 21-21. Kaprelyan would help Central close out the game, recording a kill and a block to seal the game.

Central  got back-to-back kills from Henderson and Quiarte midway through game four in taking a 14-11 lead. The Blue Devils would lead the rest of the way and push the lead to as much as 23-16 following three straight errors by Iona. Kaprelyan would record the night’s final kill to win the match for CCSU.