Pullman, Washington – #2 Stanford bounced back from their first Pac-12 loss of the season to down Washington State on the road in four sets. Besides getting things back on the right track with every match important to earning a top four seed, the Cardinal inch one win closer to a Pac-12 title.

While many others posted big numbers, none stood above Stanford’s Kathryn Plummer (22 kills, .220, 13 digs) and Washington State’s Taylor Mims (25 kills, 14 digs, four blocks). Only one came out with the win though, as Plummer got more help around her with the rest of her teammates logging 40 kills compared to 28 from the ‘others’ for the Cougars.

Establishing those other options has been an issue at times this year for Washington State, and Stanford was able to continue that trend by holding the Cougars to a .169 mark while they hit .222. That was enough to overcome being slightly out-blocked (13-11, WSU) and struggling for yet another match in serving as they totaled 13 serve errors to three aces. They will hope that doesn’t become a developing trend as for their trip to the state of Washington, they recorded eight aces to 27 serve errors in two matches.

It wasn’t looking like a bounce-back performance early, as Washington State came ready to play in the opening set, needing only one lead change in the first five points to go ahead and never look back.

It wasn’t quite that simple in the second though as Washington State clung to a small lead until Stanford went in front 20-18 on a 3-0 run. After the Cardinal pulled ahead 23-20, the Cougars hit a 5-1 spurt with a Jocelyn Urias (seven kills, five blocks) kill to earn a set point chance. Back-to-back Audriana Fitzmorris (13 kills, .423, seven blocks) kills switched that opportunity though before Washington State would garner the advantage back at 28-27. After Fitzmorris thwarted that attempt yet again, Ella Lajos (eight kills, .316, six blocks) had kills to make it 29-28 and 30-29. With the Cougars unable to close though, a 3-0 Cardinal run finished off the set at 32-30.

Things weren’t as nerve racking in the third, as Fitzmorris continued her strong match with the first point for Stanford. From there, the Cardinal were ahead from coast-to-coast in the set to develop the 2-1 set advantage. After that, the fourth started tight but would slowly balloon out to bigger and bigger Stanford leads. The largest came at 20-15 and ended within just a point of that as Plummer laid down the final point at 25-21.

With the week now completed, Stanford will have some time as they prepare for two home matches with the Los Angeles schools in the upcoming week. It’s opposite for Washington State, who goes on the road next week to take on Oregon and Oregon State.

McClure finished with career-highs in kills (13) and digs (17) to notch her second double-double of the season. Plummer added 13 digs to her 22 kills for her team-best eighth double-double.

The Cardinal evened the match in a wild second set, where Stanford came out on top 32-30. Fitzmorris led the team with six kills in the set, while Plummer and McClure had four apiece. 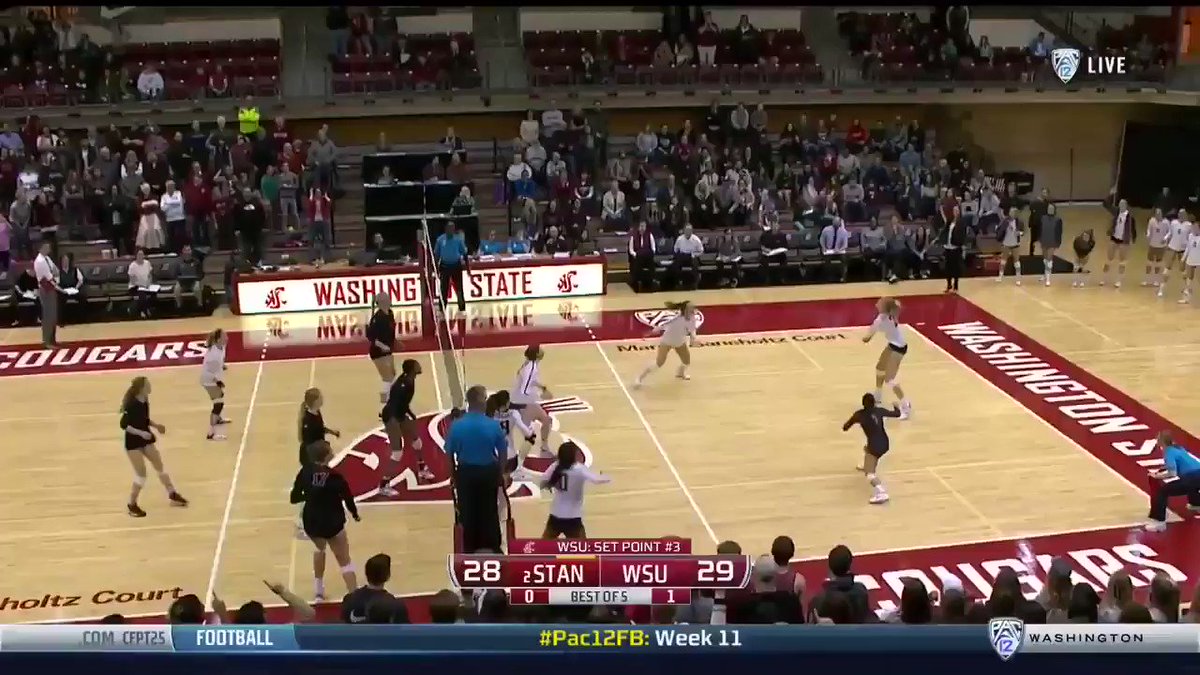 Public service announcement, this is how you bounce a ball

Stanford’s block came alive in the third as the Cardinal took a 2-1 lead in the match with a 25-16 decision. Stanford denied the Cougar attack on five occasions, including three by Fitzmorris. The Cardinal hit .206 in the set and held Washington State to a .054 clip.

Freshman Sidney Wilson came off the bench to serve and put down two aces. As a team, Stanford hit .222 and finished with 79 digs and 11.0 blocks.

Washington State junior Taylor Mims had a career-high 25 kills and 14 digs to lead the Cougars.

Stanford returns to The Farm next week to play host to No. 17 USC on Wednesday and No. 18 UCLA on Thursday. Both matches will be televised on Pac-12 Networks.