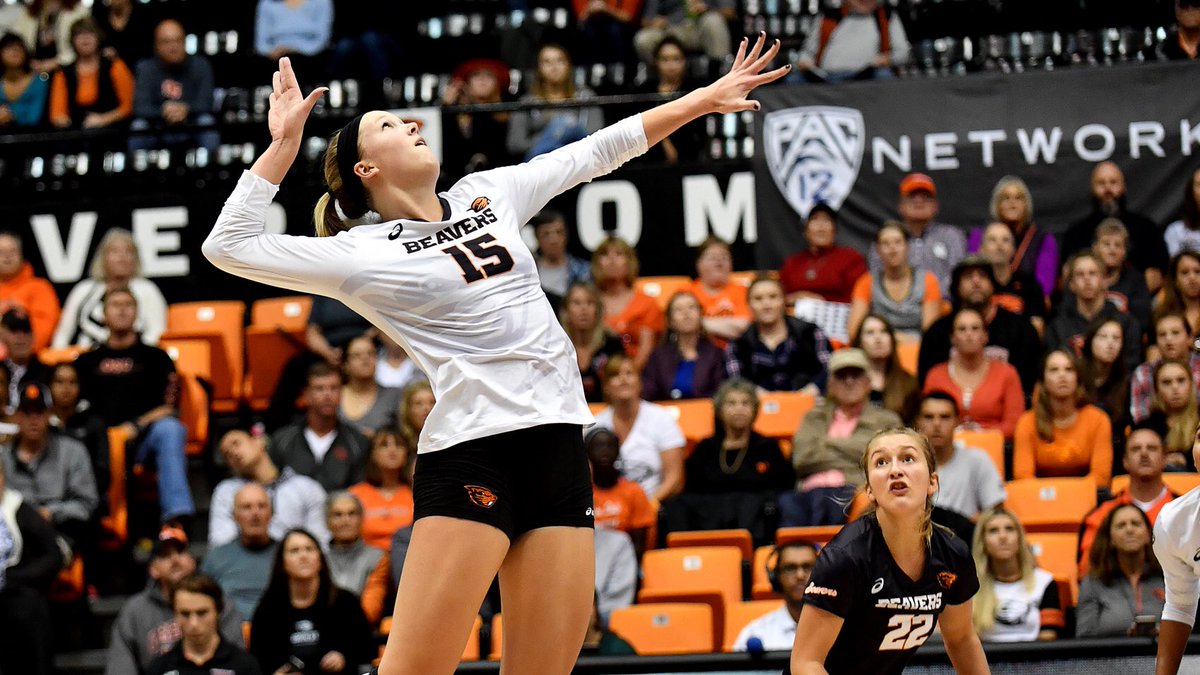 Oregon State senior outside hitter Mary-Kate Marshall registered a team-leading 21 kills, but it was her defensive prowess that moved her into the national spotlight as a member of the elite 1,000 kill/1,000 dig club.  Current Photo via Oregon State Athletics

TEMPE, Ariz. – Oregon State senior outside hitter Mary-Kate Marshall registered a team-leading 21 kills, but it was her defensive prowess that moved her into the national spotlight as a member of the elite 1,000 kill/1,000 dig club.

Marshall needed just two digs entering the night to join the elite group, which currently features 28 current players. All told, she has posted 1,830 kills and 1,007 digs.

The Beavers needed all 21 of Marshall’s kills and four blocks to outlast the Sun Devils, while notched two more putaways and just four less points in the match. OSU bested ASU .225 to .202 in hitting, 4-3 in aces and 14-9 in blocks.

The fifth set was never in doubt for the Beavers, which surged to a 9-3 lead to start the stanza. Three blocks and a kill by Bennett paced Oregon State, while Bruin also chipped in two kills and was in on two stuffs. Arizona State scored four of the next seven to pull within four at 12-8 as Unzue notched two solo blocks and Okara downed two kills. Kills by Marshall and Bruin put OSU on the hill for the match at 14-8, but the Sun Devils thrwarted three attempts, two on Beaver miscues, to stay alive. Finally, a McLaughlin putaway ended the night.

On the play of the 2nd set, @mkmarshall1 recorded her 1,000th career dig. She just the sixth player in OSU history with 1,000 kills and 1,000 digs in her career! #GoBeavs pic.twitter.com/lVkmGw6vBl

The Oregon State volleyball team, one of the hottest teams in the Pac-12 Conference, defeated knocked off Arizona State in an intense five-set match Saturday night. The Beavers’ win over the Sun Devils completed OSU’s first road sweep in the desert since 1993 and marks the first time OSU has gone 4-0 against the Arizona schools in a season since 1990.

“I was very concerned about this match-up,” head coach Mark Barnard said. “They are a scrappy team and they’ve been playing well plus they had the emotion of senior night. That was a gutsy win for us. We didn’t play our best tonight and still came away with the win.”

Senior Mary-Kate Marshall, who has led the Beavers in kills in 25 out of 28 matches in 2017, once again led the squad with 21 kills. Maddie Goings added 17 kills and Kory Cheshire posted nine. Grace Massey tallied a team-leading 18 digs while Serena Bruin came off the bench to post a season-high seven blocks to go with a season-best seven kills.

Arizona State, which held senior night festivities prior to the match, came out on fire in the first set. The Sun Devils ran a highly efficient offense in the opening set terminating at a .353 attack percentage to take the set 25-19.

The Beavers settled in for the second set making the Sun Devils work harder. The squads kept the score close with OSU ahead throughout until the Beavers were finally able to use a 3-0 run to open the lead to 17-12. Goings heated up in the second period recording six kills and the Beavers won the set 25-17 to make the match even at intermission.

ASU returned from the break and quickly got to work taking a 14-5 lead. Still trailing 17-10, the Beavers began a comeback behind Kylee McLaughlin’s serving. OSU went on a 6-0 run that included four blocks including three by Bruin to close the gap to 17-15. After a string of sideouts, the Beavers again pressed forward with Goings recording back-to-back kills to tie the score at 20-20. The score remained tied at 24 until ASU scored the final two points to steal the set 26-24.

Once again trailing early in the set, the Beavers had to fight back from a 10-6 deficit to stay alive in the match. Four kills by Marshall sandwiched around a Bruin kill brought the Orange and Black back to tie it up at 13-13. OSU took a lead for the final time at 19-18 on a kill by Haylie Bennett and the Beavers didn’t look back from there winning the set 25-19 and sending the match to a fifth set.

“Winning the fourth set was vital, obviously, but I knew then that we could pull out the win,” Barnard said. “I knew that if we could come back and get that set that we would have the momentum to pull through.”

Oregon State took command of the final set from the outset. Bennett recorded her first of three blocks in the short set to give the Beavers a 3-2 lead and Bruin followed with back-to-back kills. OSU used a 5-0 burst to take a 10-4 lead. The Sun Devils continued to force the Beavers to earn every point, but four kills in the set by Bruin helped OSU to advance the lead to 14-8. ASU fought off three match points before McLaughlin went on the attack to record the final kill to give OSU the set, 15-11.

Game Notes: With road wins at Tucson and Tempe this weekend, it is the first road sweep for the Beavers in the state of Arizona since 1993 … Oregon State won all four matches with the Arizona schools this year for the first time since 1990 … Mary-Kate Marshall finished with a team-leading 21 kills. She has now led the Beavers in kills in 25 out of 28 matches … four OSU players accumulated double-digit digs – Grace Massey (18), Kylee McLaughlin (14), Kayla Ellis (14) and Maddie Goings (11) … two Beavers posted double-doubles –Goings (17 kills, 11 digs) and McLaughlin (47 assists, 14 digs) … Marshall recorded the 1,000th dig of her career on Saturday night. She is the sixth player in OSU history to record 1,000 kills and 1,000 digs in her career.

Next Up: Oregon State has completed its road slate for the year. The Beavers are back at Gill Coliseum this week to face Washington on Friday, Nov. 17, and they meet Washington State on Sunday, Nov. 19.

The Sun Devils honored and celebrated the careers of three seniors, Halle Harker, Oluoma Okaro and Isabel Miller with a pregame video and ceremony.

“It was a night with mixed feelings, with the senior girls playing their hearts out” Coach Moreno said. “That was pretty cool to see that. Maybe for the first time, we really battled.”

In fitting fashion on senior night, Oluoma Okaro put together an outstanding last performance at Wells Fargo leading the Sun Devils with 26 kills. Okaro was on fire, attacking at a .351 clip while adding 16 digs for her 10 double-double of the season.

Okaro was assisted offensively by Greire Hughes and Ivana Jeremic who both eclipsed the double-digit kill mark with 17 and 10 respectively. Both Jeremic (13) and Hughes (10) added career-highs in digs, collecting their fifth and first double-doubles of the season, respectively. Hughes obliterated her previous career-high of six digs.

The Beavers were led by Mary-Kate Marshall who tallied 21 kills and Maddie Goings who added 17 kills. Kylee McLaughlin recorded 47 assists.

Up next, the Sun Devils hit the road next week to face No. 12 Utah on Friday at 7:00 MST live on Pac-12 Networks. Arizona State will then travel to Boulder to take on the Colorado Buffaloes on Saturday 7:00 MST.