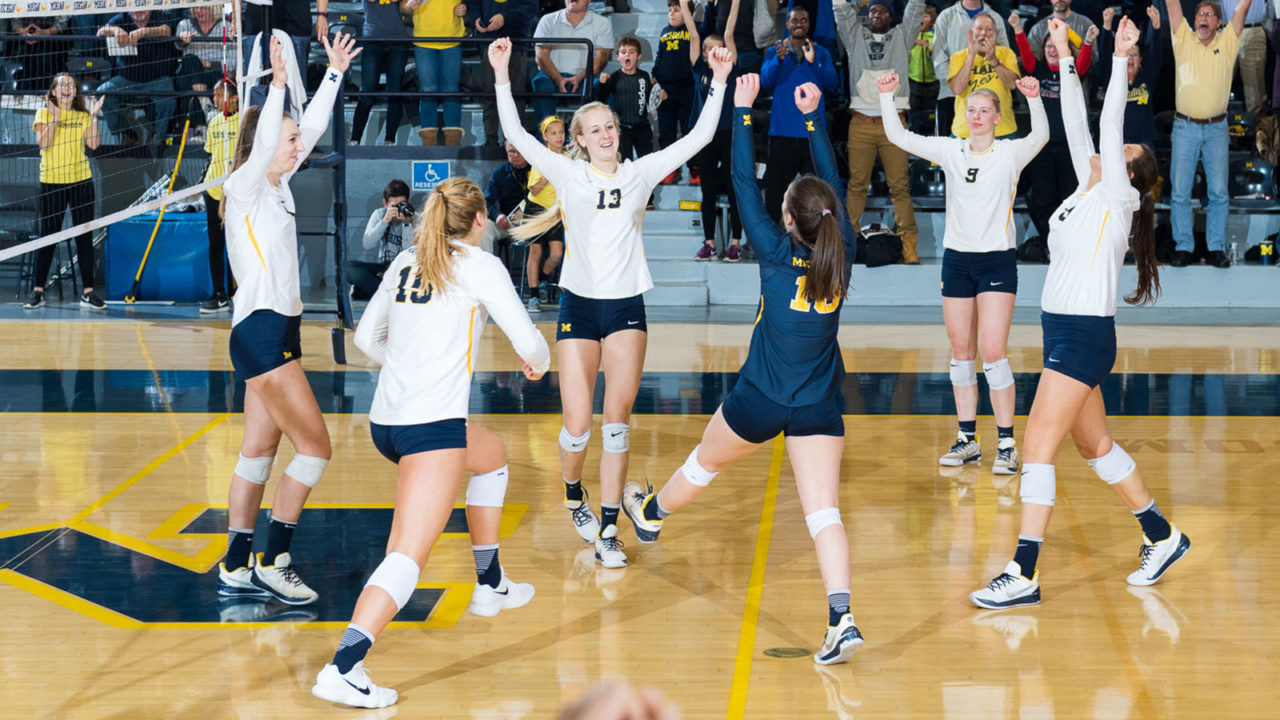 The third time was the charm for the Michigan volleyball team, as the Wolverines held on for a five-set win over Illinois, in their third straight five-set affair.  Current Photo via Michigan Athletics

ANN ARBOR, Mich. – The third time was the charm for the Michigan volleyball team, as the Wolverines held on for a five-set win over Illinois, in their third straight five-set affair.

The victory leveled the season series with the Fighting Illini, which won a Nov. 4 five setter in Champaign, Illinois.

The Wolverines won the match despite being outhit .311 to .263 and being outblocked 16-10 and outscored overall 88-83. Both teams managed 68 kills and Michigan boasted a 5-4 edge in aces.

The decisive fifth set saw the teams split the first 26 points, tying at every point 1-13, before a Mahlke kill and Lerg ace capped the 15-13 Wolverine win and the match. Five Illini miscues and kills by five different players contributed to the Michigan effort. For Illinois points came on two kills a a block by Cooney, three Quade kills and four Wolverine errors.

Four double-figure kill performances propelled the University of Michigan volleyball team to its first five-set victory of the season Saturday evening (Nov. 11), as the Wolverines defeated the Fighting Illini by a 3-2 score (25-20, 22-25, 25-23, 15-25, 15-13) inside Cliff Keen Arena.

The five-set match is Michigan’s third straight and the first to result in a victory. The win also marks the Wolverines’ second win over a team recognized in the AVCA poll, as Illinois is currently the third team out of the Top 25 with 16 points.

Michigan had four players total double-digit kills for the first time since a 3-1 victory over Ohio State (Sept. 29) earlier this season. Junior outside hitter Carly Skjodt led the effort with 18 kills, while senior middle blocker Claire Kieffer-Wright totaled 15 at a .310 clip, and senior opposite hitter Katherine Mahlke added 13 behind a team-high .348 attack average.

Defensively, Michigan totaled 10 blocks, and Kieffer-Wright led the charge with six. From the back row, junior libero Jenna Lerg registered 17 digs to mark her 22nd double-digit dig performance this season.

Both teams worked efficiently in the fifth set, as the Wolverines posted a .385 attack average and the Illini hit at a .375 clip. The set featured 13 ties and four lead changes, and neither team could gain more than a two-point lead until a kill by Mahlke and a service ace by Lerg propelled Michigan to the 15-13 fifth-set victory.

Back-to-back kills from Welsh and Skjodt jump-started the first set, and the Wolverines then used a 7-3 run to go up by six and force an Illinois timeout. The Illini inched back to cut the deficit to two at 13-11, but Michigan maintained a lead and used a .355 attacking percentage along with five kills from Skjodt to take set one, 25-20.

Illinois jumped out to an early lead in the second set, but the Wolverines rallied to tie the score at 7-7 on a kill from Mahlke before taking a lead at 9-7 and forcing an Illinois timeout. The Illini then rallied to tie the score once more at 15-15, but a kill by Mahlke and back-to-back Illinois attack errors put the Wolverines up by three. Despite a 21-20 Wolverine lead late in the set, the Illini used a 6-1 run to come from behind and earn a 25-22 second-set victory.

The third set mirrored the second, as neither team could gain a significant lead and keep the momentum. With the teams playing nearly point for point, the score was tied late at 23-23 before a kill from Wetterstrom and a double-block by Mahlke and Kieffer-Wright clinched the third set, 25-23.

Illinois took an early lead in the fourth set of the evening, but back-to-back kills from Skjodt and a service ace by Welsh tied things up, 6-6. From there, however, the Illini launched a 10-3 run that burned both of the Wolverines’ timeouts and put Illinois up, 16-9. Using a .447 attacking percentage and holding Michigan to just a .158 clip, the Illini claimed a 25-15 fourth-set win.

Michigan will get back in action on Wednesday night (Nov. 15) when the Wolverines host in-state rival Michigan State in a midweek Big Ten matchup. The contest is slated for a 7 p.m. first serve inside Cliff Keen Arena, and fans can watch the match streamed live on BTN Plus (subscription required).

Sophomore Jacqueline Quade led all players with just her second 20-kill career match and totaled 21 kills on a .529 hitting percentage to pace the Illini (18-9, 9-7), while junior Jordyn Poulter registered her 19th career double-double and ninth of the season with a career-high 11 kills on a .529 hitting percentage, 52 assists, five digs and three blocks. Freshman Megan Cooney joined the duo in double figures with 10 kills and six blocks against the Wolverines (17-11, 7-9).

As a team, the Illini totaled 16 blocks to Michigan’s 10, with Marysville, Michigan native Ali Bastianelli posting her seventh career double-digit block outing with a season-high 10 stuffs on the night.

Trailing 2-1 in the match, the Illini dominated the fourth set to force a fifth and final stanza. In a back-and-forth set that saw 13 ties, neither team had more than a point advantage until the Wolverines broke a 13-13 tie with a Katherine Mahlke kill, followed by a service ace for the 15-13 set win and 3-2 match victory.

The Wolverines jumped out to a quick 10-3 edge in the opening set, but the Illini fought back with four-straight points, including back-to-back Poulter and Bastianelli blocks to cut the lead to 13-11. Back-to-back UM points slowed the Illini rally, before a block from the home team pushed the score to 20-15. UI used a 4-1 run to close with 21-19 on a Bastianelli and Quade stuff, but the Wolverines returned the favor and finished off the first with a 4-1 run of their own for the 25-20 win.

It was the Illini with the hot start in the second as a Bastianelli kill made it 6-3 in favor of the visitors, but a 7-1 run from the Wolverines pushed the home team ahead at 10-7. After back-to-back kills gave UM a 12-8 edge, the Illini cut the advantage to one at 13-12 with two-straight Quade kills, before a Donnelly service ace knotted things at 15-15. UM answered back with three-straight points to go ahead at 18-15, but a 9-3 Illini run propelled the visitors to a 24-21 advantage, before a Quade kill gave the Illini the set at 25-22 and tied the match at 1-1.

In a tightly contested third set it was the Wolverines that held an early 11-8 edge, but the Illini came back as freshman Kylie Kuyava-Deberg came off the bench to tie the set at 15-15 with her second kill of the night. After UM pushed its edge back to 19-16, an ace from freshman Tyanna Omazic tied the score at 19-19 as the two teams sided out over the next several points. With the score knotted at 23-23, the Wolverines took the set and the 2-1 lead in the match with back-to-back points.

It was all Illini in the fourth with an early 5-2 lead, before the Wolverines came back to tie things at 6-6. A Prince kill gave the edge back to the Illini, which the visitors would not relinquish as an 11-3 run pushed the advantage to 20-10. UM cut the edge to 21-14 with a 4-1 run, but the Illini then scored four of the final five points for the 25-15 set victory to force a decisive fifth set.

The Illini return to Champaign for their final three-match homestand in Huff Hall this season, starting next weekend as the Orange and Blue host No. 10 Wisconsin on Friday (November 17) and No. 5 Minnesota on Saturday (November 18). First serve for both matches is set for 7 p.m. CT.