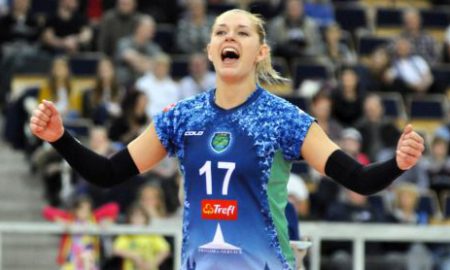 POLI Budowlani Torun has become the new home for Kinga Hatala after Trefl Proxima Krakow emphasized a needed change for their team this season. Current Photo via Michal Szymanski

POLI Budowlani Torun has become the new home for Kinga Hatala after Trefl Proxima Krakow emphasized a needed change for their team this season. Hatala’s former team had been struggling this season in the Polish Women’s League, with a 4-8 record and sitting in 9th place overall.

Replacing Hatala is Rebecca Pavan, who spent the first half of the season unsigned with a club. Below is what Trefl Proxima Krakow’s president had to say about the change:

We needed reinforcement in the attacking position. We talked with Kinga and our coach, and decided that a change was necessary. We would like to thank Kinga for playing in our colors. Pavan is a well-known player, having already played in Poland. Her signing significantly strengthens our team.

POLI Budowlani Torun has struggled this season, much like Hatala’s former squad, posting a 4-8 record but sitting in 12th place overall. Hatala could help spark something for Torun in the second half of the season and bring them closer to playoff contention, but this will be a difficult task.

Hatala has played for Torun’s head coach, Miroslaw Zawieracz, previously when she played for Impel Wroclaw last season. With this, Zawieracz knows the potential that Hatala could bring to his struggling team.