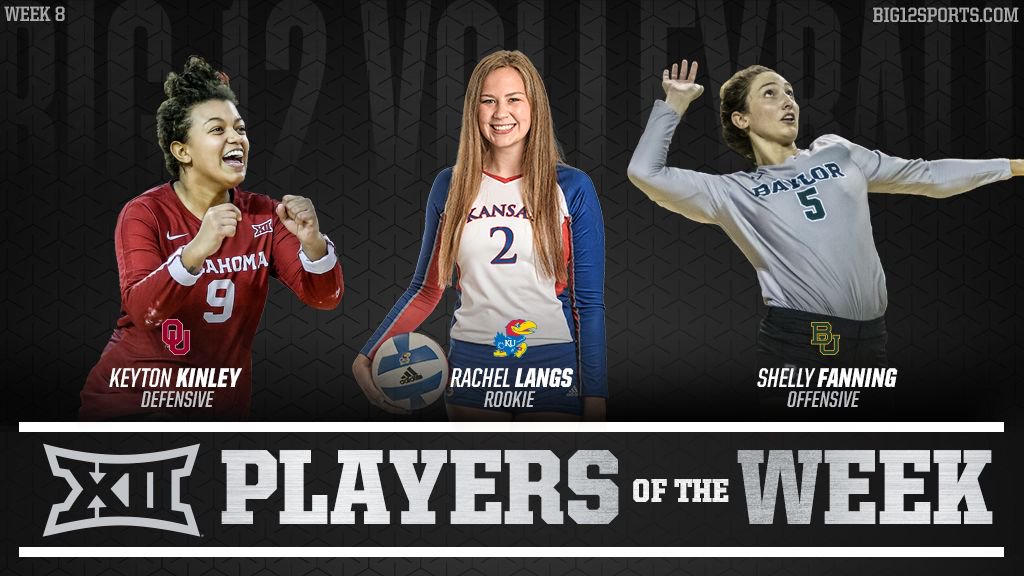 Weekly award winners for the fourth week of conference play were selected as familiar faces and a first time recipient earned the call.

Fanning, Offensive Player of the Week, ranked in the top-two in the league in kills per set (4.22), hitting percentage (.571) and points per set (4.83). The native of Cypress, Texas recorded only two errors last week and posted the best hitting percentage in the Big 12 this season to cap off a five-set victory over WVU with .741 hitting clip from 20 kills on 27 attempts with no errors.

Congrats to the #Big12VB Offensive Player of the Week, Shelly Fanning! #SicEm

A league-leading 51 total digs and 5.67 digs per set last week saw Kinley earn Defensive Player of the Week. The sophomore currently leads the league in conference play in digs (157) and digs per set (5.61) and tallied a career-high 29 digs against then-No. 4 Texas, the most digs recorded in any conference match this season.

✅ Lead the league in digs (51) and digs per set (5.67)
✅ Earn a career-high 29 digs against a top-five opponent
✅ Receive a conference weekly honor @keyton_kinley4 has been named the Big 12 Defensive Player of the Week!
📝: https://t.co/OmSefOPJY6 pic.twitter.com/DxNlJl6a8e

Langs, Rookie of the Week, averaged a league-best in blocks per set (2.14) over the last week, comprised of six total against then-No. 4 Texas and nine total at Texas Tech. The two-time Rookie of the Week honoree led the defensive front for KU in both victories, including a four-set win over the Longhorns. She now leads the Conference in blocks per set overall (1.52) and in league play (1.84).

#KUvball has had a #Big12VB Player of the Week in each of the last four weeks! https://t.co/OmMQhrcZL7

This week’s awards mark the fourth all-time for Fanning, second for Langs and first for Kinley.