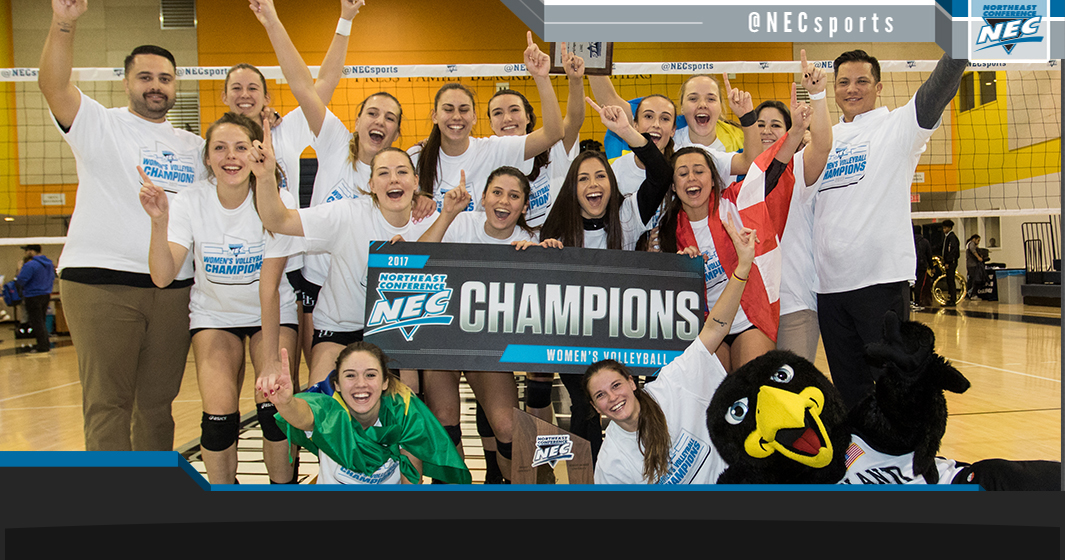 It wasn't easy, but the LIU Brooklyn volleyball team is once again the top team in the Northeast Conference.  Current Photo via LIU Brooklyn Athletics

It wasn’t easy, but the LIU Brooklyn volleyball team is once again the top team in the Northeast Conference.

Freshman Piper Matsumoto recorded what is believed to the first triple-double in NEC Championship history, putting together a season-high stat line of 55 assists, 15 digs and 10 digs. The triple-double is also the ninth in LIU history and first since Dunja Milin against UC Santa Barbara (57 assists, 10 kills, 10 digs) on August 25, 2007. Sophomore Filippa Hansson had a career-best 19 kills, junior Viktoria Fink registered a double-double of 15 kills and 18 digs, and redshirt sophomore Julia Azevedo added 14 kills.

On the defensive end, three other Blackbirds outside of Fink and Matsumoto had ten or more digs: sophomore Natalia Rivera (match-high 38), sophomore Emily Magee (season-high 15), and junior Nina Petranovic (14).

LIU came out strong in the first set, using a pair of kills and a service ace to jump out to a 3-0 lead. CCSU scored three straight points of their own for the first tie of the game and eight points later, the teams found themselves knotted again at 7-7. Five of the next six rallies went in favor of LIU to give them their largest lead at 12-8. The host’s lead would extend to seven (20-13) with a 8-5 surge that saw half of the points come via kill. The Blue Devils would close the gap to three points (22-19) but their attempted comeback would fall short.

The beginning of the second set saw a reversal of fortune, with CCSU taking a 3-1 lead. The Blackbirds pushed back with a 5-0 stretch that included two forced errors, two assisted blocks and a kill for Viktoria Fink. A 4-4 clip got the Blackbirds into double figures first at 10-7 and a quick attack from Matsumoto gave LIU a five-point cushion (12-7). A block by Azevedo and Hansson three points later gave the Blackbirds a 14-8 lead. LIU would match this six-point buffer three more times before moving ahead by seven (22-15) on a block by Krepper and Azevedo. CCSU attempted another late rally and this time was successful, using an 11-2 outburst to steal the set and tie the match.

Set three opened with a 2-2 stalemate after four CCSU attacks – two errant ones and two successful ones. The teams’ inability to separate from each other continued for the next eight points, with ties at 3-3, 4-4. 5-5, and 6-6. LIU earned a bit of breathing room with a Fink kill and Blue Devil attack error (8-6) but CCSU scored the next three to take its first lead of the set, 9-8. The Blue Devils would eventually build and maintain a two-point lead until a 6-0 LIU run – powered by five Blackbird kills – moved the Blackbirds from a 16-14 deficit to a 20-16 advantage. LIU made the score 22-19 on a good swing from Petranovic but CCSU scored five straight to make the score 24-22. A tip over by Hansson ended the Blue Devil surge and another CCSU error tied the set at 24-24. Another missed attack by CCSU and a quick kill from Matsumoto moved the Blackbirds one set away from the championship.

After a CCSU kill opened the fourth set, LIU either led or saw the score tied through the first 12 total rallies (6-6). The Blue Devils took three leads through 9-8 but LIU strung together three straight scores on kills to go ahead 11-9. Fink and Matsumoto scored two of the next three points to give LIU a 13-10 lead and force a CCSU timeout. The Blue Devils fought all the way back and tied the match at 2-2 by closing the set on a 15-8 run, including five of the last six points.

The deciding set opened with LIU taking four of the first points and bringing CCSU to burn a timeout. Out of the break, the Blackbirds kept the pressure on the Blue Devils by scoring four of the next six to make the score 8-3 and bring on the changeover. LIU would take a timeout of its own after CCSU scored three of five to pull within four points (10-6). The Blue Devils continued to draw closer and brought LIU’s lead down to two (13-11). In the end, the Blackbirds were too much for the Blue Devils to handle as kills from Hansson and sophomore Katharina Krepper finished the match and started the celebration.

NEXT UP
LIU will find out its fate during the NCAA Tournament Selection Show on Sunday, November 26 at 9 p.m.