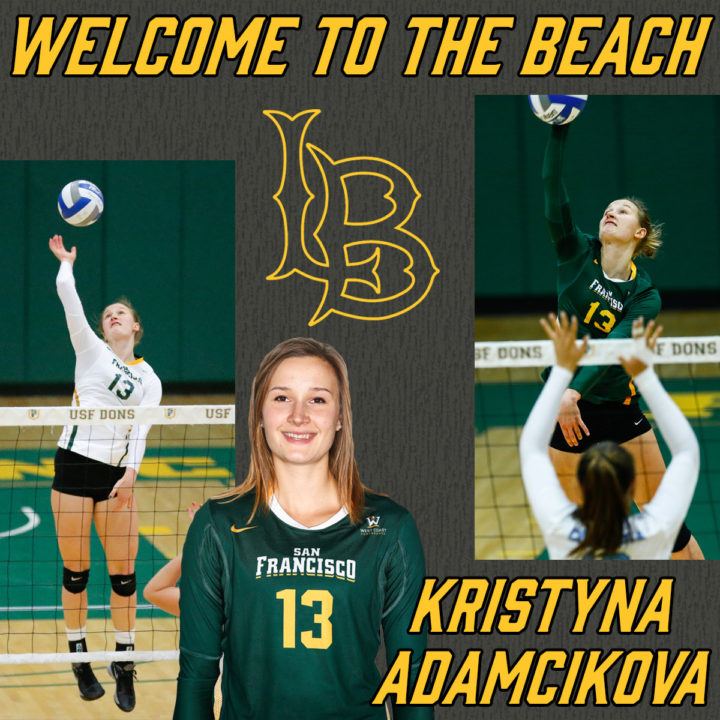 Long Beach State is adding San Francisco transfer Kristyna Adamcikova to its roster for 2017. Adamcikova will be a sophomore in 2017 after she earned West Coast Conference All-Freshman team last season. She will be immediately eligible and have three years left of play.

A 6’0″ outside hitter from Opava, Czech Republic, Adamcikova was a four-time national champion in her home country. She had plenty of experience from her prep career both indoor and on the sand as she participated in three European Championships, a World Championship and played at the Youth Olympic Games. In her lone season in the bay area, she was named WCC All-Freshman Team after ranking eighth in the conference in kills per set (3.42). She was also third in aces per set (0.31) and had four matches of 20 or more kills.

“Kristyna was most of the offense at her previous school last year,” Long Beach State head coach Brian Gimmillaro said in the team’s release of the transfer. “She is an accomplished all-around player; she’s an outside hitter and also a very, very good beach player.”

The release did not note if Adamcikova will play on Long Beach State’s beach team as well, but she is more than capable. For the time being, she will join a 49ers team that won 21 games a season ago and went 13-3 in conference play.