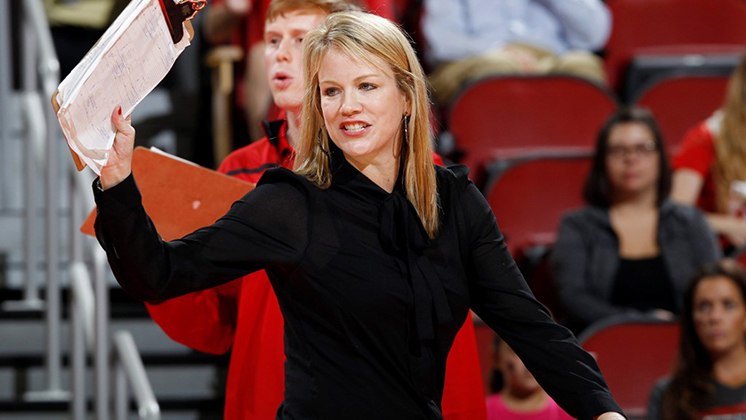 Anne Kordes has resigned as the head coach of Louisville volleyball after 6 seasons in which she's won 4 conference titles. Archive Photo via Louisville Athletics

Louisville women’s head volleyball coach Anne Kordes has announced her resignation, effective at the end of the 2016 season. She cited ‘personal reasons’ for her decision.

“There are aspects of every job that can be challenging and at this point in my life I am finding it hard to be the mom I want to be to my daughter because of the grind and travel of the recruiting season,” Kordes said in a press release. “There is no way around it if you want to be successful as recruiting is your life-line. My struggle isn’t the work, it’s the work out of town. I consider myself to be lucky because of what I have been able to experience as a coach, especially at the University of Louisville. I also consider myself lucky because of what I get to experience as a mom.”

Kordes, in 6 seasons at Louisville, won 4 conference titles. 3 of those came prior to the Cardinals joining the ACC – finishing atop the Big East in 2011 and 2012 and atop the AAC in 2013. Then, after Louisville made the jump into the new Power 5, they won the ACC title in 2015.

She currently has a 130-61 record in her time at Louisville with still 3 games to go and a 272-135 overall career record as an NCAA head coach. Prior to Louisville, she served 7 years as the head coach of St. Louis University, whom she led to 3 NCAA tournament appearances.

Kordes played her college volleyball at Louisville, where during her senior season, Louisville made it to the Sweet 16 of the NCAA tournament and finished with a 29-5 record. She was a 3-time all-conference selection.

Kordes comes from a family of volleyball royalty in the state of Kentucky. Her dad Ron, the coach at nationally-ranked Assumption High School, won his 1000th career match with the school earlier this season and has won 19 state titles with the program. Astonishingly, he won 1000 games as the team’s head coach before he lost his 1000th.

Louisville lost their first game, a 3-1 defeat to Georgia Tech, after Kordes’ announcement, and will finish their season at Clemson and then with home games against Syracuse and Boston College. Even wins in all 3 of those seasons would leave Louisville with just a 12-18 season record and out of the NCAA tournament.