Louisville Serves Their Way to a Sweep of Kennesaw State 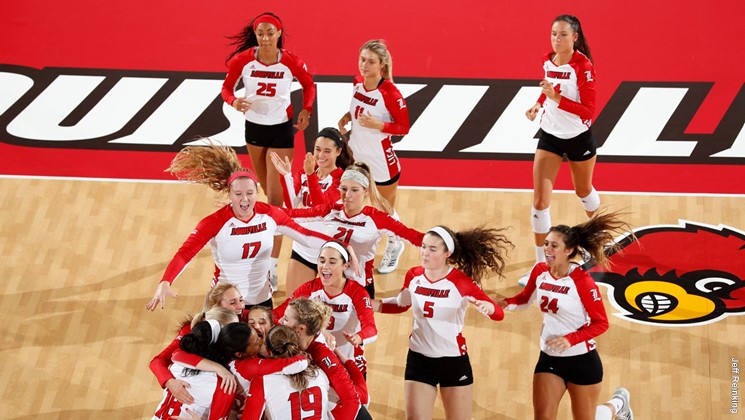 Louisville, Kentucky – Louisville took care of Kennesaw State on their home floor in three sets to improve to 6-4 on the season.

The biggest difference between the two teams was the serve, as Louisville put down 10 aces to Kennesaw State’s two. That not only led to an eight point difference throughout the match, but also helped keep the Owls down to a .189 hitting percentage by forcing them into tough possessions.

Kennesaw State actually hit .444 in the first set as Anaiah Boyer, who led the team with 10 kills for the match, Sydni Shelton (eight kills while hitting .222 for the match) and Liesl Engelbrecht (eight kills while hitting .400 for the match) led the way. However, Louisville hit at a .294 clip which was good enough to pair with six first set aces as Louisville won it 25-21. That serve remained in tact through the match, as the offense and defense rose with it to dominate the second and win the third and final set, 25-20.

In total, six different Cardinals recorded an ace, with Melanie McHenry totaling a team-high of three to go with her 11 kills and eight digs. Wilma Rivera was right behind her with two and also distributed 38 assists for the offense that was led by Tess Clark, who had 12 kills while hitting .385.

Louisville now starts ACC play with Notre Dame and North Carolina while Kennesaw State looks to be a challenger in the Atlantic Sun and starts things off with 2016 conference champ Lipscomb.

LOUISVILLE, Ky. – With a season-high 10 service aces, the University of Louisville volleyball team closed non-conference play with a hard-fought 3-0 (25-21, 25-14, 25-20) win over Kennesaw State University Sunday afternoon at Cardinal Arena. In their fourth sweep of the season, the Cardinals hit .330 for the match, while the Owls only mustered a .189 percentage.

“We came out and played well,” said coach Dani Busboom Kelly. “We let Kennesaw State come out and hit .400. You never want to see any team do that in the opening set. But, we came back with our serve and that was a big improvement from Friday night.”

The first set was a back-and-forth affair, featuring 18 ties and nine lead changes. Following the constant trading of points, the Cardinals were finally able to wrestle control, clinching the set at 25-21 with a 4-0 closing run. Three Cardinals tallied four kills in the set, led by McHenry, who added three digs and a block. McHenry also posted three of Louisville’s six service aces in the set.

Louisville carried the positive momentum into the second set, never trailing and using a .448 hitting percentage to take it, 25-14. McHenry continued her strong performance with another four kills and four digs. The Cardinals stifled the Owls, holding them to just a .057 hitting percentage for the set.

“We took them out of their game, purely on serve, and that was awesome to see,” said Busboom Kelly.

The Owls took an early lead in the third set, but the Cardinals answered with an 8-2 run, capped off by consecutive service aces from junior setter Wilma Rivera. Both squads alternated short runs for much of the set, but Louisville sealed the win, 25-20, with a 5-1 rally.

The Cardinals open Atlantic Coast Conference play on Friday, Sept. 22 with a home match against Notre Dame at 7 p.m.

“We have Notre Dame on Friday and that will be our first ACC match,” said Busboom Kelly. “We’re looking forward to getting conference play going.”

THE STORYLINE:
· Kennesaw State ended non-conference play with a quick turnaround after a physical match last night with a battle at Louisville on Sunday, September 17. The Owls fell to the Cardinals 3-0 in Cardinal Arena.

HOW IT HAPPENED:
The first set was hotly contested with 18 ties and nine lead changes. Kennesaw State was the first to 20, but Louisville used a 6-1 run on their home court to take the opening set. The Owls hit .444, but the Cardinals answered with six service aces to keep pace.

After taking the first set, Louisville carried that momentum into the second set and built a big lead early. The Owls couldn’t recover from the early deficit and fell behind 2-0 in the match.

KSU came out with energy in the third set led by Boyer. After the Owls fell down 13-9, she sparked the Owls with two blocks in a row to tie the score back up at 14. To tie the score at 14, she chased a ball down while sitting on the scorers table before hustling back into play to get her second block in a row.

SCHUNZEL QUOTE
“We took two big steps forward this weekend. A lot of people are going to look at this and see two losses for Kennesaw State. All I see is a big-time volleyball team with heart, determination and resiliency unlike any team I’ve been associated with. We played two extremely high-level sets today in sets one and three. Louisville served the ball very well all day and at times broke our passing, particularly in set two.

The quick turnaround for us was going to make this match pretty difficult to win and certainly we had chances to win two of the sets. Today, Louisville played very well and out served and out passed us for much of the match, which dictated so much of the result.

Now, we will rest, recover and train well this week, and we can’t wait to get going in ASUN play. We’ve never been remotely as ready to begin conference play as we are this fall.

INSIDE THE NUMBERS:
· The Owls finished non-conference play with a 6-3 record.
· Kennesaw State came out hot against Louisville hitting .444 in the first set. Out of the team’s 14 kills, Boyer had five of them.
· Boyer finished with 10 kills in the match to lead the team. Liesl Engelbrecht and Sydni Sheltonwere right behind her with eight kills each.

UP NEXT
The Owls will begin ASUN play by hosting two-time defending champion Lipsomb Bisons in the KSU Convocation Center on Friday, September 22 at 7 p.m. The match will be broadcasted on ESPN3.