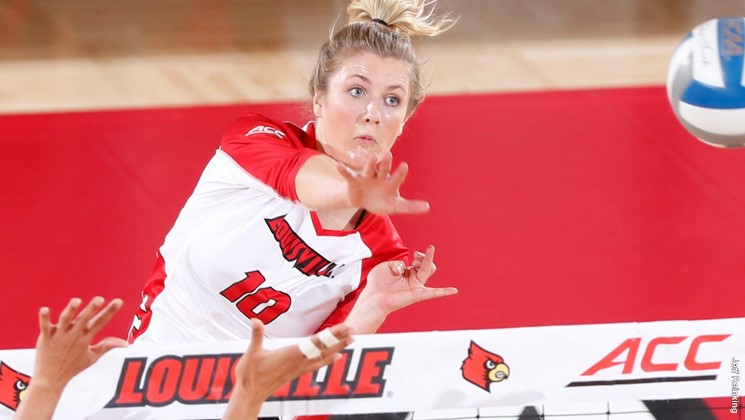 While not mathematically so, Friday’s matchup between NC State and Louisville was almost a play-out game for the ACC title and automatic berth into the NCAA tournament – and Louisville made a statement with an emphatic 3-0 win. The Cardinals hit .280 while allowing NC State to hit just .110 – epitomized by the 13-3 Louisville blocks advantage.

There were some solid, but no monstrous, offensive performances in the game, but the Louisville defense was the story of the day. Melanie McHenry led the Cardinals in kills with 13 (.343 percentage), but also chipped in 4 block assists and a solo for 17.5 total points. Maggie DeJong chipped in another 7 errorless kills and 5 assists + 1 solo block of her own for a double-digit scoring day.

Julia Brown led NC State in scoring with 12 kills (.265 hitting perentage), but that accounted for all of her scoring on the day. The Wolfpack had only 3 total blocks on the day, and two-thirds of those were the responsibility of their setter Kylie Pickrell, who had 2 block assists and a solo.

Pitt put a similar sweep up against Clemson on Friday, meaning that Louisville and Pitt remain dead-locked at 15-2 atop the ACC standings. Pitt’s remaining games should be a comfortable-cruise, against Georgia Tech, Virginia Tech, and Virginia. Louisville has a tougher remaining schedule, with UNC on Sunday and then Boston College and Syracuse next week – but they do have the head-to-head tie-breaker against Pitt if both teams win out.