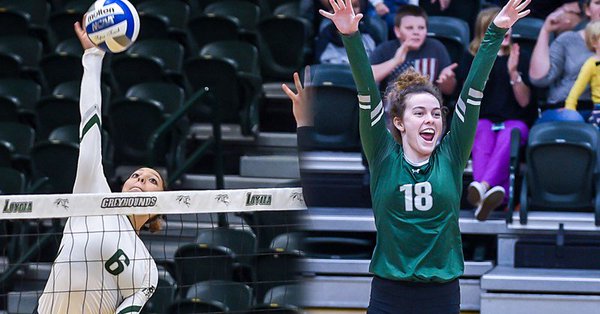 CENTER VALLEY, Pa. — Loyola Maryland swept this week’s volleyball awards as junior outside hitter Ann Ernst was named Patriot League Volleyball Player of the Week and teammate freshman libero Katie Forsythe was selected as rookie of the week, when it was announced by the League office on Monday.

Ann Ernst, Loyola Maryland, Jr., OH, Chicago, Ill.
* Ernst helped the Greyhounds go 2-1 in League play this past week and also took their first set off American since joining the conference in 2013.
* The junior had two matches with 21 or more kills and averaged 4.31 per set to go with 3.23 digs per set.
* Against Army West Point she logged her second career 20-20 game with 21 kills and 20 digs in a Friday night victory.
* Earlier in the week she earned a season-high 22 kills, while hitting .333 against American. She then closed the week with 13 kills and 13 digs versus Holy Cross.

Katie Forsythe, Loyola Maryland, Fr., L, Perry, Ohio
* Forsythe logged three-straight matched with 30 or more digs while averaging 8.15 per set this past week against American (30), Army West Point (34) and Holy Cross (42).
* The rookie broke the school record in digs in a match with 42 in a four-set win over Holy Cross. The 42 digs are also the second-most in Patriot League history since the under 25-point rally scoring was enacted in 2008.
* She also had two aces of her own to go with 17 assists during last week.

After a week filled with record breaking performances from multiple Greyhounds, Ann Ernst and Katie Forsythe we’re recognized as the Patriot League… https://t.co/V6Sm7pRxEz