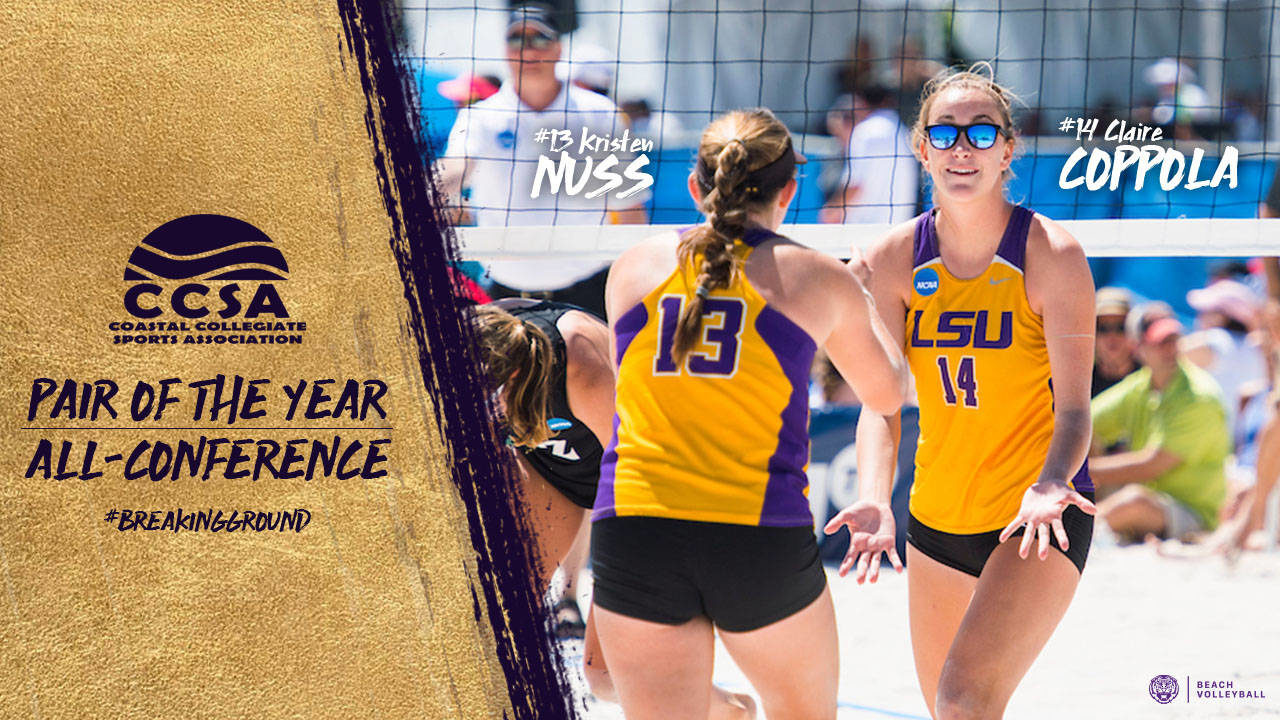 After another outstanding season that saw them win 25 matches, LSU's No. 1 pair of Claire Coppola and Kristen Nuss were voted the 2018 Coastal Collegiate Sports Association (CCSA) Pair of the Year Current Photo via LSU Athletics

LakePoint, Ga. – After another outstanding season that saw them win 25 matches, LSU’s No. 1 pair of Claire Coppola and Kristen Nuss were voted the 2018 Coastal Collegiate Sports Association (CCSA) Pair of the Year as announced by the league office on Thursday. The CCSA Freshman of the Year award was shared by the FAU pairing of Erika Brok and Mackenzie Morris, while South Carolina’s Moritz Moritz claimed his first CCSA Coach of the Year honor.

Coppola and Nuss were brilliant all season long playing at the No. 1 flight for LSU and posted a 25-7 record. They defeated 15 ranked pairs on the season, including four victories against teams ranked in the top-10 of the AVCA National Poll this season. The pair posted two win streaks of eight wins or more, including a 13-match winning streak from March 17-31. They were voted CCSA Pair of the Week on two occasions and picked up AVA National Pair of the Week honors once during the regular season.

They were joined by four other CCSA beach volleyball pairs on the All-Conference team. Tulane’s Madeline Mertz and Kaylie McHugh were the only other pairing to receive unanimous voting to the 2018 CCSA All-Conference Team after picking up a 27-6 record at the No. 1 spot for the Green Wave. The duo recorded ten victories against ranked opponents, including four against top-10 opposition. This season, 22 of their 27 match victories have come in straight sets. They earned CCSA Pair of the Week honors once during the regular season.

FIU’s No. 1 pairing of Federica Frasca and Margherita Bianchin have been one of the top flight pairs of the season as they earn a spot on the CCSA All-Conference Team. The duo posted a 24-4 record during the regular season. They have collected seven wins against pairs ranked in the top-20 this season, with three of them coming against top-10 opposition. They have been on fire lately winning 17 of their last 20 matches heading into the postseason.

They are joined by two Florida State pairs to round out the All-Conference Team. Katie Horton and Hailey Luke have been one of the most consistent and dominant pairs this season for the Seminoles. The duo owns a 24-3 record, which includes a current win streak of 13 matches. The tandem has been shuffled up and down the lineup, but has performed well wherever they are playing, recording at least one win in four different positions. The final All-Conference selection is the pairing of Tory Paranagua and Vanessa Freire. The duo just capped off another great regular season by earning CCSA Pair of the Week and AVCA National Pair of the Week honors heading into next week’s Championship. They have seven victories against pairs ranked among the top-40 in the nation, including two in the top-10. They are 6-0 in their last six matches, not losing a single set in those contests.

The CCSA Freshman of the Year award was shared by Florida Atlantic teammates Erika Brok and Mackenzie Morris. The duo, which played together as a pair all season long, were the winningest duo on the Owls squad this season. They own a 24-4 record, playing most of their matches at the No. 3 position. They posted victories against six nationally ranked teams this season and they were dominant for most of the year winning 20 of the 24 matches in straight sets. The duo was joined on the CCSA All-Freshman Team by Logan Manusky from College of Charleston. The rookie from San Diego, Calif, compiled a 15-7 mark for the Cougars this season, with 14 of her wins coming at the No. 5 position. Five of her wins came against nationally ranked opponents, including a signature win vs. #9-ranked South Carolina.

The All-Freshman team selection was rounded out by LSU’s Hunter Domanski and Tulane’s Addison Hermstad. Domanski is a versatile player for LSU as she has competed in three different positions this season. She own five victories at the No. 2 spot, ten at No. 3 and one at No. 4. She has won eight of her last nine matches heading into the conference championship. Hermstad posted a record of 16-8 in the regular season, including five wins against ranked opponents. She also was moved up and down the lineup, with 10 of her wins coming at the No. 4 position.

South Carolina’s head coach Moritz Moritz guided his squad to another 20-win season as he earns his first CCSA Coach of the Year award. The Gamecocks earned their highest-ever seeding for the CCSA Championship this year as they will be the No. 2 seed after posting a 20-6 mark during the regular season. South Carolina has been nationally ranked all season long, earning a No. 9 ranking in the latest AVCA National Polls.

Major congratulations are in order for our leader, Coach Moritz, who is the @CCSA_Beach Coach of the Year! The #Gamecocks enter the postseason at 20-6, 9-3 in conference play, and are ranked ninth in the country by @AVCAVolleyball. Way to go, Mo! pic.twitter.com/tw4Zmck70G