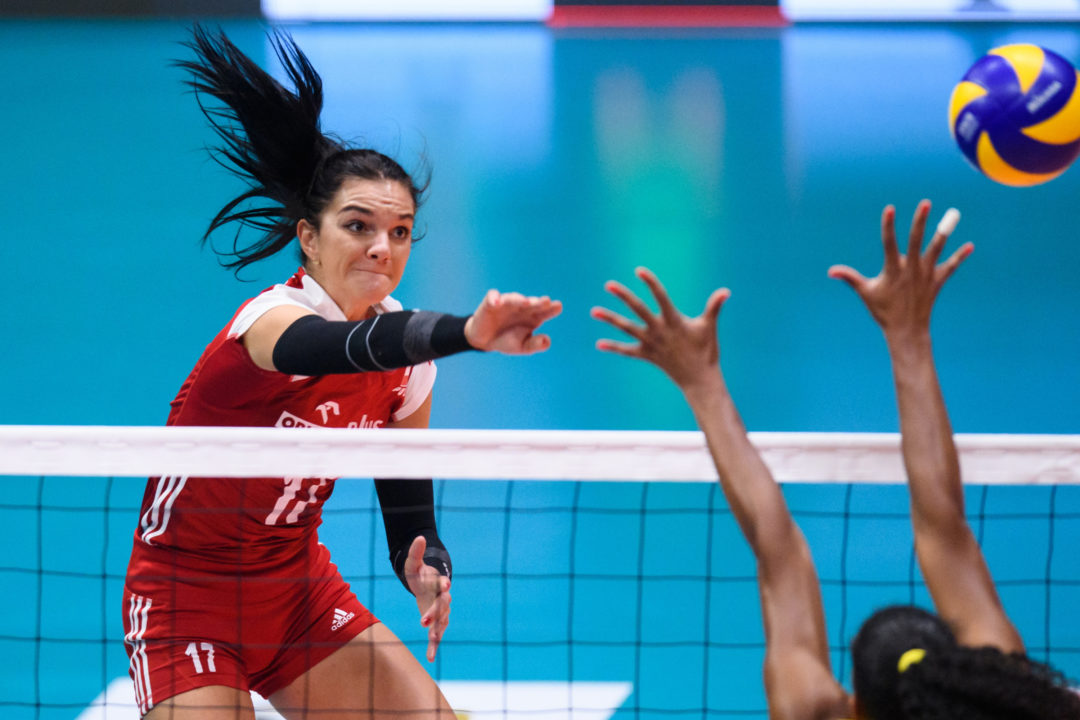 Of the 8 teams entered in the 2018 Montreux Volley Masters tournament, 4 played their 2nd match already on Wednesday, just the 2nd day of the tournament. None of those 4 that played on both of the first two days have yet picked up two wins.

Russia welcomed the defending African Champions Cameroon to the Montreux Masters tournament with a dominant win that didn’t see Cameroon surpass 17 points in any of the 3 sets.

For the 2nd-straight day, Nataliya Goncharova led Russia in scoring with 11 points, including 8-for-17 hitting. Russia had 11 blocks and 9 aces in just 3 sets, and also picked up 20 points on Cameroon errors.

Stephanie Mogoung and Laetitia Bassoko led Cameroon with 9 points each, though their 9-point efforts weren’t equal. Mogoung had 3 kills, 4 blocks, and 2 aces, while all 9 of Bassoko’s points came on kills. Cameroon had only 5 players score in the match.

Russia hit 51% on the day, while Cameroon landed just 34% of their shots.

After Italy was swept by Turkey on day 1, hitting just 36% and giving up 25 points on errors, the Italian side played more to their standard on Wednesday in a sweep of China (the one team in this tournament that isn’t primarily the World Championship roster). On Wednesday, Italy hit exactly 50% and gave up just 11 points on errors.

Italy was led by 18 points from Paola Egonu, who had 14 kills, 1 block, and 3 aces. Ofelia Malinov contributed 3 aces to the effort.

Duan Fang led China with 12 points, followed by Liu Yanhan with 10. They both had 9 kills, but it took them 26 and 32 swings, respectively, to get there. China hit just 30% in the match, which was the lowest percentage of any team on day 2.

In their 2nd match, Brazil had a new offensive leader. Rosamaria Montibeller and Drussyla Costa (the latter in just 3 sets of action after replacing Fernand Rodrigues) had 16 points and 14 kills each, while day 1 points leader Gabi had 15.

But Poland’s Malwina Smarzek, the leading scorer of the Nations League tournament earlier this summer, came through with another huge match, scoring 31 points on 29 kills. The two teams were very similar in most statistical categories, including Poland actually having more errors than Brazil, and the two teams hitting almost identical 43%s. But the 22-year old Smarzek was too good in crunch time, and carried Poland.

The win is probably Poland’s best of the year in a season where they’ve shown flashes of competing with the best in the world, but against full rosters have struggled to string together wins.