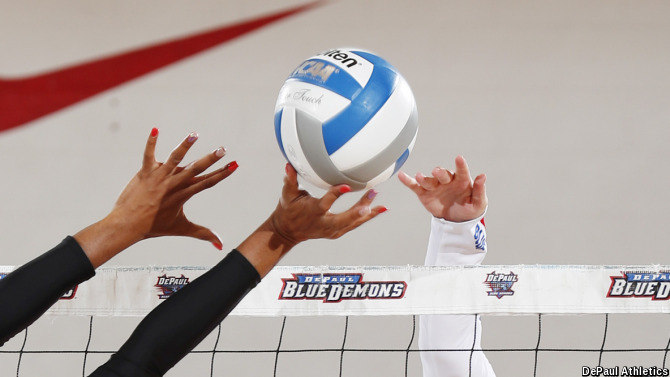 DePaul athletics director Jean Lenti Ponsetto announced today that Marie Zidek has been named head coach of the Blue Demon volleyball program. Zidek has been an assistant coach at the University of San Diego for the last four seasons where she helped the program to four consecutive NCAA Tournament appearances.

“We’re pleased to have Marie Zidek rejoin DePaul athletics as our head volleyball coach,” said Ponsetto. “She has had an amazing career as an assistant coach in the West Coast Conference, the Pac-12, the BIG EAST and the MAC capped off with four straight NCAA appearances and Top 25 rankings at the University of San Diego. Hailing from Chicago’s south side, Marie understands DePaul’s value to the city of Chicago. Her leadership style, infectious energy, philosophy of positivity and tactical expertise were the exact qualities we were looking for to elevate our volleyball program in the BIG EAST and nationally.  Marie is an excellent recruiter with a keen reputation for coaching both sides of the ball at an elite level.  We’re looking forward to her rejoining our DePaul coaching staff.”

Zidek returns to DePaul where she was an assistant coach from 2010-12. Following that stint with the Blue Demons, she was on the staff at Buffalo for one season before moving to San Diego in 2014.

“I want to first and foremost take this opportunity to thank Jean Lenti Ponsetto for this tremendous opportunity,” said Zidek. “Having worked at DePaul very early in my coaching career, her passion for leadership in collegiate athletics; vision for what impact we could have within Chicago and nationally; and fierce focus for each student-athlete’s success made a direct impression on my young coaching mind. She shares in my belief that this program can rise to new heights within the BIG EAST and beyond. I am excited to hit the ground running with our current student-athletes in the gym as well as our future recruits.”

“I also want to thank Jill Hollembeak for all of her hard work during the interview process. There is no one better that personifies the passion and personality of caring for each student-athlete that DePaul has on a day to day basis, and I cannot wait to work directly with her in this new era. For the past 11 years, I have been working in this profession always with the goal in mind to create an opportunity for myself to build something special in a special place. To have this opportunity present itself at DePaul is a dream come true for me and my family. Together, we can take this program to new heights. GO BLUE DEMONS!”

The Toreros qualified for the NCAA Tournament in each of the last four seasons and were ranked as high as fifth in the nation during the 2016 campaign. As an assistant coach, Zidek tutored two West Coast Conference Players of the Year, six All-WCC team members and two All-WCC freshmen team honorees. San Diego won the West Coast Conference title this past season and senior setter Kristen Gengenbacher was named a third team All-American by the AVCA.

Zidek was named a 30 Under 30 Award winner by the AVCA and has served as a conference representative and publications director for assistant coaches in each of her previous stops in the BIG EAST, Mid-American Conference and West Coast Conference.

She graduated from Northern Illinois in 2006 with a Kinesiology degree and completed a master’s degree in Exercise and Sports Science at Oregon State in 2010. Zidek is also a certified strength and conditioning coach by the NSCA.