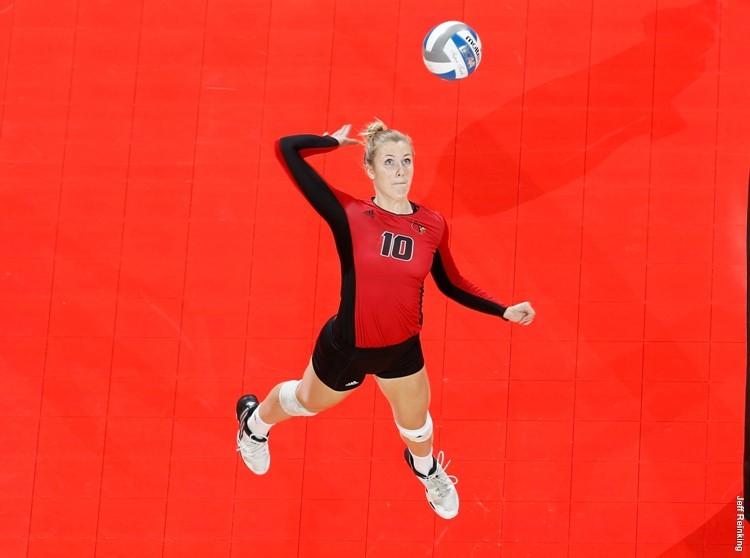 Melanie McHenry led the way with 18 kills for Louisville in a sweep of #24 Florida State. Archive Photo via Louisville Athletics

Louisville, Kentucky – Louisville continued their home court success in a sweep of #24 Florida State that ended with a wild third set of play. The win muddles up the top of the ACC standings, as Florida State appeared to be the top contender in the conference.

The Cardinals were led by Melanie McHenry in the match as she totaled 18 kills (while hitting .385) in just the three sets of action. It wasn’t just the offense either, as McHenry posted 11 digs for a double-double and a pair of assists.

Overall, Louisville was the much better offensive team in a match that didn’t have a ton of blocking (just four blocks for each team). They had 52 kills and 14 errors (.270) compared to 39 kills and 17 errors (.172) for Florida State. An aggressive but inaccurate serving match from Louisville provided 13 service errors though, keeping the Seminoles around for the match. Additionally, both back rows played solid defense considering the lack of block, as Cecilie Woie (19 digs) helped Florida State out-dig Louisville and Molly Sauer (17 digs) 67-64.

Louisville now will stay home for another Florida school as Miami (FL) comes to town as they look for another victory. Florida State isn’t done with tough road matches for the week as now they head to South Bend, Indiana to take on (RV) Notre Dame.

Outside hitter Melanie McHenry had 18 kills with 11 digs to lead the University of Louisville volleyball team to a 25-20, 25-20, 31-29 upset of No. 21-ranked Florida State in ACC action Friday night in a sold out Cardinal Arena.

“First of all its awesome to see this place full and rocking and our players they felt really prepared and when they are prepared they play well,” said UofL head coach Dani Busboom Kelly. “They came out and took it from Florida State, we’ve challenged them to improve on their errors and they had very few attack errors tonight and that was really good to see.”

“We didn’t use all our timeouts  even though it was so close because that’s one thing we’re trying to let them work through some things,” said Busboom Kelly. “This team, they want it and I never have to question that. So our leadership took over. You saw Molly Sauer make some big plays and then obviously Melanie  at the end. “We need our six-rotation players to step up when the games are on the line and they all did that tonight.”

UofL maintained the lead early in the second set, taking a 16-12 lead just after the media timeout.  UofL hit 18-15 on a Maggie DeJong kill and sparked an FSU timeout.  Louisville got set point on a Seminole service error.  DeJong scored on the slide to give the Cardinals the 25-20 win and a 2-0 set lead going into the break.

In the third set. the teams tied 18 times with the lead changing hands six times.  UofL got to set and match point at 24-23 on a FSU error and then proceeded to trade points back and forth.  The Cards tied at 27 and Melanie McHenry scored four of the Cards final five points before a Seminole error gave the set and match to the Cardinals.

The Cardinals face an undefeated Miami team on Sunday afternoon at 1 p.m. in Cardinal Arena.

“Miami has one of the best outside hitters in the ACC so we have challenge to slow her down,” said Busboom Kelly about Olga Strantali of the Hurricanes.

In the first set, the Seminoles stayed tough on defense to counteract Louisville’s strong front line. FSU led with two team blocks, while its 19 digs slowed down the quick tempo of the Cardinals’ offense. The set stayed close and was tied nine times before the Cardinals went on a run and began cutting down on errors to take the set 25-20.

The Noles started off strong in the second set and stuck with it through the first few long rallies, but the Cardinals pulled ahead early, earning as much as a 10-6 lead. The Seminoles started fighting back, tying up the set three more times until Louisville eventually ran with a lead to take the set 25-20.

The third set showed how closely matched the two teams were, as the set saw 18 ties and six lead changes. Both teams battled at the end as the set was tied eight times after the 21-21 tie.

It was the Cardinals’ tough offense that helped them edge out the Seminoles in the end, as it outhit FSU with a .218 hitting percentage and 18 kills. The third set was the only time the Cardinals saw more digs and total blocks than the Seminoles, which was just enough help to give them the set 31-29 to take the match.

The team will continue its first conference road trip of the season as it heads to Notre Dame on Sunday, Oct. 1. The team will return home next week to host Miami on Wednesday (Oct. 4) and Pittsburgh on Friday (Oct. 6).