“Azerbaijan showed that you can win with one player in Volleyball” 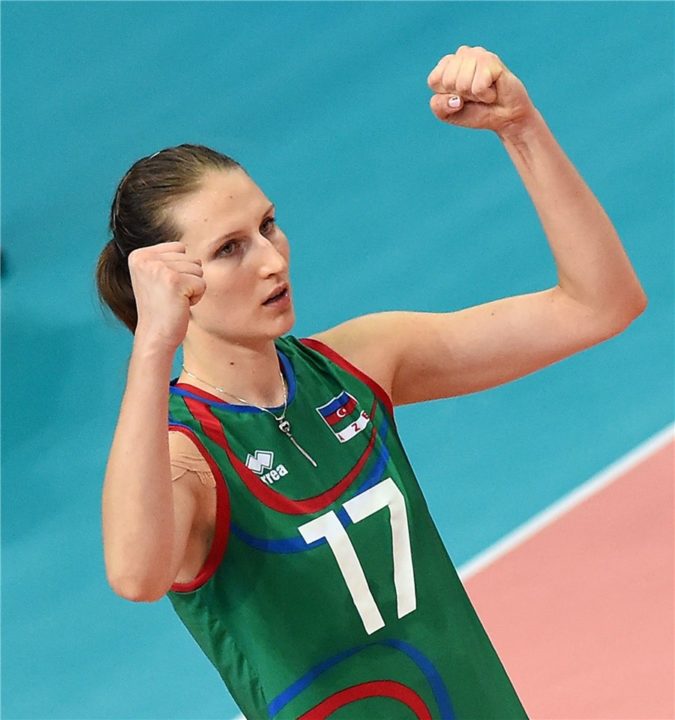 Azerbaijan’s outside hitter Polina Rahimova is having the tournament of her life in Baku, greatly building her case to be recognized as the world’s best outside hitter. Her play is dazzling the home-crowd and opponents alike, drawing high praise from everyone who is witnessing her performance. Here is what German coach Felix Koslowski had to say today in a CEV interview after the Azeri player torched his team for 21 points in only 3 sets, eliminating Germany from the tournament in the process:

“In the first set Azerbaijan showed that you can win with one player in Volleyball, because Polina Rahimova scored all alone. I think she is the best spiker in the world at the moment. My team played and fought well, but if Rahimova has a day like this, no one can stop her.”

The 28 year old, 6’6″ outside hitter, who plays for Turkey’s Fenerbahçe at the club level, is as of right now the tournament’s runaway MVP. She is averaging a ridiculous 7.2 points per set, having scored 20+ points in all of her team’s matches, at 51.3% spiking efficiency. She is also the tournament’s second best server at 0.62 aces per set, only 0.02 behind Serbian Tijana Boskovic.

She is no stranger to amazing offensive performances, as during her time in Japan in 2015, Rahimova achieved 58 points in a single match, setting a world record, who once belonged to Team USA’s Nicolle Fawcett. She will need to continue her unbelievable play, as her team will need all the help it can get from its players in their semifinals match-up against title favorites Netherlands tomorrow.