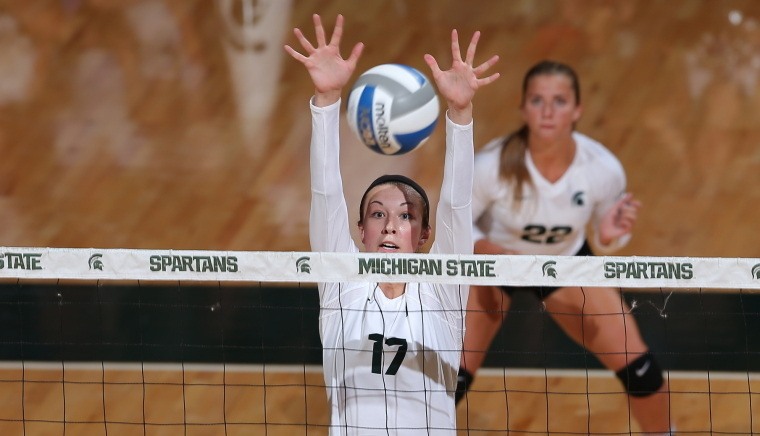 The team captains selected their teams, which proved to be very evenly matched as two of the three sets went extra points and all were settled by the minimum two points.  The teams were also evenly matched in their intensity, as the teams traded some savvy moves as well as big swings.

“The object of these exhibitions are twofold from a program standpoint,” said head coach Cathy George.  “On the court, you’re looking to put your players in game situations, which are hard to create when you look across the net and see your roommate.   I thought we brought a good level of intensity today and both teams really had to fight – it was good for our staff to see for sure, and good for our players as we enter our final week of preparation before our first tournament next weekend.

“Another thing that’s important for us is that it allows us to welcome our fans to the 2017 season,” continued George.  “For an intrasquad match, we had a great crowd here today.  We have tremendous support, and I want to thank everyone who came out to watch today.  From our Sideout Club, to our families and fans – this was a great atmosphere to start our season.  We hope to keep you all entertained throughout the year.”

In the opening set, the teams put on an entertaining back-and-forth battle with several lead changes and the largest lead of the frame at four points when the Green Team going up 21-17 before taking an eventual 25-23 victory in the frame.  Green hit .324 and got five kills each from senior Autumn Bailey and newcomer Alyssa Chronowski.  For the White team, they also had two five-kill performers:  Kranda had five kills on eight swings , hitting .625, and freshman Meredith Norris contributed five kills.  Both setters each had 13 assists.

In the second set, White pulled even by taking a 28-26 win.   It was another back-and-forth affair, as White took an early lead and held a lead as large as six points, but Green kept clawing back into the game.  Autumn Bailey led Green with seven kills and seven digs, taking 17 swings in the frame. Freshman Julia Hatcher had three kills, a pair of digs, and a solo block.  For the victorious White team, Madie Haggerty had five kills without an error, while both Kranda and Garvelink added four.  The White team hit .275 in the second set, compared to .152 for the Green Team.

The Green team opened a large lead in the third set, going up 10-3 after challenging a no-touch call that was overturned after a replay.  White battled back into it, pulling within three at 16-13.  Another extra-point set ensued – the level of play continued to rise, as both sides were mixing big swings with some finesse as they battled toward the end of the frame.  Bailey added eight kills in the frame for Green, and Chronowski delivered the kill shot down the line to seal the victory for the Green team, capping her day with a fifth kill of the set and 11th of the match to go along with 10 digs for a double-double.  Bailey also contributed a double double on a match-best 20 kills, 14 digs and an ace.  Rachel Minarick had 39 assists.  Freshman Jamye Cox recorded a match-high 17 digs.

On the other side of the court, Kranda finished with 13 kills and three blocks, and Alyssa Garvelink had 12 terminations and four blocks (one solo). Norris had 10 kills and five digs, and sophomore setter Maggie Midgette contributed 38 assists and three aces.  Three from Team White finished with double-digit digs:  Sarah Washegesic had 15, Abby Monson 11, and redshirt junior Maddie Haggerty had 11 digs and just missed a double-double with nine kills.

Michigan State officially opens the 2017 season next weekend at Georgia Tech, where MSU will play Furman on Friday evening before tangling with Auburn and the host Yellow Jackets on Saturday.