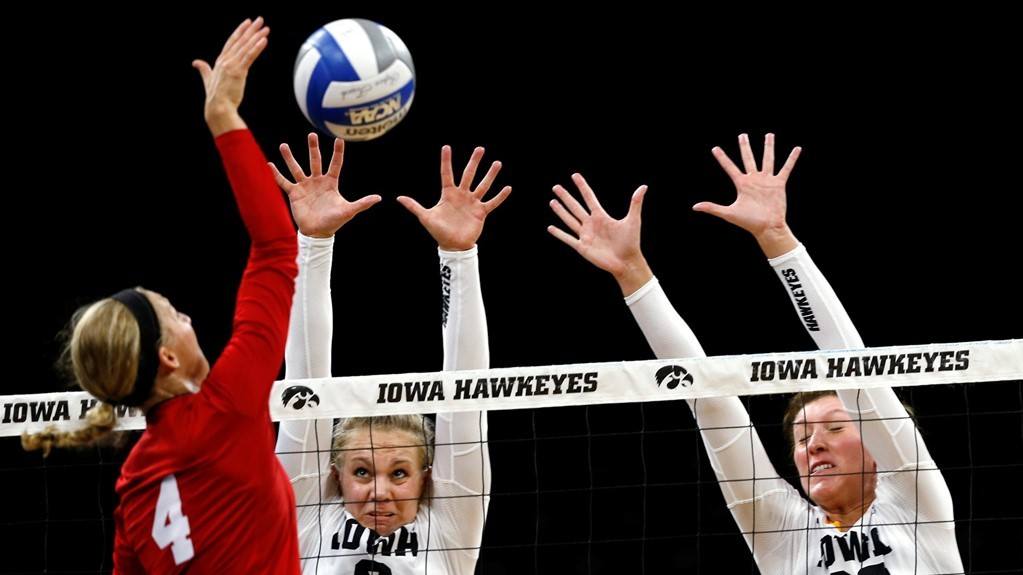 SPARTAN SYNOPSIS
No. 20 Michigan State opened Big Ten play with a 3-0 sweep of visiting Iowa on Friday night at Jenison Field House. MSU wins its seventh consecutive match to improve to 12-1 overall and start Conference play 1-0., while Iowa falls to 10-3 and 0-1 in Big Ten play.The Spartans took their 14th consecutive victory over the Hawkeyes, and 12th straight by a 3-0 score. Kasey Reuter and Lauren Brobst led the visitors with eight kills each. For MSU, Autumn Bailey had 11 kills, hit .455, and added six digs; countryman Allyssah Fitterer had 10 kills and hit a match-best .643. Alyssa Garvelink tied her season best with seven blocks, four in the final set.Michigan State controlled the pace of play all night, withstanding the runs of 3-4 points that the Hawkeyes would put together to try to get back into the game. MSU held double-digit leads in each of the first two sets, and managed to keep the scrappy Hawkeyes at bay in the third when they were able to stay much closer with the Spartans than the first two frames.

A crowd of 3.443 fans took in the Friday night match, with another good crowd expected for the Spartans’ showdown with No. 1 Nebraska at 7 pm on Saturday evening. The Spartans will honor their alumni during Saturday night’s game, in particular the 1976 team which went to the AIAW Elite Eight. Saturday’s game is also a Children’s Cancer Awareness game, and the program will collect art supplies at the door for the pediatric ward playroom at Sparrow Hospital.

SET ONE: The Hawkeyes got the first point on the board, but MSU reeled off the next five to take the lead on a combination of strong serving and impressive play at the net. MSU never took its foot off the gas, hitting .556 through Iowa’s second time out at 18-6. The Hawkeyes hit -.062 to that point, and the Spartans didnt allow back-to-back points to the Hawkeyes until Iowa trailed 21-8; UI then put together a 3-0 run to make it 21-11. A big kill from Fitterer killed the Iowa momentum, and kills by Bailey and Allyssah Fitterer got MSU to set point. Iowa fought off set point by getting a block off the pin, a block out of bounds, and back-to-back kills by Lauren Brobst, and a Spartan error for a 5-0 run that trimmed MSU’s lead to make it 24-18, but Garvelink connected on her first kill of the night to seal the win, 25-18. Bailey and Fitterer each had four kills in the frame, while Garvelink had two blocks. MSU settled in to hit .346 in the frame.

EAST LANSING, Mich. — The University of Iowa volleyball team fell to No. 20 Michigan State, 3-0, Friday evening at Jenison Fieldhouse. The Hawkeyes fall to 10-3 overall and 0-1 in Big Ten action with the loss.

Serving proved to be a difference maker in the match. The Spartans registered nine service aces, while the Hawkeyes recorded nine errors at the serving line.

“We told our group that we needed to serve and pass well,” said UI head coach Bond Shymansky. “Instead we put up nine service errors and they put up nine aces. They are the top serving team in the conference and one of the top five in the country, but we have to fight that off. That’s the mental toughness part. We have to keep working on that as a group.”

Michigan State’s offense came out firing in set one, using three early aces and five kills to take a 13-4 lead. The Spartans continued to control the momentum, leading by as many as 13, before the Iowa rallied. The Hawkeyes utilized a 6-1 rally to pull within six. Kills by seniors Lauren Brobst (2) and Ashley Mariani (1), junior Jess Janota (1), and redshirt sophomore Kasey Reuter (1) aided the Iowa rally. The Hawkeyes couldn’t overcome the deficit; however, as Michigan State went on to win the set, 25-18.

After trading points early, Michigan State used a 6-1 run to take a 12-7 lead in the third set. The Hawkeyes came storming back; however, using a 5-1 swing to pull within one (14-13). Reuter (1) and Janota (1) added kills to the rally, sophomore Molly Kelly served an ace, and Mariani, Reuter, and sophomore Reghan Coyle each registered blocks. Following the media timeout, the Spartans outscored the Hawkeyes, 4-1, to establish distance. They held on from there, winning the set, 25-18.

Reuter and Brobst paced the Iowa offense with eight kills apiece. Reuter was the most efficient, hitting .421 with eight kills in 19 attempts with no errors. Senior setter Loxley Keala dished out 29 assists, junior Annika Olsen led the team with 13 digs, and Mariani and Coyle added three blocks apiece.

“Kasey is one of our team captains, and she’s just a great addition to what we are doing,” said Shymansky. “She’s so dynamic as an attacker, and great teammate out there. She’s been working hard to show her uniqueness and find a way to contribute and add value. Her spark was great for us, and we think we can get that from any of our players on the bench. They just have to know what they are capable of contributing.”

The Hawkeyes return to action tomorrow night with a 6 p.m. (CT) contest against the 22nd-ranked Wolverines in Ann Arbor, Michigan.