Minnesota Fights From 0-1 To Defeat Oregon State In Comeback 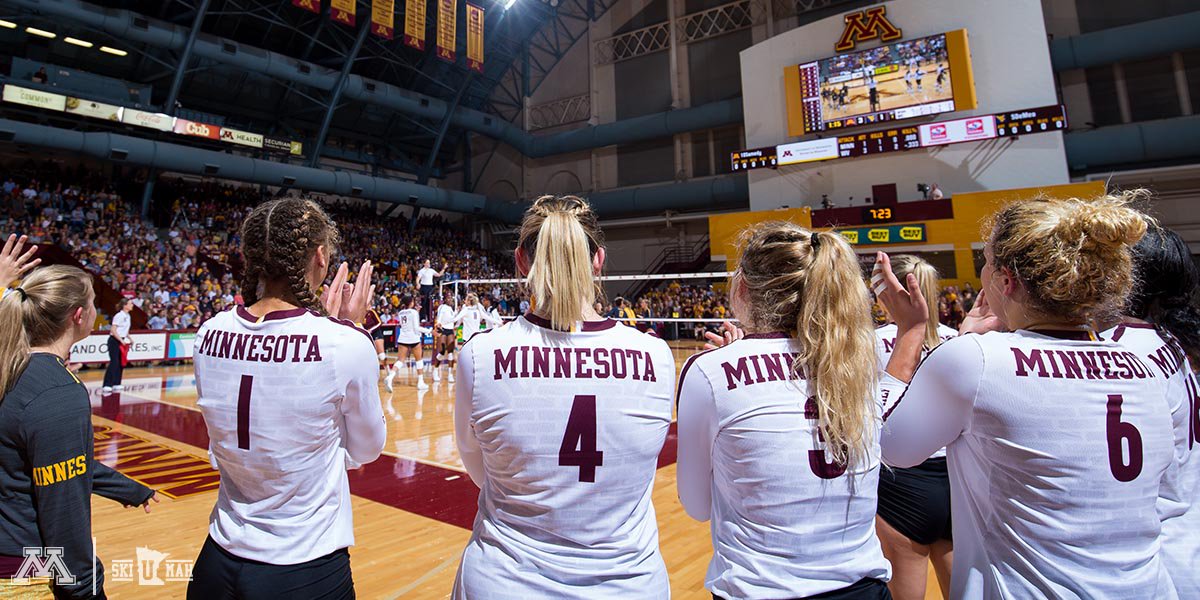 #3 VolleyMob ranked Minnesota takes down Oregon State after going down 0-1 to begin the match in a comeback win.  Current Photo via Minnesota Athletics

#3 VolleyMob ranked Minnesota takes down Oregon State after going down 0-1 to begin the match in a comeback win.

The first set was close until the score was tied up at 14 all, then Oregon State jumped out to an 18-15 lead – which they continued to build on until they took the first 25-19. Minnesota bounced back in the second set to take a 9-6 lead early and continued that lead until they tied up the match at one all.

Stephanie Samedy led the Gophers to the win with 16 kills on a .405 hitting clip while also picking up 10 digs for a double-double. Alexis Hart and Molly Lohman also chipped in double-digit kills with 11 and 10, respectively. Setter Samantha Seliger-Swenson dished out 42 assists, nine digs and five blocks. In the backcourt, Dalianliz Rosado and Alyssa Goehner picked up 20 and 10 digs, respectively.

For Oregon State, Mary-Kate Marshall put down a match-best 21 kills while Haylie Bennett added another 11. Setter Kylee McLaughlin handed out 41 assists and 13 digs for a double-double.

Minnesota improves to 9-0 this season, while Oregon State drops to 8-2 this year.

Minnesota was led by Stephanie Samedy when she had a double-double 16 kills and 10 digs, followed by Alexis Hart with 11 and Molly Lohman with 10. Regan Pittman had seven kills and a team-best seven blocks. Dalianliz Rosadohad 20 digs, followed by Lauren Barnes with 13 and Alyssa Goehner with 10. Samantha Seliger-Swenson had 42 assists, three aces, nine digs and tied a career-best five blocks. As a team, the Gophers hit .277 to the Beavers’ .139 and held an 11-9 block advantage.

Minnesota is back in action tonight, when it faces host Boise State, tonight in Boise, Idaho.

Set Breakdown:
First Set: Oregon State limited Minnesota to just a .079 hitting clip and outblocked the Gophers, 3-1, to take a 25-19 first set win. Tied through 14, Oregon State built an 18-15 lead as Minnesota called its first timeout of the set. The Beavers continued to build their lead to 22-18 as the Gophers called their second timeout of the set. Oregon State, however, continued to add the pressure when it added three kills for its 23rd, set point and set win.

Second Set: The Gophers responded with hitting .344 and had four blocks for a 25-18 set win. Minnesota opened the second set with a 9-6 lead off a Hart kill, however, Oregon State tied up the set at 9-9. Minnesota later gained a 13-11 lead off a Pittman kill and also pushed the score to 14-12 with another kill. Minnesota added to its lead when it produced four-consecutive blocks for an 18-12 lead. Coming all on Lauren Barnesserve rotation, Minnesota in all collected five points, including an ace for a 19-12 lead. Minnesota finished off the second set with a Samedy kill for a set win and tie the match at 1-1.

Fourth Set: Minnesota opened the fourth set with an 8-3 lead as the Beavers used their first timeout of the set. The Gophers pushed their lead to seven at 13-6 after a block from Lohman and Seliger-Swenson. After another OSU attack error, the Beavers used their second timeout of the set as Minnesota led, 14-6. Hart pushed the Gopher lead to 10 off a kill for the 16-6 lead and added another kill for a 19-6 lead. Seliger-Swenson later pushed the Gophers to set point off back-to-back aces, while an Oregon State attack error gave the Gophers the set and match win.