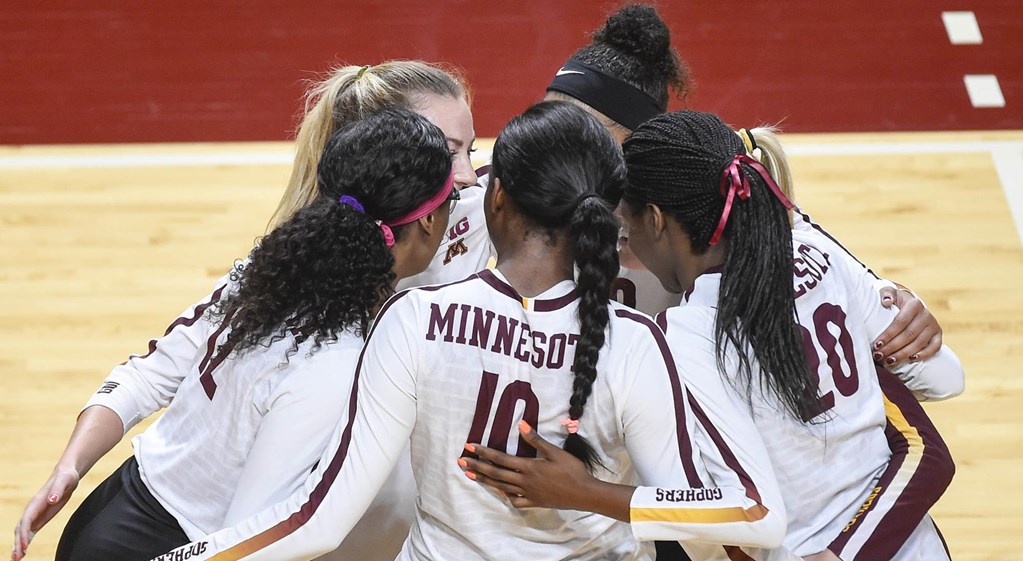 • Contributed 33 points and averaged 4.50 kills per set as the No. 7 Gophers swept No. 4 Penn State and Maryland

• Against the Nittany Lions, the sophomore led all attackers with 14 kills, had 10 digs, a team-best five blocks, an assist and an ace

• Hit .310 and amassed another match-best 13 kills in 29 swings, and accumulated four blocks against Maryland

• Garners her third career Player of the Week decoration

• Had 21 kills on a hitting clip of .391, with nine digs and six blocks against Michigan

• Added 12 kills on a .417 hitting percentage and eight digs against the Spartans

• Led the Big Ten through one week of conference play with 6.17 digs per set

• Led team with 14 digs in a three-set win over Rutgers and currently stands fifth in Big Ten overall stats with 4.69 digs per set

In Allegra Rivas’ first two career Big Ten matches she:
• Leads the conference with 6.17 digs per set
• Had the most digs in a three set B1G match in four years

Your Big Ten Defensive Player of the Week – @allegrarivas‼️

• Led No. 7 Minnesota to sweeps of No. 4 Penn State and Maryland averaging 11.83 assists per set in the opening weekend of Big Ten play

• Against the Nittany Lions, tallied 40 assists and completed the double-double with a team-best 16 digs in the third set, to help the team hit .366

• Grabs her 12th career Setter of the Week award

• Tallied her first collegiate double-double against No. 4 Penn State, hitting .303 with 13 kills and 11 digs

• Added her second double-double of the weekend with 11 kills and a team-high 15 digs in No. 7 Minnesota’s win against Maryland

• Accepts her first career Freshman of the Week honor

• Tallied a season-high assists in four-set matches with 44 against No. 18 Michigan

• Wins her first career Freshman of the Week decoration