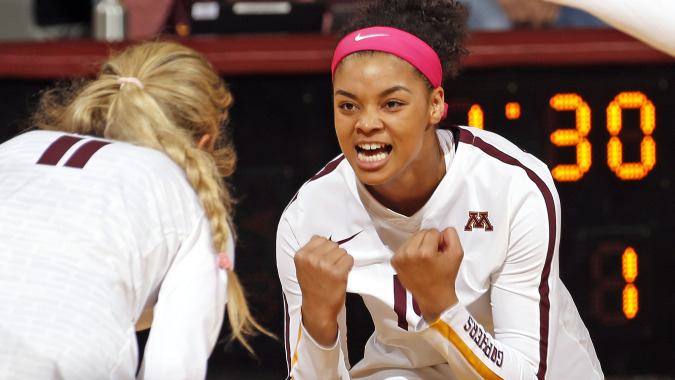 This week's Big Ten Player of the Week comes out of Minnesota in Alexis Hart after helping the Gophers to an unbeaten weekend.  Current Photo via Minnesota Athletics

This week’s Big Ten Player of the Week comes out of Minnesota in Alexis Hart after helping the Gophers to an unbeaten weekend. Also earning awards this week are Penn State’s Kendall White, Minnesota’s Samantha Seliger-Swenson, Illinois Megan Cooney and Wisconsin’s Dana Rettke.

Player Of The Week

On the week, Hart helped the Gophers to wins over Purdue and Iowa while averaging 4.5 kills and 1.2 digs per set on a .367 hitting percentage. Against Purdue, Hart threw down 11 kills on a .308 hitting clip along with two digs and two aces in the straight-set victory. In the team’s sweep over Iowa, Hart put down a career-best 16 kills along with five digs and four blocks on a .412 hitting performance.

This is Hart’s first career Player of the Week honor with Minnesota last receiving the honor on August 28, 2017, when Stephanie Samedy garnered the award.

White was a monster in the back row for the Nittany Lions, as she picked up 26 digs, added four assists and an ace on the week. Her defensive performance helped keep Penn State’s opponents to a low .219 hitting percentage.

In the team’s win over Michigan State White picked up 13 digs along with three assists and followed that performance up with another 13 digs in the Nittany Lions sweep of Michigan.

Seliger-Swenson helped the Gophers to sweeps over Purdue and Iowa this weekend, averaging 12.5 assists per set. In both matches, she combined for 75 total assists and registered double-doubles in each. Against Purdue, Seliger-Swenson dished out 36 assists and 15 digs to help the Gophers hit .298 for the match and followed that up with a 39 assist and 10 dig performance against Iowa.

This is Seliger-Swenson’s 10th career Setter of the Week honor and fourth this season. This is a back-to-back award for her as she picked up the award last week.

Cooney contributed huge numbers of the Illini this week and she averaged 3.2 kills per set as Illinois went 2-0 for the weekend. In the team’s three-set sweep over Ohio State, Cooney put down 11 kills on a .333 hitting clip while posting eight kills and three digs against Maryland.

This is Cooney’s first-ever Freshman of the Week accolade with the last Illinois player to garner the award being Jacqueline Quade on September 25, 2016.

Rettke has been a strong presence for the Badgers this season, continuing that trend into this weekend with 3.0 kills and 2.0 blocks per set on a .459 hitting percentage. Against Nebraska, Rettke post a match-best eight blocks along with 12 kills and one ace while recording nine kills, six blocks on a .400 hitting performance against Indiana.

This is Rettke’s fifth Freshman of the Week honor with her last coming on October 2, 2017.