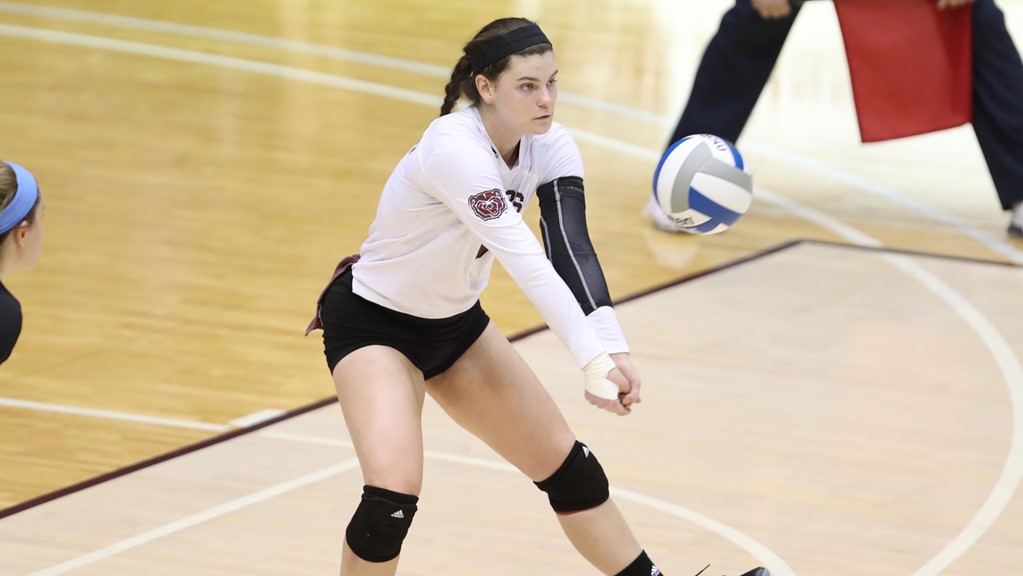 In a crazy defensive match between Missouri State and Drake last Friday, where the Bears won the match in five - the Bears also broke a number of school records in the five-set win.  Current Photo via MSU Photo Services

In a crazy defensive match between Missouri State and Drake last Friday, where the Bears won the match in five – the Bears also broke a number of school records in the five-set win.

The first of a few records broken was the team’s 153 digs in the match, which established a single-match school record for Missouri State. The next highest in school history was 144 digs set against Arkansas State on October 7, 1989. This record is also tied for the fourth-highest in Missouri Valley Conference history.

Also highlighting more on this digs record, four players for the Bears recorded career-bests in digs that night – Emily Butters with 44, Lily Johnson with 32, Daniele Messa with 29 and Brianne Dixon with 16. Butters 44 digs tied her for fifth-most in Missouri Valley Conference history and was just two digs shy of the league record held by Missouri State’s Cara Hackman. Additionally, Butters 44 digs are the third most by any player this season in the NCAA.

Butters, Johnson and Messa’s dig totals all surpassed 25 digs making them the first teammates in school history to reach more than 25 digs in a single match. Additionally, it was the first match in Bears history where two players reached 30 or more digs in a match. Johnson joins former Missouri State player, Susan Ruch in accomplishing 25 kills and 30 digs in a match when Ruch posted those number against Northern Iowa on November 18, 1989.

Also in the match, Drake broke a school-record for their 130 digs in the match. Kylee Macke picked up a team-best 27 digs while Courtney Morehead and Kyla Inderski each added another 24 apiece.

Another record broken by the Bears during the match were the total number of attacks taken by Missouri State – 266. This broke the record established on September 21, 1988, against Missouri with 262. The Bears posted 82 kills in the match, which is the most since the team recorded 88 against Wichita State on September 23, 2005.

Missouri State is now 8-0 in Missouri Valley Conference play after following up their five-set win over Drake with a four-setter against Northern Iowa. This is the best conference start for the team since 2009 and is the fifth time in school-history accomplishing this feat.

The team now has a nine-match winning streak, which is a feat they have accomplished for three consecutive seasons. Additionally, they have extended their school-record Missouri Valley Conference win-streak to 24 matches and it’s NCAA-best road streak to 19 straight wins.