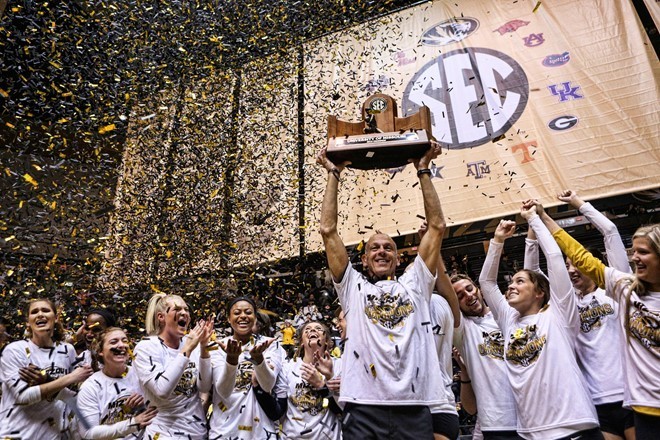 Mizzou owns the head-to-head tiebreaker over SEC Co-Champion, Florida, and will earn the conference’s automatic qualifier bid for the upcoming 2016 NCAA Tournament.

In the second set, both teams competed well early with the score tied at 14 apiece. Mizzou responded with a 7-1 scoring run and looked primed to run away with the set. Tennessee wouldn’t go quietly however, tallying a big scoring run of its own to even the score at 24 apiece. In extra points, senior Carly Kan (Honolulu) recorded a big kill, followed by a costly Volunteers error clinched a 26-24 victory for the Tigers.

Junior Courtney Eckenrode (The Woodlands, Texas) continued her climb up the Mizzou Volleyball record book, as her 23rd assist of the evening placed her sixth all-time in career assists.

Mizzou wrapped up its memorable night at Hearnes with a dominant third and final set. The Tigers produced 12 kills on .320 hitting to round another outstanding offensive attack.

Mizzou is primed to make its 13th NCAA Tournament since 2000. The Tigers learn their first and second round destination and opponents on Sunday, Nov. 27. Fans can watch the official NCAA Division I Women’s Volleyball Selection Show live on ESPNU.

Missouri jumped out to a 7-2 early lead with a 6-0 run and led the rest of the way. The Vols closed the lead to 8-6, but Missouri responded by winning six of the last seven points to extend the lead to 14-7. Missouri won eight of the final 10 points of the set to take the opener 25-15. Missouri hit .400 for the set while the Vols were held to .176.

In the second set, Missouri broke a 14-14 tie by rattling off five consecutive points, but the Vols slowly climbed back in the set. Down 23-18, Tennessee won six of seven points at a stretch and fought off a pair of set points. Bri Holmes recorded a kill to tie the set 24-24, but Missouri won the next two points to take the set 26-24.

The Tigers broke away in the third set with a 4-0 run to go up 7-5 and lead the rest of the way. Treiber cut the lead to 10-9, but Missouri won the next three points to pull back ahead. Missouri, which hit .320 in the set, won five of six points to clinch the final set and match, 25-16.