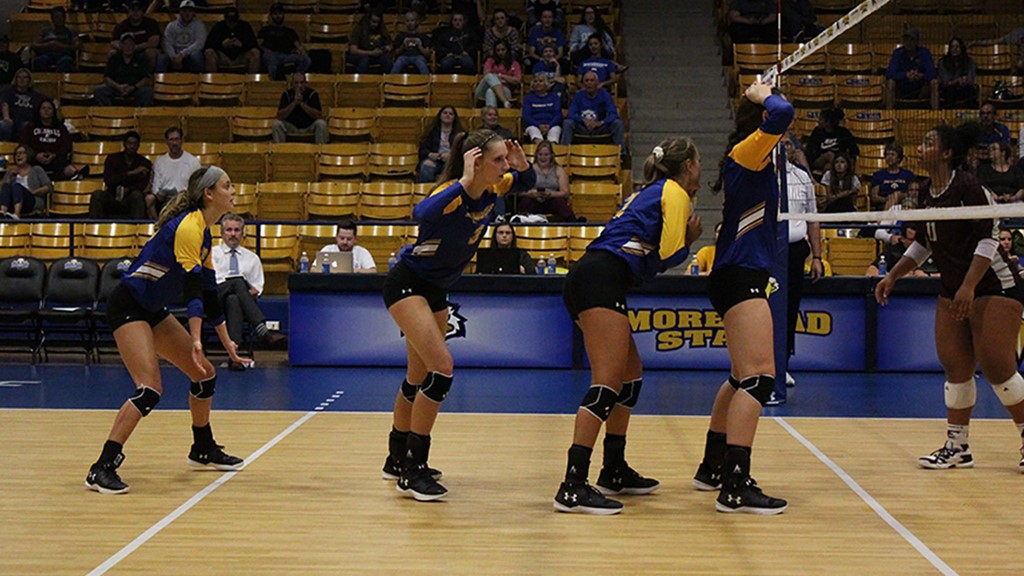 MOREHEAD, Ky. – After concluding a three-game homestand with a sweep on in-state rival Eastern Kentucky, Morehead State volleyball hits the road for the first time in Ohio Valley Conference play. The Eagles (12-4, 3-0 OVC) travels to Clarksville, Tenn. to face Austin Peay (13-2, 3-0) on Saturday.

Both the Eagles and Governors sit atop the OVC standings through the first week and a half of conference play. Both teams took all three games they’ve played to open league play with Morehead State taking care of business at home while Austin Peay won all two of its three on the road.

The Eagles enter after taking a straight set match with Eastern Kentucky that saw Morehead State record 48 total kills while hitting at a .250 clip. Sophomore outside hitters Olivia Lohmeier and Lauren Rokey led the way, collecting 17 and 10 terminations, respectively. Redshirt sophomore setter Chandler Clark dished out 41 helpers on the team’s 48 kills, averaging 13.67 assists per set, including 17 in set two.

On the season, Lohmeier and her 192 kills lead a quartet of Eagles with 100 or more kills. Rokey (170), redshirt senior middle blocker Jessie Wachtman (143), and senior right-side hitter Jordan Jones (122) rounds out the group. The foursome’s 627 combined kills on the year represent 83 percent of Morehead State’s total kills.

Leading the success offensively, Clark-the reigning OVC Setter of the Week-had dished out 621 helpers, including 141 through three matches to start conference play. Her total assists number ranks 13th in the NCAA entering the weekend while her 10.71 assists per set ranks 38th in the country. In conference only games, Clark averages 12.82 assists per set, a total that leads the OVC.

Defensively, the Eagles remain the stingiest team in the league, leading in four different defensive categories. Morehead State leads the league in limiting opponent hitting percentage (.155), opponent assists (10.12 per set), opponent kills (10.88 per set), and opponent service aces (0.76 per set). The success comes both at the net where the Eagles have blocked 129.0 total shots and in the back row where Morehead State digs up 14.55 balls per set.

Saturday’s match will be streamed via the OVC Digital Network while live stats will be available through MSUEagles.com. First serve is set for 3 p.m. ET.