MVC Set for Five Friday Matches, Including 9-0 UNI vs. Drake 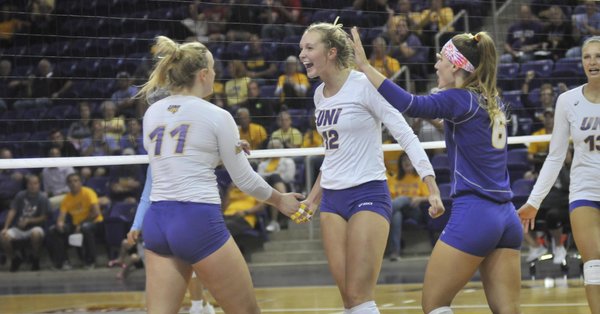 UNI remains unbeaten in MVC action after another perfect week of league play, sitting at 9-0 for the first time since 2011. Illinois State sits 8-1 in MVC play and is off to the program’s best Valley start since going 18-0 during the 2014 season. Current Photo via Northern Iowa Athletics

UNI remains unbeaten in MVC action after another perfect week of league play, sitting at 9-0. The last time UNI opened MVC play 9-0, they went on to finish 18-0 in league play in 2011, which was the program’s third straight 18-0 MVC campaign.  The Panthers have only dropped five sets in league play, posting a 27-5 mark in conference sets.

UNI’s RPI sits No. 22 this week. Entering this week, the Panthers are one of only nine teams nationally to have seven matches against teams ranked in the Top 25 of the RPI, joining Stanford, Illinois, USC, Texas, Wisconsin, Nebraska, Creighton and Oregon. UNI is also one of only 20 teams nationally to have at least two Top 25 RPI wins. UNI’s schedule is rated as the 14th toughest nationally.  The Valley ranks 8th in the RPI among 32 conferences.

Illinois State sits 8-1 in MVC play and is off to the program’s best Valley start since going 18-0 during the 2014 season.  The Redbirds  are a perfect 5-0 at home this season and have posted a winning record in Normal in seven of the last eight seasons.

Through matches of October 16, only five teams nationally have six or more wins in 2018 than they did during the 2017 season. Bradley and Loyola represent the MVC on the list.

UNI continues to receive votes in this week’s AVCA Top 25 poll.  The Panthers are receiving 55 points in the poll and sit 26th overall entering this week’s action.  The Panthers have a showdown with No. 18 ranked Marquette Sunday in Cedar Falls.