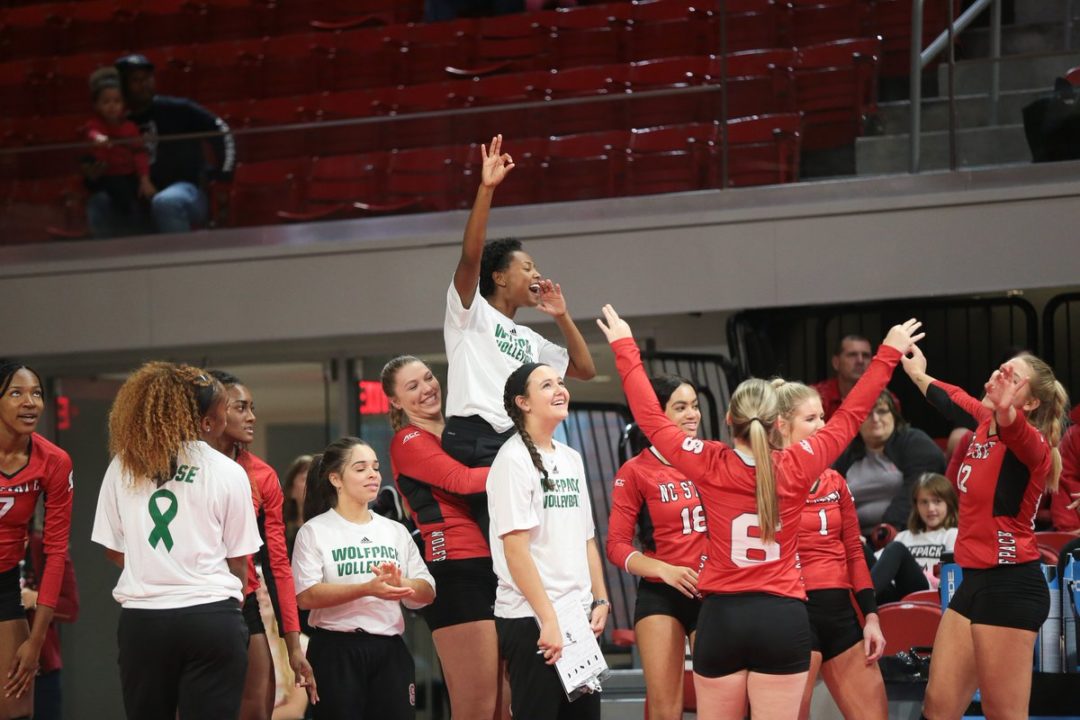 The NC State volleyball team will conclude a four-match road swing this weekend when it travels to Clemson and Georgia Tech. Current Photo via NC State Athletics

RALEIGH, N.C. – The NC State volleyball team will conclude a four-match road swing this weekend when it travels to Clemson and Georgia Tech. Friday’s match against the Tigers is set for 7 p.m. inside Jervey Gym, while Sunday’s contest will have a 1 p.m. first serve from O’Keefe Gym.

Both matches will be broadcast live on the ACC Network Extra, accessible through Watch ESPN and the Watch ESPN App.

Last Time Out
In its last outing, the Wolfpack came up short at Syracuse, 3-1. After dropping the first set, NC State rallied with a strong second set to even the match at one before the Orange edged the Pack in a pair of close sets to earn the victory.

Freshman Jade Parchment turned in the best performance of her young career against the Orange, as she put down a career-high 20 kills to go along with a career-best .400 attacking percentage.

She tallied three kills in the first set, seven in the second set, six in the third and four in the fourth set. That total (20) is the second most by an NC State player this season.

Narrow Margin of Error
NC State has played 51 sets this season that have been decided by five or fewer points with the Wolfpack winning 24 of those sets. In perspective, the Pack has played 79 total sets in its 20 matches on the year, so nearly 65 percent of sets have been determined by only a few points.

The Higher, The Better
The Wolfpack is a perfect 9-0 on the year when recording a higher team hitting percentage than its opponents.

Wolfpack in the ACC Rankings

NC State has been great defensively this season, as the Wolfpack ranks second in the ACC in digs per set with 15.49. The squad is also among the top five in opponent hitting percentage, limiting opponents to just a .185 clip.

Individually, senior libero Makenzie Kuchmaner is second in the conference with 4.70 digs per set and Kylie Pickrell is third in the league in assists per set with 10.67. Teni Sopitan and Melissa Evans rank eighth and 10th, respectively, in kills per set with 3.56 and 3.41 kps.

Lauryn Terry ranks ninth in the ACC in hitting percentage with a .344 mark.

In the Wolfpack’s last trip to Clemson, the squad set a rally-scoring era program record for blocks in a three-set match with 14.5. The Pack turned in a dominant performance to earn the 3-0 sweep and remain unbeaten in ACC play at the time with a 4-0 mark.

Terry also logged a career outing, as she tallied a personal-best 11 blocks. That total tied as the second most by any player in the NCAA last season for a three-set match.

Clemson turned in a strong non-conference slate, as the Tigers were 10-4 heading into ACC action but the squad has struggled in conference play. In their most recent week of league competition, Clemson earned a 3-0 sweep at Miami.

It was the Tigers first ACC sweep in four years. Heading into Friday’s matchup, NC State has won the last four meetings against Clemson including a season sweep last year with a pair of 3-0 wins.

Brooke Bailey leads the squad offensively with 278 kills, averaging 3.20 kills per set. The Tigers setter Gabby Easton is the reigning ACC Freshman of the Week and has dished out 10.94 assists per set. Defensively, Torie Frederick leads the way with 3.15 digs per set.

Clemson has compiled a .219 team attacking percentage and opponents have logged a .249 clip.

In the Wolfpack’s trip to Georgia Tech last season, the squad earned its first win in Atlanta since 2011 with a 3-1 victory. The match featured 36 ties and 12 lead changes, as NC State’s three set-wins were by a combined nine points.

The Georgia Tech Yellow Jackets own a 13-10 overall record heading the weekend after suffering a pair of 3-1 losses to Florida State and Miami in the last outings. The Yellow Jackets have been extremely tough at home, as GT is 11-3 in matches played inside O’Keefe Gym.

It will be the Wolfpack’s second trip to the facility this season, as NC State competed in the SEC-ACC Challenge hosted by Georgia Tech but the teams did not play each other.

Freshman outside hitter Mariana Brambilla headlines the Tech offense with 3.64 kills per set, while Mikaila Dowd has compiled 3.38 kps. At setter, Matti McKissock and Lexi Dorn have split time with the former handing out 6.78 and the latter 4.82 aps. Defensively, Maddie Tippett leads the back row with 3.69 digs per set.

The Yellow Jackets have tallied a .231 team attacking percentage and opponents have recorded a .225 clip.