NCAA Championship Preview: LBSU and UCLA Go to Battle for the Title 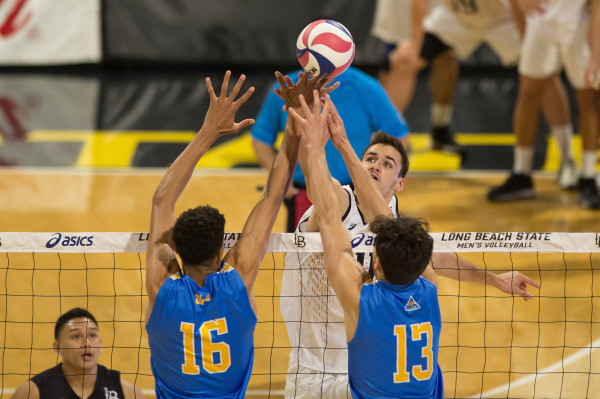 Long Beach State and UCLA are meeting for the 2018 National Championship. Check out VolleyMob's preview of the match. Archive Photo via LBSU Athletics/Volleyball

Long Beach State and UCLA are your two NCAA finalists after the 49ers had to overcome the two-time defending champs while UCLA defeated Courthe team that downed them for their league title. That brings us to one final match, with the two southern California teams dueling it out for the third time this season. The first two went to Long Beach State, but one was with a key piece injured for UCLA, and the Bruins have this one at home. That should make for an enticing challenge, as the 49ers look for their second-ever title – with the first coming in 1991 – while the Bruins are searching for championship number 20 and first since 2006.

OFFENSE: TOO CLOSE TO CALL

This may represent the top two offenses in the country, or at least close to it. LBSU has even higher efficiency numbers while UCLA has some higher totals. Both teams have plenty of balance and options to throw it to with electric setters to get it started. Therefore we make this category too close to call as it is near a tie.

The 49ers opponent hitting percentage is only trumped by King, who plays in an easier league in the Conference Carolinas. Their combination of solid blocking and floor defense produces arguably the top overall defensive unit in the game, so while UCLA is strong on this end, it doesn’t overcome what the Beach has produced all season long.

SERVING: TOO CLOSE TO CALL

LBSU has slightly more aces per set this season, but both teams have produced a wealth of aces. The difference is that the 49ers are more efficient at it and produce less serve errors, but the flip side is that by UCLA doing so they will give up extra points in exchange for putting their opponent out of system more often.

The 49ers have so much balance and strong passing throughout that they’ve developed one of, if not the best, serve receive teams in the country. It’s what leads into their efficient attack with options and an elite setter, as they consistently can overcome strong serves more than most others to keep their offense in system. Again, this isn’t a weakness for UCLA, it’s just been better over the course of the season for Long Beach State – although they gave up 10 aces to Ohio State in the semifinals.

Long Beach State won both regular season matches with UCLA – one in Long Beach and another in Pauley Pavillion – in four sets. However, the meeting in Los Angeles – which came second in the series – was devoid of UCLA’s kills-leader Christian Hessenauer, who was injured. That ended up being the only loss at home this season for UCLA, who sports a 19-1 mark in Los Angeles too, just like this one is. The Bruins also have the championship pedigree and have won it all in nine of the last 10 championship matches at Pauley Pavillion as they look for title number 20.

While both teams have plenty of options and balance around the court and we get to see UCLA at home against LBSU with Hessenauer against TJ DeFalco and company, the setter battle highlights this match with arguably the two best in the entire country:

The home court advantage should make things very intriguing in this one, along with the Hessenauer factor at home unlike the last meeting between the two. That combined with Ma’a and the balance of UCLA gives them a great shot at winning the NCAA title, but LBSU has thwarted challenger after challenger this season. We predict they get pushed to the limit, but DeFalco, Kyle Ensing, Tuaniga and company have enough for the 49ers to win their first NCAA Championship in a little less than 30 years behind balanced attack and a smooth passing that could cancel out the aggressive UCLA serve.