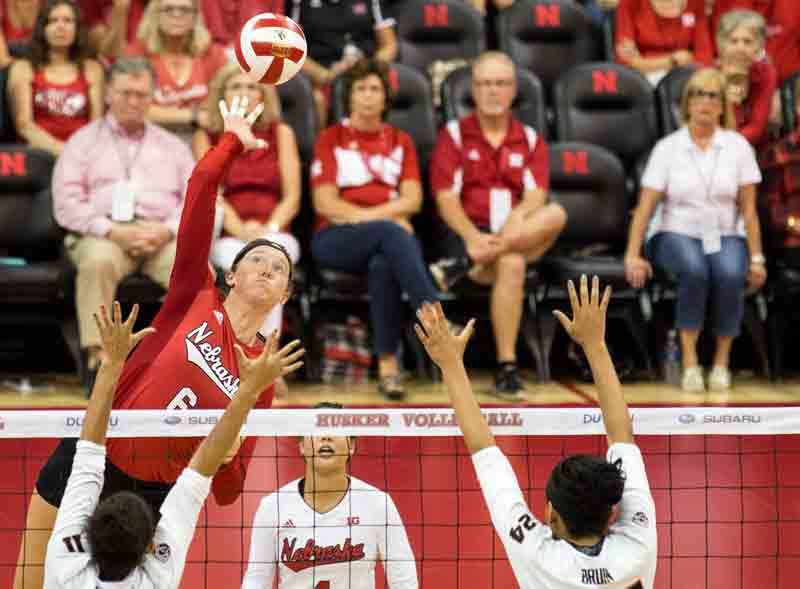 #1 ranked Nebraska took to the road this week to participate in the Lobo Classic in Albuquerque, New Mexico. First up on the docket was a Canadian university team out of Montreal.

The Canadian team has just begun practicing for their season which will begin next month. Last season Montreal took fifth in the Canadian Interuniversity Sport (CIS) – Canada’s equivalent of the NCAA. Playing as part of the New Mexico-hosted Lobo Classic so each team at the tournament would get three matches in for the week.

Nebraska hit .333 for the match, while keeping Montreal to a negative -.080 hitting percentage.

ALBUQUERQUE, N.M. – The Nebraska volleyball team began its run of three matches in three days at the Lobo Classic on Thursday with a 25-14, 25-10, 25-12 sweep of Montreal University in an exhibition match.

NU outhit Montreal .333 to -.080. The Huskers had big advantages in blocks (9-2) and service aces (6-1). Justine Wong-Orantes served three of the aces and had 13 digs. Kelly Hunter had two aces with 27 assists, four digs and four blocks.

Montreal, of the Canadian Interuniversity Sport (CIS) will open its regular season in late October. The Carabins finished fifth at the CIS Championships last year and have won seven of the last nine conference championships.

Set 2: Nebraska carried the momentum into the second set by taking a 9-2 lead. The Huskers stepped up their defense even more, holding the Carabins to -.129 hitting in the 25-10 win.

Set 3: Montreal came out of the intermission and grabbed a 4-1 lead, but three kills by Boender and aces from Wong-Orantes and Kadie Rolfzen helped the Huskers climb back to take a 15-8 advantage with a 9-1 run. Holman and Tiani Reeves combined for a stuff block for set point at 24-11, and Holman finished it off with a kill. After trailing 7-6 the Huskers finished the match on a 19-5 run for the sweep. NU held the Carabins to -.133 hitting in the final frame.

Up Next: The top-ranked Huskers resume regular-season action on Friday against Arkansas at 6 p.m. (CT). It will be carried on the Husker Sports Network, including 107.3 FM in Lincoln and 105.9 FM in Omaha.