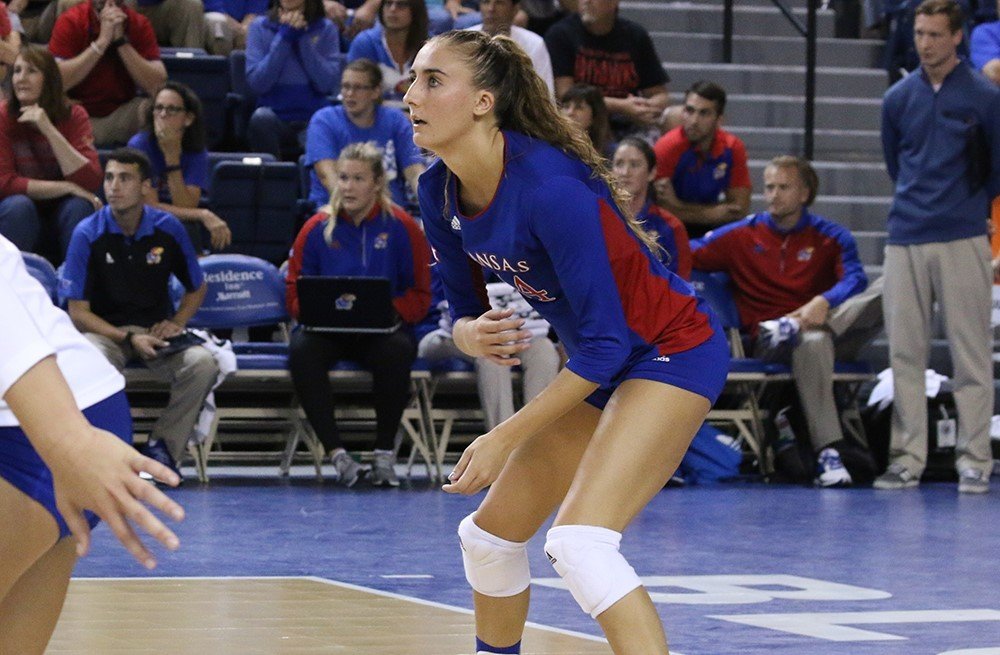 Omaha, Neb. – The opening match of the Bluejay Invitational was a five-set thriller lead by fourth-ranked Kansas over Creighton.

Kansas took the first set 25-21 with the help of First Team All-American Kelsie Payne who posted five kills that set. The Jayhawks jumped to a quick 5-1 lead, but the Bluejays rallied back to take a 15-14 lead. With the score tied up at 16 apiece, Kansas took another 5-1 run at the Bluejays, who fought back within two twice, but an ace by Tori Miller ended the opening set in favor of Kansas.

The second set tied the match with a score of 25-23. Jaali Winters produced seven of the team’s 15 kills for the set. Lydia Dimke added 11 of her 50 assists of the match and six digs for the set. Creighton trailed 22-20 before they went on their own 5-1 run on the Jayhawks, who made a serving error on set point.

Creighton jumped to a quick 16-8 lead over Kansas in the third set. The Jayhawks fought-back coming within one point at 21-20 and 22-21, before three consecutive Bluejay kills put the team ahead of Kansas 2-1 in the match.

Kansas’s Madison Rigdon helped to lead the Jayhawks to a fourth set victory with her own seven kill set. Creighton fought off five different set points before Rigdon put down her seventh kill of the set and Payne and Kayla Cheadle combined for a block on set point to force a deciding fifth set.

The fifth set proved to be a battle for both teams with five ties and two lead changes. Creighton lead the way at 8-6 when the teams switched sides, but Kansas dominated the rest of the match, taking the next four points and would not trail again. The Bluejays would tie the match up at 10-all, when consecutive Rigdon kills would give Kansas the boost they needed to close out the match 15-13.

OMAHA, Neb. – Fourth-ranked Kansas volleyball remained unbeaten after withstanding a test from preseason-No. 18 Creighton in front of a packed home-opening crowd at D.J. Sokol Arena on Thursday night to open the Bluejay Invitational. The Jayhawks won their second-straight five-set match, 3-2 (25-21, 23-25, 21-25, 28-26, 15-13).

Junior outside hitter Madison Rigdon led the Jayhawks (7-0) to their 22nd-straight regular-season nonconference victory with a match-high 24 kills, 11 digs and four aces to account for 30 of KU’s 80 total points.

“There were some big-time swings late, where everyone knew where the ball was going and she still hit it well,” Kansas head coach Ray Bechard said. “Madison is really playing at a great level for us. We needed every point she scored tonight.”

Kansas trailed Creighton two sets to one going into a crucial fourth set. The Jayhawks stormed back from a 9-4 deficit in the fourth to eventually win in extra points, 28-26. With the help of three kills from Rigdon during a stretch of six set points, the Jayhawks were able to force a fifth and deciding set.

Neither team led by more than two points in a tight fifth set. Rigdon recorded the last three kills of the match for Kansas, but two Creighton service errors proved to be the Bluejays’ Achilles heel. Creighton (2-4) served out of bounds to give KU a 14-12 lead, followed by a long serve on match point to clinch the fifth set, 15-13, and the win for the Jayhawks.

“I was pleased on a lot of levels, and disappointed on a lot of levels,” Bechard said after the match. “Seems like we dug a hole for ourselves – down 2-1, 9-4 in the fourth set. It was not a thing of beauty tonight. Tonight was about using 10, 11, 12 players who converted on their chances and dug-in to beat a good team when we didn’t play our very best.”

KU’s regulars were dependable, as always.

But it was KU’s newcomers and reserves whom helped hold the door for Kansas to eek-out a road win against Creighton – a 2015 NCAA Sweet 16 team – on the road.

“I love my teammates – I know they have my back,” Rigdon boasted. “I really like the way Patricia (Montero) communicates with me on the court. Ashley (Smith) did a phenomenal job coming off the bench. So did Kayla (Cheadle) – Kayla played great. That just shows how versatile our team is and how many people can impact the game.”

UP NEXT
Kansas returns to D.J. Sokol Arena on Friday to face Chattanooga at 3:30 p.m. The Jayhawks then cap-off a stretch of three matches in three days, in two cities, when hosting Northern Iowa in Lawrence on Saturday evening at 6 p.m.

OMAHA, Neb. — Creighton Volleyball had fourth-ranked Kansas on the ropes in both the fourth and fifth sets, but the Jayhawks remained unbeaten in a five-set thriller to open play at the Bluejay Invitational on Thursday night before 1,289 fans at D.J. Sokol Arena.

Lydia Dimke (50 assists, 15 digs) and Jaali Winters(21 kills, 15 digs) both had double-doubles for CU in a valiant effort in what would have been the highest-ranked opponent the Bluejays have ever beaten. Freshman Brittany Witt led the Bluejay defense with a season-high 24 digs while tying a school record by needing just six matches to reach 100 career digs. Taryn Kloth added 15 kills for CU, while Lauren Smith had a season-high 10 blocks.

The Jayhawks, who own a nation-best 37-3 record over the last two seasons, were put to the test in a match that lasted 2:35. Madison Rigdon had a career-high 24 kills and added 11 digs to lead KU’s offense, helping offset a strong CU defensive effort against returning First Team All-American Kelsie Payne. Payne had 11 kills and six digs on season-low .098 hitting. KU’s other returning First Team All-American, Ainise Havili, dished 43 assists and had 10 digs on .455 hitting. Cassie Wait showed why she’s one of the nation’s best liberos, as her 33 digs were five shy of the arena record and tied for third-most in D.J. Sokol Arena history by a CU opponent.

Kansas won the first set 25-21 behind five kills from Payne. The Jayhawks raced to a 5-1 lead early, only to see the Bluejays rally to take a 15-14 lead. With the score even at 16-all, the guests embarked on a 5-1 run. CU twice got within two, but an ace by Tori Miller closed out the opening set in favor of KU.

The Bluejays tied the match with a 25-23 second set, producing 15 kills and 20 digs. Winters had seven kills and Dimke added 11 assists and six digs in the frame. CU trailed 22-20 late before a 5-1 run of its own, including a KU service error on set point.

Pinpoint serving from Megan Ballenger and Amanda Foje keyed a pair of 5-0 runs as Creighton raced to a 16-8 lead in the third set. KU closed quickly, drawing within one point at both 21-20 and 22-21, before kills from Winters, Marysa Wilkinson and Kloth gave CU a 2-1 lead in the match. Witt had 11 digs in the third set alone, while Smith had a hand in five of CU’s six blocks. The Jayhawks hit a scant .019 in the third set loss, as Rigdon accounted for five of KU’s 11 kills.

Rigdon kept up that momentum in the fourth set, burying seven kills to help KU overcome an early 9-4 deficit. Wait had 13 of her match-best 33 digs in the fourth set to extend the match. Creighton saved five different set points before a Rigdon’s seventh kill of the set and Payne and Kayla Cheadle combined for a block on set point to force a fifth set.

The fifth set featured five ties and two lead changes. Creighton was in front 8-6 when the teams alternated benches, but KU scored the next four points and did not trail again. Consecutive Rigdon kills after CU tied the set at 10-all gave KU the two-point margin it would need, as the teams traded six straight sideouts to close out the match. Each of KU’s last two points came on Bluejay serving errors, as CU made 12 miscues on the night at the stripe.

Creighton returns to action on Friday at 6 pm when it hosts TCU. Kansas plays Chattanooga at 3:30 pm to start the action on a busy evening on The Hilltop that also includes a pair of soccer games at nearby Morrison Stadium as part of the school’s annual Socctoberfest celebration.

NOTES: Creighton’s 12-match home win streak was snapped just one win shy of tying the school record of 13 … Fourth-ranked Kansas is the highest-ranked volleyball team to ever play a match at D.J. Sokol Arena … Lauren Smith made her 95th consecutive start … Brittany Witt‘s six straight matches of 10+ digs to start her career is tied for third-longest in program history with Julianne Mandolfo (2010) … Witt’s six matches to reach 100 career digs ties a school-mark previously done by Bianca Rivera in 2007 …Creighton fell to 44-26 in five-set matches underKirsten Bernthal Booth, and 9-3 at D.J. Sokol Arena in fifth sets … Creighton is 0-3 in five-set matches this year, the first time its lost three or more such matches since going 3-3 in 2010 … Creighton had been 113-9 under Booth when leading a match 2-1 and 251-14 when owning a better hitting percentage than its opponent before tonight’s loss … The match was the first to use the challenge review system (instant replay) at D.J. Sokol Arena. Both teams challenged a pair of plays, but no plays were overturned on the evening … Creighton fell to 5-64 all-time against ranked teams, 1-25 against top-10 foes, and 1-22 at home in contests against the top-25… Prior to Thursday, Kansas had lost just two of 20 sets all season, and had never trailed in sets in any match this season … Jaali Winters 66 attack attempts were one shy of the Bluejay Invitational record … Cassie Wait’s 33 digs tied a Bluejay Invitational record for one match.