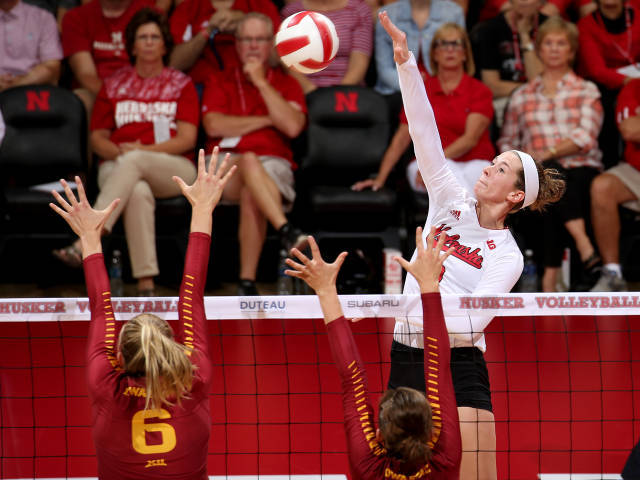 The No. 1 Nebraska volleyball team takes its 4-0 start to the season to Albuquerque, N.M., for the Lobo Classic this week. Photo Courtesy Scott Bruhn/Nebraska Communications

The No. 1 Nebraska volleyball team takes its 4-0 start to the season to Albuquerque, N.M., for the Lobo Classic this week. The Huskers will play three matches in three days, beginning with an exhibition against Montreal University on Thursday at 6 p.m. (CT) at The Pit. Nebraska will play regular-season matches against Arkansas on Friday at 6 p.m. and New Mexico on Saturday at 8:30 p.m. Only Saturday’s match against New Mexico will be available for viewing. A free live stream link will be available at Huskers.com.

All of the action can be heard on the Husker Sports Network with John Baylor on the call and former Husker All-American Lauren Cook providing color commentary. All three broadcasts will air on 107.3 FM in Lincoln. Thursday and Friday’s matches will air on 105.9 FM in Omaha, and Saturday’s broadcast will air on AM 590.

• The Huskers are 4-2 all-time against New Mexico. The last meeting was a 3-0 Husker sweep on Aug. 27, 2011 in Albuquerque. The Huskers participated in the Lobo Classic that season, where they fell down 2-0 to a feisty New Mexico State squad before escaping with a 3-2 victory.

About the Huskers
• The Huskers have picked up where they left off in 2015, outhitting their opponents .363 to .143 this season. Serving, passing and defense triggered the Huskers’ run to the national title last season, and NU has excelled in those areas so far in 2016 with a 21-to-4 advantage in aces and a 38-to-15 edge in blocks.
• The Huskers’ .363 hitting percentage is second in the nation and leads the Big Ten.
• Nebraska ranks fifth nationally in kills per set (15.3) and leads the Big Ten.
• The Huskers rank in the top 20 nationally in assists per set (14th, 13.62) and blocks per set (19th, 2.92).
• Briana Holman’s .480 hitting percentage ranks fifth in the nation and first in the Big Ten.
• Kadie Rolfzen is fifth in the nation and leads the Big Ten with 0.69 aces per set.
• Nebraska carries a 20-match win streak into the week dating back to last season. It’s the Huskers’ longest win streak since 2008 (also 20). The Huskers won 29 straight matches spanning the end of 2006 and beginning of 2007. Since John Cook took over in 2000, the Huskers have won at least 20 straight matches nine times.
• The Huskers have won nine straight matches against ranked opponents.
• Nebraska’s .884 win percentage under head coach John Cook is the best by any program since Cook took over in the 2000 season.

Huskers Top AVCA Coaches Poll
• The Huskers remained at the top of the AVCA Coaches Poll that came out on Monday, for the second straight week as a unanimous No. 1. The Huskers collected all 64 first-place votes and have been at the top of the poll since winning the national title in 2015, four straight polls dating back to last season.
• The Huskers began the year at No. 1 in the preseason poll for the fifth time in school history (2001, 2005, 2006, 2007, 2015). The 2006 squad went wire-to-wire to win the national title. This year’s Husker team is aiming to become the first in program history to repeat as champions.
• NU’s No. 1 ranking marks the 89th poll all-time in which they’ve earned the top spot, the most in NCAA history.
• The Huskers have been ranked in the top 10 a total of 444 times, which is tied with Stanford for the most ever.
• Nebraska has appeared in all 497 AVCA Coaches Polls since it was established in 1982. Nebraska and Stanford are the only two programs to be ranked in every poll all-time.

Scouting Montreal
Montreal University, of the Canadian Interuniversity Sport (CIS), won’t open its regular season until late October. Head coach Olivier Trudel has built a solid program in Montreal, as the Carabins have won seven of the last nine Réseau du sport étudiant du Québec (RSEQ) championships. Montreal was fifth at the CIS Championships in 2015. Sarah Gosselin led the RSEQ with a .354 hitting percentage during the 2015-16 season, while Marie-Alex Belanger notched a league-high 286 kills on a .347 kills rate. Stephanie Lojen finished with 202 digs, and Gosselin nabbed 71 blocks.

Scouting Arkansas
• Arkansas is off to a 1-5 start under first-year head coach Jason Watson. The Razorbacks, however, pushed No. 4 Kansas to five sets in Lawrence, Kan., last Saturday before falling 15-8 in the fifth set. Arkansas has also played No. 21 Illinois (L, 3-0) and Maryland (L, 3-1). Arkansas has yet to play a home match this season. Danielle Harbin leads the team with 3.52 kills per set. Savannah Voelzke adds 2.09 kills per set and 2.70 digs per set. Breanna Jones is the team’s top blocker at 1.26 blocks per set. Arkansas is hitting .177 this season.

Scouting New Mexico
• The Lobos are 5-2 under Jeff Nelson, in his 10th year as head coach at New Mexico. New Mexico is led by Cassie House’s 3.38 kills per set. Julia Warren adds 2.68 kills and 3.24 digs per set and has served 10 aces this season. House and Warren, both seniors, are two-time All-Mountain West selections. Victoria Spragg leads the team with 1.14 blocks per set. Libero Ashley Kelsey provides 4.76 digs per set, and setter Carson Heilborn is averaging 7.88 assists per set. UNM is holding its opponents to .146 hitting.

Up Next
• The Huskers finish their non-conference schedule at the Ameritas Players Challenge in Lincoln next week. Nebraska will host Montana State and Gonzaga on Sept. 16 at Noon and 7:30 p.m., respectively. The Huskers will face Creighton on Sept. 17 at 8 p.m.

Three-Time All-American Kadie Rolfzen Leads the Attack
• Senior outside hitter Kadie Rolfzen was named a first-team AVCA All-American in 2015, her third career All-America honor but first selection to the first team. Rolfzen was also a unanimous All-Big Ten selection, her third straight season on the team.
• Rolfzen leads the Huskers with 3.38 kills per set and adds 2.38 digs per set. Her double-double (11 kills, 11 digs) against Texas was the 42nd of her career.
• Rolfzen ranks 13th in school history with 1,238 career kills. She has 984 career digs and is closing in on becoming the fifth Husker all-time with 1,000 career kills and 1,000 career digs.
• Rolfzen was the most valuable player at the Lexington (Ky.) Regional last season, as she recorded 20 kills and 15 digs in the regional final win over No. 1 Washington.
• Rolfzen was not only productive on the court, she excelled off of it. The graphic design major posted a perfect 4.0 GPA in 2015-16 to earn Big Ten Distinguished Scholar honors.

Amber Rolfzen Set to Build On Second-Team All-America Honors
• Senior Amber Rolfzen made a position switch from outside hitter to middle blocker before the 2015 season, and the switch resulted in second-team AVCA All-America honors and the Big Ten blocks title for the Papillion, Neb., native.
• Rolfzen is averaging 2.46 kills per set and 1.23 blocks per set and is hitting .381.
• Rolfzen was named to the All-America second team and the All-Big Ten Team after posting 1.58 blocks per set in 2015, which led the Big Ten and ranked fourth nationally. Her block average was the best by a Husker since Melissa Elmer’s school-record 2.17 in 2005.
• Rolfzen was named to the NCAA Championship All-Tournament Team after 10 kills and four blocks with a .625 hitting percentage in the championship win over Texas.
• Rolfzen accumulated three Big Ten Defensive Player of the Week honors in 2015.

Wong-Orantes Back For More After Breakout Season
• Senior libero Justine Wong-Orantes burst onto the national scene in 2015 with third-team AVCA All-America honors and the Big Ten Defensive Player of the Year award.
• Wong-Orantes is averaging 4.38 digs per set this season, which ranks fourth in the Big Ten.
• Wong-Orantes ranks third in school history with 1,465 career digs and is chasing Kayla Banwarth’s career record of 1,706. Banwarth is the starting libero for the U.S. Women’s National Team, and Wong-Orantes is trending on that path. Wong-Orantes played with the U.S. Women’s National Team at the Pan American Cup over the summer, averaging 4.8 digs per set while helping the Americans to the bronze medal.
• The Cypress, Calif., native averaged 4.55 digs per set with a total of 555 digs in 2015, the third most by a Husker in school history.

Experienced Hunter Leads Huskers as Captain Again
• Despite being in her first season as the Huskers’ starting setter last year, Kelly Hunter was picked as one of the team captains. Now a junior, Hunter is the Huskers’ lone captain as selected by head coach John Cook.
• Hunter was named the Big Ten Setter of the Week for the third time in her career after 12.43 assists per set on opening weekend, as well as 1.43 kills per set and 2.00 digs per set.
• The Papillion, Neb., native guided the Huskers to the national title in 2015 and received AVCA All-America honorable mention. She was named to the NCAA Championship All-Tournament Team after posting 42 assists, four digs and three blocks in the championship match.
• Hunter averaged 11.64 assists per set last season and totaled 1,501, the third most in the nation. She had 10 double-doubles and was the Big Ten Setter of the Week twice.

Foecke In Rare Company
• Mikaela Foecke was the NCAA Championship Most Outstanding Player last season, becoming just the third freshman to earn the honor, after 19 kills on .385 hitting in the championship win against Texas.
• This season, Foecke is averaging 2.92 kills per set and hitting .416.
• Foecke received AVCA All-America honorable mention and was a unanimous selection to the All-Big Ten Freshman team in 2015.
• Following her freshman season, Foecke was a finalist for the AAU Sullivan Award, presented annually to the top amateur athlete in the United States.

Holman Makes Long-Awaited Return
• Junior middle blocker Briana Holman made her first official appearance in a collegiate match since December 2014 when she took the court with the Huskers at the season-opening VERT Challenge. Holman transferred from LSU to Nebraska but did not receive her scholarship release, so she was forced to sit out the 2015 season.
• On opening weekend, Holman had an immediate impact. She was named the espnW National Player of the Week after averaging 2.57 kills and 1.43 blocks per set while hitting .571 in the wins over Florida and Texas. Holman had 10 kills and seven blocks against the Gators, and eight kills and three blocks against Texas with a .727 hitting percentage.
• Holman is averaging 2.31 kills and 1.38 blocks per set to lead the team in that category. She is hitting .480.
• Holman was a first-team AVCA All-American at LSU in 2014 with 3.94 kills and 1.47 blocks per set. She was a two-time All-SEC performer for the Tigers and represented the U.S. Collegiate National Team at the World University Games in South Korea in July 2015.

Malloy Brings More Experience to Husker Roster
• Senior transfer Andie Malloy gives the Huskers more depth and experience at outside hitter. A two-time All-Big 12 performer at Baylor, Malloy earned her degree in 2015 and had one season of eligibility remaining.
• Malloy is averaging 2.58 kills per set and 1.25 digs per set for the Big Red and has started every match.
• Malloy came to Nebraska after ranking second in the Big 12 in kills per set (3.89) and double-doubles (17) in 2015.