Nebraska Made Easy Work Of Northwestern In Sweep 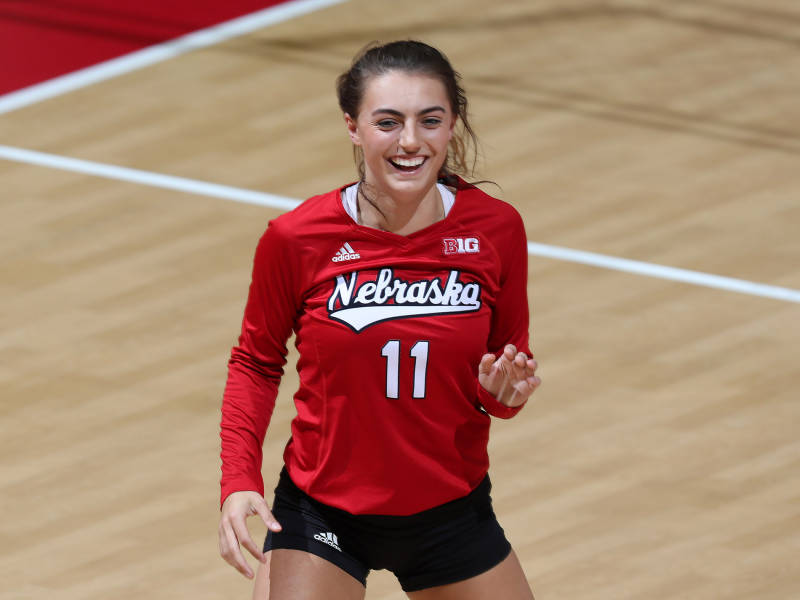 The Nebraska Cornhuskers handled Northwestern easily in a three-set sweep, despite a strong start for Northwestern in the first set. Current Photo via Nebraska Athletics

The Nebraska Cornhuskers handled Northwestern easily in a three-set sweep, despite a strong start for Northwestern in the first set.

Northwestern held a small lead over the Huskers in the first set but Nebraska fought back to tie things up at 8-8. A kill from Kelly Hunter brought Nebraska into the lead but Northwestern tied things right back up after a Husker service error. This back and forth fight continued until 13-13 when Northwestern once again picked up the lead on a kill from Symone Abbott and ace from Nia Robinson. Nebraska once again had to fight from behind and got things tied back up at 19-19. A 5-0 run brought the Huskers to a 24-19 lead including three kills from Jazz Sweet a kill from Briana Holman and a Northwestern serving error. Mikayla Foecke missed her serve to give the ball back to Northwestern but they followed her pattern and missed the final serve at 25-20.

The second set saw the Huskers take a quick 5-0 lead on kills from Foecke, Holman and a Kenzie Maloney ace. This lead for Nebraska continued to grow as they took a 20-11 lead late. Eventually, after a back and forth bout, Holman slammed down the final point of the set to make it a 25-15 second set score.

The third started much the same as the second, with a 6-0 Husker run to start things off. Northwestern struggled to find their groove in the final set of the match and ended things with two hitting errors at 25-12.

Foecke led the Huskers with 14 kills on a .500 hitting clip and two aces. Maloney picked up a match-best 15 digs while Annika Albrecht added in another 10. Lauren Stivrins posted a match-best four blocks in the win.

For Northwestern, Abbott led the losing effort with nine kills and six digs while setter Taylor Tashima dished out 28 assists and 11 digs for a double-double.

The seventh-ranked Nebraska volleyball team picked up a 25-20, 25-15, 25-12 sweep over Northwestern in front of a crowd of 8,103 at the Bob Devaney Sports Center on Friday night.

The Huskers improved to 15-4 overall and 8-1 in the Big Ten with their nation-leading 22nd straight home win. Northwestern fell to 12-9 on the season and 2-7 in Big Ten play.

Mikaela Foecke had 14 kills with three digs and two service aces to lead the Huskers. The junior hit .500 to pace the Huskers to a .378 hitting percentage on the night. Annika Albrecht had eight kills and 10 digs, and Jazz Sweet and Briana Holman each had seven kills while hitting .400 and .312, respectively. Lauren Stivrins had four kills and four blocks.

Nebraska held Northwestern to .140 hitting and sided out at 83 percent.  The Huskers held the Big Ten’s leader in kills, Symone Abbott, to just nine kills on .226 hitting. Abbott had seven kills in the first set, but Nebraska limited her to two kills on .000 hitting over the final two sets.

Set 1: Nebraska rebounded from a sluggish start to close the set on an 8-1 run and win 25-20. NU trailed by as many as three and was down 19-17 when a kill by Hunter and an ace serve by Foecke tied the score. Some clutch digs led to a Foecke back-row kill and a 20-19 Husker lead, and the Huskers would never trail again in the match. After a Northwestern timeout, Sweet terminated from the right side, and another tough serve by Foecke led to a Northwestern net violation and a 22-19 lead. Holman put a kill down at the middle of the net, and Sweet killed again for set point at 24-19. The Huskers earned the 25-20 win on a service error by Northwestern. Sweet led NU with five kills in the first set.

Set 2: The Huskers bolted to a 5-0 lead with Foecke providing three kills and Maloney serving an ace. A kill by Albrecht and a Wildcat error made it 9-3 Huskers. Northwestern pulled within 11-8 before committing an error and surrendering another kill to Foecke. Later, Foecke added two more kills and another ace, and Sweet notched a kill for a 4-0 spurt and an 18-10 lead. Stivrins, Holman and Albrecht each tallied a pair of kills down the stretch as the Huskers earned the 25-15 victory. Nebraska outhit Northwestern .432 to .143 in the frame. Foecke had seven kills.

Set 3: Nebraska got off to another strong start in the third set with a 6-0 lead on Albrecht’s serve. Northwestern got as close as four at 10-6, but Stivrins answered with a kill and a block with Hunter, which led to an 8-2 run and an 18-8 lead. Holman and Sweet combined for back-to-back blocks to put the Big Red up 22-10. Sami Slaughter entered the match and posted a block with Stivrins for match point, and the Huskers won 25-12.

Up Next: Nebraska hosts Illinois on Saturday at 7 p.m. at the Devaney Center. Former Husker assistant coach Chris Tamas brings his Fighting Illini squad to Lincoln for the first time since he took over as head coach in February. Saturday’s match is Nebraska’s annual “Pink Night” for breast cancer awareness.

Despite a hot start at the Devaney Center, the Wildcats dropped their match to No. 7 Nebraska on Friday night.

Northwestern finished within five points of the Huskers in the first set, led by the hitting prowess of senior outside hitter Symone Abbott, who accumulated seven kills on 13 swings, while not committing an error. As a team, the ‘Cats posted a .286 hitting percentage in the match opener, only totaling three errors, but fell, 25-20.

In the first set, Abbott surpassed Lindsay Anderson (2004-07) for sole possession of fourth place in the all-time kill list in Northwestern history.

The Wildcats struggled to muster a consistent offensive approach in the second set, but were able to persevere and tighten the match near the halfway point, trailing only 14-10 to the seventh-ranked team in the nation. The #B1GCats hit at a sub-.150 clip and dropped the second set, 25-15.

In the third set, senior setter Taylor Tashima netted her team-leading seventh double-double of the season, finishing with 28 assists and 11 digs. However, the Wildcats were unable to overcome the offensive firepower of Nebraska, and dropped the final set, 25-12.

Sophomore outside hitter Olivia Viscuso came off the bench and picked up three kills on seven attacks with no errors. Abbott led the team with her .226 hitting percentage, committing only two errors on 31 swings.

Northwestern finishes up their weekend conference play Saturday night at 7 p.m. at Iowa.