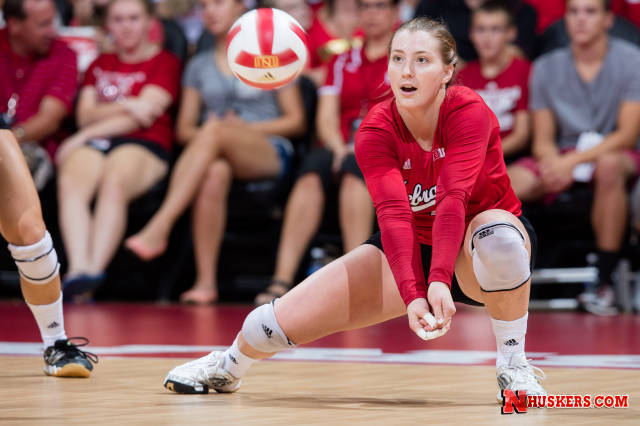 Annika Albrecht and the Nebraska Huskers beat Montreal, Arkansas, and New Mexico over the weekend in Albuquerque to hang on to their consensus #1 ranking. Archive Photo via Nebraska Athletics

The American Volleyball Coaches’ Association (AVCA) has released their week 3 NCAA Division I Women’s Volleyball Polls, and the Nebraska Cornhuskers, with a perfect 6-0 record, remain the #1 team in the nation.

They are one of 5 undefeated teams left in the top 25 rankings (#4 Kansas, #5 Washington, #9 BYU, #17 Santa Clara) as former second-ranked Wisconsin fell at the hands of North Carolina on Friday, who in turn lost to Minnesota on Saturday.

Other big movers included the University of San Diego, who jumped from 15 to 10 after wins against UC Irvine, #18 Colorado, and #11 UCLA over the weekend at the USD Invitational (including Colorado in a 3-0 sweep); and Purdue, who moved from 20 to 14 after beating 12th-ranked Stanford and Cal Poly at the Stanford Invitational over the weekend.

Teams have one more week of non-conference, largely invitational-style play this week before moving into conference schedules the week after.

Four teams mentioned on only one ballot for a total of 21 combined points.