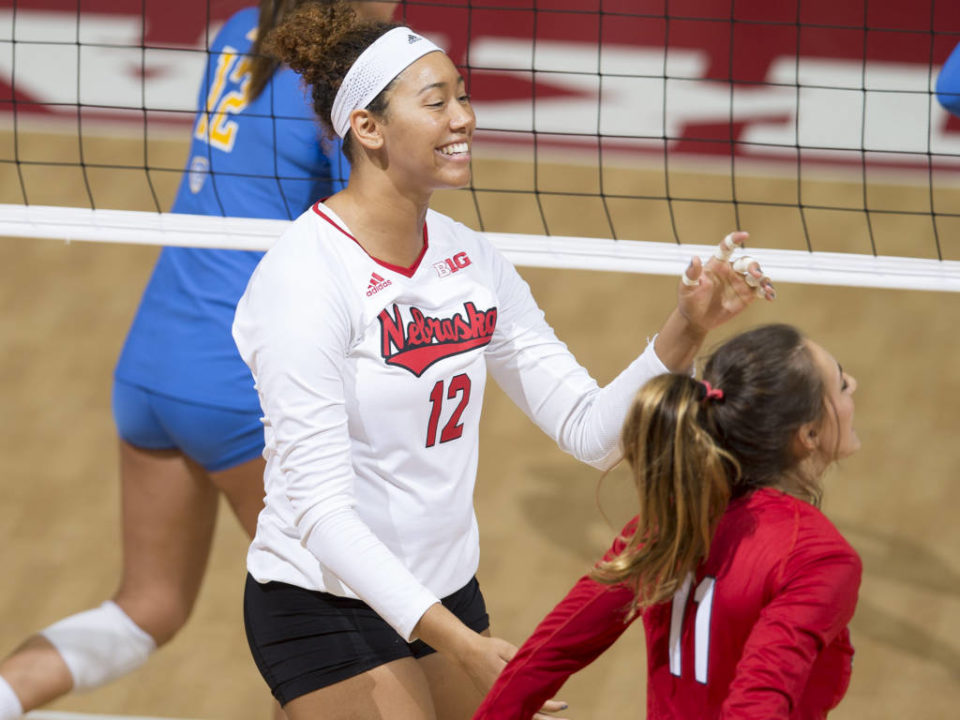 Nebraska took down Michigan State on the road, to make it the first time that the Spartans have lost on their home court this season.  Current Photo via Nebraska Athletics

The match was primarily one-sided, aside from a mishap in the second set for the Huskers. They dominated the court over Michigan State, keeping them under 20 points in each of the three sets they won.

Though it looked like the Huskers dominated by the looks of the score, the stats tell a different story aside from a few categories. Nebraska led in nearly all statistical categories but not by too many. What made the difference in the match were the errors committed by Michigan State. The Spartans made 23 hitting errors to Nebraska’s 16 along with 12 service mistakes to the Huskers seven. These mistakes proved to be costly for the Spartans, as it shoved the momentum straight to Nebraska’s side of the court.

Throughout the match, even in the second set, Nebraska never let up on their aggressive swings and play. They served a tough match at the Spartans who struggled to receive the strong Husker serve as they posted eight aces in the win. Along with that Nebraska led in kills 49-43. This also showed defensively, as they out-dug Michigan State 61-53 and blocked 10 balls to the Spartans seven.

For Nebraska, Mikaela Foecke led the squad with 14 kills and one error for a .394 hitting percentage that also included five digs, three blocks and one ace. Jazz Sweet also contributed double-digit kills with 11 while Annika Albrecht nearly clinched the double-double with nine kills and 13 digs. Setter Kelly Hunter dished out 37 assists and 13 digs for a double-double while also contributing four kills, three aces and two blocks. Kenzie Maloney led the team with 16 digs.

Autumn Bailey and Brooke Kranda led the Spartans with nine kills apiece while Alyssa Garvelink and Holly Toliver posted another eight for the losing squad. Jamye Cox picked up a match-best 18 digs.

The Huskers outblocked the Spartans 10-7, which helped the Huskers to a .262 to .144 hitting advantage. The Huskers also won the serve game with two more aces (8-6) and five fewer errors.

Autumn Bailey and Brooke Kranda each had nine kills for the Spartans, who had their second-lowest hitting percentage of the season. In fact, two of the Spartans’ lowest three percentages of the season have come against the Huskers.

Set 1: The Huskers took their first lead at 5-4 after a scramble on both sides of the net resulted in a kill by Albrecht, and NU would never trail again. A solo block by Holman and a kill by Sweet added to the lead at 7-4. The Spartans tied the set 7-7 before an Albrecht kill. Later, a block by Hunter and Stivrins, followed by a tip kill by Foecke, lifted the Big Red to a 13-10 lead. The Huskers went ahead 22-13 after a 7-1 spurt that included two kills by Sweet and one by Stivrins, as well as two blocks by Sweet – one with Holman and one with Stivrins. NU had four blocks in the set and won 25-16, outhitting the Spartans .379 to .118.

Set 2: Michigan State led 5-2 before Foecke posted a pair of kills around a block with Holman to tie the set. Maloney’s service run continued with an ace, and Foecke tallied another kill before a Michigan State attacking error made it 8-5. Similar to the first set, the Spartans answered the Nebraska run with three straight points to tie the set at 8-8. Michigan State committed a service error, and Hunter followed that with back-to-back aces for an 11-8 Husker advantage. Michigan State responded and evened the set at 13-13, and the Spartans claimed a 15-14 lead on an ace. Michigan State went on to score the next two points for a 4-0 run and a 17-14 lead. Stivrins won a joust at the net to get the Huskers sideout, but the Spartans extended the lead to 22-17. The Spartans finished off the 25-19 win to even the match.

Set 3: The Huskers trailed 4-1 and could only cut the deficit to one before the Spartans increased their lead to four, 9-5. Stivrins smashed a kill and combined with Hunter for a block, and Townsend served an ace before an MSU hitting error tied the set at 9-9. Nebraska took an 11-10 lead, its first of the set, after a kill by Albrecht and solo block by Foecke on consecutive rallies. After MSU tied it at 11-11, Foecke and Hunter posted back-to-back kills. At 13-12, Foecke pounded another kill and teamed up with Holman for a block to spark a 7-0 Husker run that put them ahead 20-12. Holman had two more kills in the run while Foecke had one, and Hunter highlighted her service run with her third ace of the night. After trailing 9-5, the Huskers reeled off a 15-3 run to take control. A block by Albrecht and Stivrins made it 23-16 Nebraska, and Sweet earned set point before Townsend capped off the 25-17 win with an ace. NU hit .250 and held the Spartans to .054 while once again notching four blocks in a set.

Set 4: The teams traded sideouts for the first 12 rallies until Michigan State hit wide to give NU a 7-6 edge. A third ace by Townsend made it 8-6 Huskers and forced a Spartan timeout. Foecke’s 13th kill of the night put the Huskers ahead 12-8. Nebraska continued to excel on the attack with kills by Hunter, Holman and Foecke – as well as a solo stuff by Holman. The 5-0 continued as Michigan State hit wide, making the score 17-9 Huskers. The lefty Sweet pounded three more kills – including one that she punched over with her right hand – and the Huskers cruised to a final score of 25-14. The Huskers hit a blistering .367 in the final set.

Up Next: Nebraska takes on Michigan on Sunday at Cliff Keen Arena in Ann Arbor. That match begins at Noon (CT) and will be televised on ESPNU and broadcast on Husker Sports Network affiliates, including 107.3 FM in Lincoln and AM590 in Omaha.

MSU was plagued by 12 service errors and some tough serving from the Huskers, who finished with eight aces on the night. The visitors also held a 10-7 edge in blocks and hit .262, while the Spartans hit just 144 (right below the Husker’s league-best .162 allowed to opponents this season). MSU rallied to tie the match at 1-1 after falling by nine points in the opening frame, but the Huskers got back on track during the set break and took a 25-17 win in the third and rolled to a 25-14 win in the fourth set.

MSU struggled to establish or maintain much rhythm at any point of the match, as the visitors accomplished the task of keeping MSU out of system. Mikaela Foecke led the Huskers with 14 kills, hitting .394; freshman Jazz Sweet had 11 kills and added four digs and a pair of blocks.

For MSU, Autumn Bailey and Brooke Kranda each had nine kills, while Alyssa Garvelink had eight kills and five blocks.

QUOTABLE
“Nebraska was on point with their strengths tonight – they served well and were aggressive from start to finish. We simply made too many errors to give ourselves a chance – 12 service errors and 23 hitting errors are not a recipe to be successful any night in the Big Ten. It’s disappointing to start off a homestand this way, but we have an opportunity to get things back on track to try to redeem ourselves tomorrow when we host Iowa..”